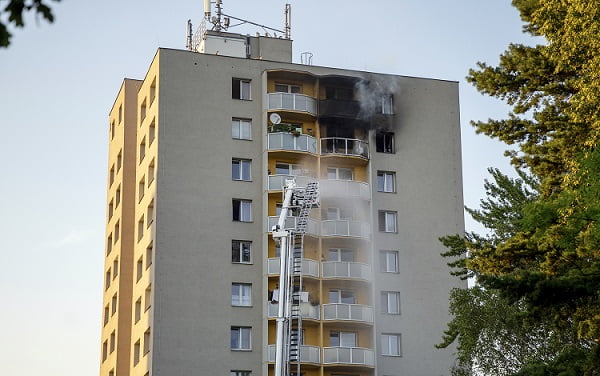 Five died after jumping from the 12th floor

PRAGUE (AP) — At least 11 people have been killed and 10 others injured in an apartment building fire in the northeastern Czech Republic, officials said Saturday, with some suggesting that the fire could be arson.

Police said the fire hit the 11th floor of the 13-story building in the afternoon in the town of Bohumin. Firefighters spokesman Lukas Popp told local media that six people, three adults and three children, were killed in an 11th-floor apartment.

The other five died after trying to escape from the building “in a panic” by jumping from the windows on the 12th floor, Interior Minister Jan Hamacek told Czech public radio.

Hamacek and the head of the regional government, Ivo Vondrak, both suggested the fire was likely intentionally set. Regional firefighter chief Vladimir Vlcek said it was unusual how quickly the fire spread through the entire apartment but said authorities were still investigating the cause of the fire.

Kuzel said at least 10 people were injured in the fire, while Hamacek said one firefighter suffered a serious injury.

Five died after jumping from the 12th floor     PRAGUE (AP) — At least 11 people have been killed and 10 others injured in an apartment building fire in the northeastern Czech Republic, officials said Saturday, with some suggesting that the fire could be arson. Police said the fire hit the 11th floor of […]
