A Look Back: The McDonnell Douglas Suspended Maneuvering System
 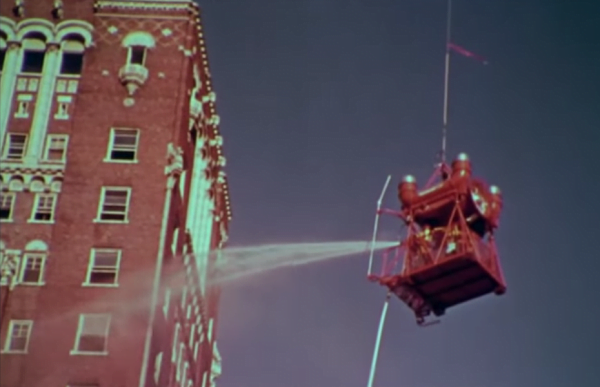 The McDonnell Douglas Suspended Maneuvering System (SMS) was designed for fire / rescue activities in multi-story buildings and skyscrapers. To date it remains one of the only systems of its kind to be successfully demonstrated.

Swung on a tether beneath a helicopter, the SMS platform could be used to recover victims and deploy firefighters from locations which would ordinarily be beyond the reach of ladder engines.

A self-contained module, the SMS was developed from vertical takeoff and landing aircraft technologies which allowed it to achieve unmatched stability.

The unit never went beyond the prototype stage, despite successful demonstrations, and only the Los Angeles Fire Department actually fielded the SMS.

This film was made during one of the field tests in Kansas City. Watching it in action, one has to wonder how it might have functioned in the heat and smoke of an actual high-rise conflagration. Could this type of rescue device have made a difference in the World Trade Center Disaster, as some have speculated? Watch and make up your own mind! (BTW the SMS prototype still exists and is now property of the LAFD museum collection.)

This film is part of the Periscope Film LLC archive, one of the largest historic military, transportation, and aviation stock footage collections in the USA. Entirely film backed, this material is available for licensing in 24p HD. For more information visit http://www.PeriscopeFilm.com

High-rise firefighting demonstration in 1979     Periscope Film The McDonnell Douglas Suspended Maneuvering System (SMS) was designed for fire / rescue activities in multi-story buildings and skyscrapers. To date it remains one of the only systems of its kind to be successfully demonstrated. Swung on a tether beneath a helicopter, the SMS platform could […]
