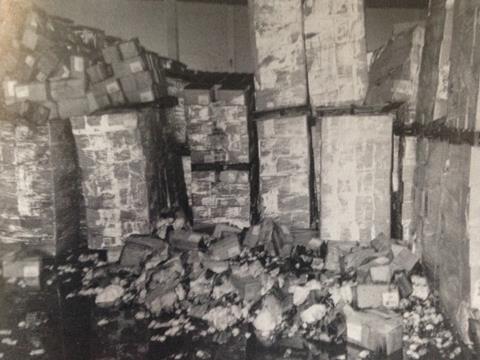 Empty bottles had to be filled in the freezing cold

Sometimes the most bizarre jobs present the best lessons.  One fire in particular, which we referred to as “The Dog Bone Fire,” was a master class in the challenges of fighting fire in a large warehouse structure. We learned a lot about managing building contents and materials, hazard assessment, cold smoke issues, darkness, air management, ventilation, command and control, and more.

Here’s how The Dog Bone Fire unfolded.  We responded to a water flow alarm at about 2:30 a.m.in near zero degree temperatures. The building was located in the industrial section of North Bergen, NJ on the extreme west side of the region. It was a very large footprint one-story Class II non-combustible warehouse.  I was a Battalion Chief at the time and first-arriving along with Squad 1.  We were met by a lazy but moderately heavy smoke condition issuing from the interior of the warehouse section.  This warehouse was owned by a corporation that manufactured pet food and products.  Using a lifeline and a thermal imaging camera, we followed the smoke and the sound of the water flowing from the activated sprinkler, and came upon an area of densely-packed, highly-stacked cardboard boxes that were shrink-wrapped to hold them together.

This fire presented several challenges that required some on-the-spot adjustments.  The fire, in the middle of the palletized stock, had caused the shrink wrap to melt. The water affected the integrity of the cardboard boxes so the stock was listing and ready to fall.  In fact, as we began to move stock to get to the fire area, the boxes began to fall in all directions, spilling the stock, which were large bags of rawhide dog bones.  This led to the listing of uninvolved stock as the water began to affect the stability of the surrounding areas.

Collapse zones were established and the amount of personnel in the area minimized.  We used one team on the charged hoseline, one team to operate as overhaul, and one team of two to move the stock.  Everyone else was kept in staging in a clear area where SCBA was not needed.  We placed a lifeline about three feet off the ground as a guide from the staging area to the operational area where we had a gatekeeper and interior accountability officer (though we didn’t call it that at the time). They were assigned to track personnel movement in and out of the operational area.  We used a right-hand-in, right-hand-out movement coordination so no one would run into each other on the guideline.

The smoke was obscuring the seat of the fire and the pallets were placed tight, so we had a hard time deciphering which pallet was actually the pallet on fire.  Through the lens of the TIC, I could see the fire, but due to the smoke, I could not tell how far into the pile it was.  To get to it, we had to move many pallet stacks, creating more stock collapses.  Dog bones, cardboard and wood pallets were everywhere. We let the sprinklers continue to operate because we did not want to lose control of the fire.  The sprinklers were controlling the fire and since we had limited access to it, it was best to let them continue to operate.

We also established a “dump” area near the front loading dock doors where we could pull apart the smoldering stock and finish extinguishment of same.  A small diameter line was stretched to this area and additional overhaul personnel were assigned to pull apart the boxes.  The TIC came in very handy in identifying when the correct pallet stack was accessed by the forklift.  I kept the camera trained on the fire and once I saw it starting to move, I knew that we had the right pallet stack.  It was moved to the dump area and extinguished.  There were, however, still many boxes that had fallen in the fire area that were still smoldering.  This required using large on-site wheeled bins to move the debris to the dump area.

Here are some of the lessons learned at The Dog Bone Fire:

Stock issues:  When working around boxed inventory, try to determine the contents and operate accordingly.  Utilize MSDS sheets, inventory sheets, the warehouse manager – anyone and anything that can help identify what is involved.  Using water may not be appropriate in some instances.  Be informed.  Hose stream-instigated collapse of stock is also a major issue especially when stock is piled high and contains heavy items.  We once had a fire where again the sprinklers destroyed the integrity of the boxes, but this time instead of dog bones, industrial-sized cans of tomato sauce were falling off the top of the fifteen foot high pallet stack.  We heard loud thuds in the fire area, but we did not know what was making the noise until a large can of sauce came rolling past us as we accessed the area.

Shrink-wrap:  Easily melted by the heat of a fire, destruction of the shrink wrap can cause large piles of stock to list and collapse.  Once we began moving stock away with the forklift, this became more apparent and more problematic.

Depth and height of stock:  Stock is often piled high and deep.  It may prevent easy access.  Devise a plan, figure out how to move the stock, and minimize personnel in the path of this removal.  Remember also, the longer it takes us to get to the seat of the fire, the more it may grow if the sprinklers are not being effective (or the more it may degrade as the water hits it).

Cold smoke issues:  Cold smoke was a major issue at this fire.  It was a nuisance, and even though it was not hot, it still required SCBA in the area of operations.  High levels of CO and visibility issues can be expected.  Don’t get complacent.  Stay on mask. CO kills.

SCBA needs:  The smoke was lazy and thick and companies went through a large amount of SCBA.  The empty bottles had to be carried out to the MSU and filled in the freezing cold.  If this building had a firefighter air replenishment system (FARS) installed, this operation would have been infinitely more efficient (and warmer).  FARS systems installed in strategic places in the building will minimize cylinder down time and create a safer fireground.  One of the coolest features of the FARS system is that firefighters can refill their cylinders at full respiration.  This means while they are still on air.  How cool is that?  In an emergency where a firefighter is running out of air and trying to escape, the value of this cannot be overstated.

Darkness:  It was night time.  Once we determined where the fire was and that it was not going anywhere, we found it easiest to turn on the lights.  We didn’t do this right away, but once we did, it helped tremendously with the overhauling, movement of personnel, and the overall safety profile.

Alarms:  The blaring of the alarms did not help matters.  Again, once the seat of the fire was found, the alarms were silenced.  We let the sprinklers continue to operate until we moved the burning pallet stack away to the dump area.  Then we shut them down.

Hoseline Management:  It is critical that improper and careless stretching of lines does not create additional issues.  Hoselines that are stretched around a corner will always take the path of least resistance.  If that path includes stock which is listing or may not be palletized at all, it might collapse and trap firefighters on the bad side of the problem. It is important to manage the turns.  This was a sprinkler-controlled fire. When you have the situation such as this it might be best to let the charged line stand by at the ready while the recon team with a lifeline and TIC find the fire area.  Then order the hoseline to follow the lifeline to the fire area.  It is much easier to alter the route and re-deploy a lifeline than it is to reposition a charged large diameter handline.

Ventilation:  Once the fire was under control, with the assistance of the maintenance people from the building, we used the HVAC system to clear the area.  It did so very quickly.  Make sure you don’t this haphazardly. It can create a disaster.

Command and control:  A large warehouse is like a high-rise lying down, but without the compartmentation.  As such, strict command and control protocols must be established and understood, preferably before an incident.  An Operations Division must be established as well as a Staging area and Resource Division.  These areas can be on the interior, but in an area where fire operations are not being conducted, such as behind fire doors or on loading docks.  Use a gatekeeper position that works closely with the Accountability Officer to assist in tracking personnel.  A Chief Officer should also be assigned to the area of the firefight.  He can be called Forward Operations for lack of a better term.  His duty is to monitor and coordinate attack / stack movement / overhaul operations.  If the sprinkler is controlling the fire, let it run and keep working personnel to a bare minimum.

Hazard Assessment:  Keep in mind that most of these buildings are constructed using lightweight steel bar joists or some kind of truss including bowstring:  .  If sprinklers are not controlling the fire and the trusses are being exposed, defensive operations, at least in the fire area, is are recommended.  Use the reach of the stream, cool the trusses, and attempt to knock the fire down from a distance.  Continuous monitoring of conditions is critical in these situations.  Don’t put personnel in harm’s way for just a building.