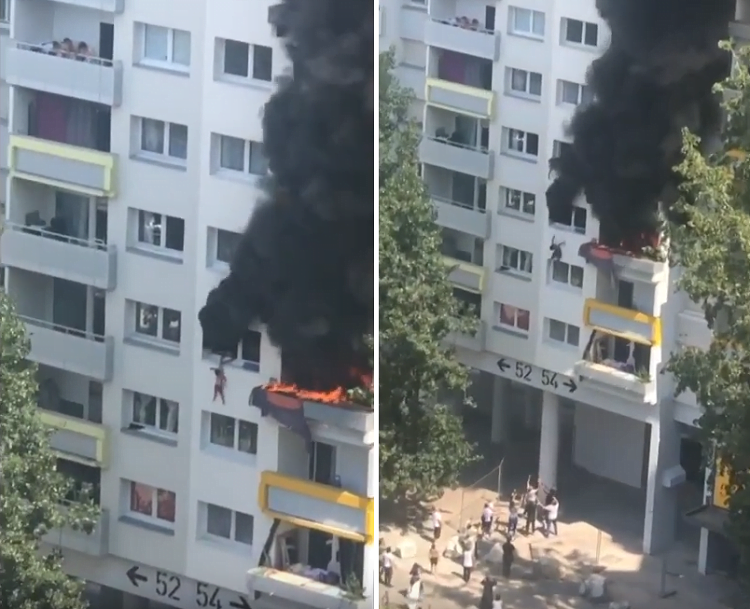 Two children aged 3 and 10 miraculously escape a fire in Grenoble by jumping a dozen metres from the third floor into the arms of adults below their building. (AFP News Agency)

PARIS (AP) — A boy and a toddler escaped from a blazing apartment in the southeastern French city of Grenoble by dropping 10 meters (33 feet) from a window and being caught by members of the public. French media said that the two brothers were unharmed by the fall, but might have suffered some smoke inhalation.

Footage of Tuesday’ dramatic rescue showed one of the brothers being dropped out of the window at least three stories up in the building as flames engulfed a balcony and black smoke billowed from windows. To a chorus of screams from onlookers, the older brother hung out of the window and then let himself fall into the arms of the rescuers gathered below.

The boys were hospitalized along with 17 of the building’s residents after inhaling fumes, according to French media. Four of the people who caught the boys were also hospitalized to check if any bones were fractured by the impact of the jumps.

Athoumani Walid, 25, a student in Grenoble, broke one of his wrists as he helped catch the children.

He heard screams and went out to investigate after seeing the fire from his nearby apartment. With four of five other people, he immediately tried to help.

“We didn’t know what to do, but we walked up” to the apartment that was in flames, Walid told The Associated Press on Wednesday. “We wanted to break the door but it wasn’t possible.” So they walked back downstairs and shouted out for the boys to jump in their arms.

Although he was initially afraid for the boys, “when they jumped, fear disappeared, what mattered was to catch” them, he said.

Walid hopes the rescue will change people perceptions of the Villeneuve neighborhood of Grenoble where the events happened, and where there is a large immigrant population.

“We are told it’s a ‘sensitive’ neighborhood,” Walid said, “but yesterday we showed we are here for each other, and we save each other.”

Eric Piolle, the Grenoble mayor, congratulated the Villeneuve residents on the rescue, which he said underscored the city’s “tradition of solidarity and mutual help.”

In May 2018, a young Malian migrant rescued a child dangling from a balcony and was offered French citizenship. Video of the rescue showed 22-year-old Mamoudou Gassama climbing up four floors of the apartment building in just seconds to rescue the child, to cheers from onlookers. By the time Parisian emergency services arrived at the building, he had already pulled the child to safety.

Video shows dramatic falls from burning apartment     By ARNO PEDRAM Associated Press PARIS (AP) — A boy and a toddler escaped from a blazing apartment in the southeastern French city of Grenoble by dropping 10 meters (33 feet) from a window and being caught by members of the public. French media said that […]
