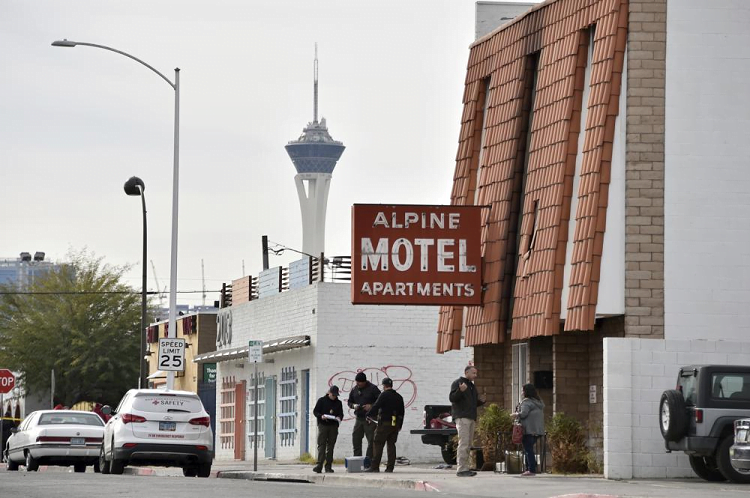 FILE – In this Dec. 21, 2019, file photo, investigators work at the scene of a three-story apartment complex fire in Las Vegas. Aging multi-unit and extended-stay buildings in Las Vegas that have been converted from motels or hotels to apartments will be regularly inspected as a legacy of the deadliest residential fire in the city’s history in December 2019, city officials decided. (AP Photo/David Becker, File)

LAS VEGAS (AP) — Aging multi-unit and extended-stay buildings in Las Vegas that have been converted from motels or hotels to apartments will be regularly inspected as a legacy of the deadliest residential fire in city history, officials decided.

A program approved this week by the City Council calls for code enforcement visits at least once a year to properties built before 1981 that have four or more units, the Las Vegas Review-Journal reported. The building and safety inspections can be more frequent if violations are found.

The move comes 16 months after six people were killed and more than a dozen were injured in a smoky pre-dawn fire in December 2019 at the Alpine Motel Apartments.

Some residents reported having used ovens for heat and climbing out of second- and third-story windows to escape smoke and flames. Several perished trying to escape through locked exit doors.

The fire in the low-budget rental property near the downtown casino corridor led to finger-pointing, investigations and legal fights that are still pending — including felony charges against the building owner, Adolfo Orozco Garcia, and building manager Malinda Mier, and civil negligence lawsuits against Orozco Garcia and his property company, Las Vegas Dragon Hotel LLC.

Mayor Carolyn Goodman on Wednesday called the fire a tragedy that prompted a review by city staff members.

“It was a very deep and intense look at everything,” the mayor said during a council meeting, “to make sure that we were protecting the lives of residents.”

“We do not like slum landlords that don’t keep their property up and put people’s lives at risk,” she said.

City Operations and Development Chief Tom Perrigo said the inspection program will focus on 28 properties, mostly downtown, that had been overlooked after being converted to apartments.

The Alpine, built as a motel in 1972, had a history of fire code violations and police calls for service before the deadly fire.

An award-winning investigation by the Review-Journal found the property had not been inspected by fire officials for nearly three years, and that despite many calls for police service, officials declined to designate the Alpine a chronic police nuisance that could have been shut down.

Inspectors found the fire started with an unattended stovetop in a first-floor apartment. Residents later complained there had been a lack of heat in the building on a chilly winter night with temperatures in the 40s.

The newspaper documented that the audible fire alarm had been silenced a month before the blaze and that a property manager had ordered an emergency exit door bolted shut.

Perrigo said properties getting new scrutiny were constructed before the adoption of stringent building codes that required safer fire and structural systems.

The city will be able to issue notices of violations and orders to comply, which could lead to civil or criminal citations for properties that are not up to standard, according to the ordinance.

It will be illegal to rent a unit that had not passed inspection, and property owners would face sanctions if they don’t adequately respond following numerous police calls.

The city will promote training property owners and tenants about their rights and responsibilities, and each floor of a property will have to have at least one sign saying that concerns about fire and safety issues can be reported by phone to the city.

Crear, whose district includes the Alpine, termed the law “a call to a response of some tragic incidents that have taken place over the last few years in (the) downtown corridor.”

Of 13 people injured in the Alpine Motel Apartments, five were initially hospitalized in critical condition, including a pregnant woman.

The fire was the deadliest in the Las Vegas area since November 1980, when 87 people died and more than 700 were injured in a spectacular blaze at the MGM Grand Hotel on the Las Vegas Strip. The hotel is now Bally’s Las Vegas Hotel & Casino.

Those two fires led to public policy changes and upgraded safety standards, including requirements for fire sprinklers in high-rise buildings throughout the state.

All contents © copyright 2021 The Associated Press. All rights reserved.

Law targets properties built before 1981 that have four or more units     LAS VEGAS (AP) — Aging multi-unit and extended-stay buildings in Las Vegas that have been converted from motels or hotels to apartments will be regularly inspected as a legacy of the deadliest residential fire in city history, officials decided. A program […]
