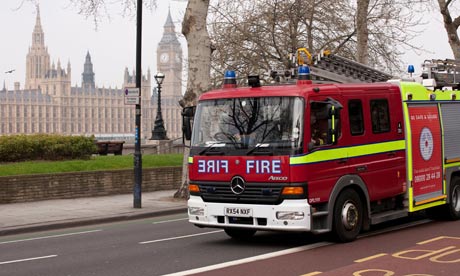 Government plans to privatise more emergency services have been thrown into question after it emerged that debts at the private company operating London‘s fleet of fire engines threaten its ability to tackle blazes in high-rise buildings.

A report obtained by the Observer, written by the London Fire and Emergency Planning Authority, warned that AssetCo, which owns the capital’s 500 appliances and 50,000 pieces of critical safety kit, was beset by crippling financial problems that were affecting its aerial operations in particular. These involve the high-reach appliances used to tackle fires in offices and large industrial blazes that are considered to be of critical importance in the capital.

The report notes: “The overall availability of the aerial fleet continues to be poor because of the ongoing excessive downtimes for maintenance, repairs, fault diagnosis and technical investigations. AssetCo has not yet achieved a maintenance and repair regime for the aerial fleet which brings downtimes within acceptable levels.”

AssetCo, which wants to concentrate on its business in the United Arab Emirates, admitted in its annual report that it was in default on borrowing of more than £78m and was “likely to be in breach of a wide spectrum of financial covenants”.

The company’s astonishing meltdown will lead to MPs tabling an early day motion in parliament later this month, calling for the company’s £20m contract to be taken back into public ownership.

The company is trying to sell its London operations, but AssetCo’s directors warn there is “significant doubt about the ability of these companies to continue as a going concern”.

AssetCo’s annual report reveals that its “financial difficulties” have resulted in shortfalls in the service it provides. “The financial crises had caused the diversion of AssetCo’s management focus from the normal business activities of delivering the service,” the company explains. “The uncertainties arising from the financial crises had also affected staff morale in AssetCo and a number of staff departed from the company’s employment. These effects in turn have resulted in AssetCo underperforming in some areas of the contract, such as late provision of information, late equipment deliveries and a deteriorating trend of increased time taken to complete vehicle repairs.”

The company’s plight is a concern for re-elected London mayor Boris Johnson and the coalition government and will be used as ammunition by those who oppose further privatisation of the emergency services. The government wants to privatise the national Fire Service College and allow private firms to run some police operations. London’s mayor has announced an intention to privatise the fire service’s London control centre.

The Fire Brigades Union said the London Fire Service should follow the example of Lincolnshire that, until recently, also had a contract with AssetCo, which it then cancelled.

“AssetCo’s London subsidiary is in dire straits and could collapse or be put up for sale at any moment,” said Matt Wrack, the FBU’s general secretary. “In the run in to the Olympics either of these options would be a disaster for London. There is complacency and indecision at the very top of London fire brigade management. Lincolnshire took decisive action and took back control of their assets, London is still dithering.”

Government plans to privatise more emergency services have been thrown into question after it emerged that debts at the private company operating London‘s fleet of fire engines threaten its ability to tackle blazes in high-rise buildings. A report obtained by the Observer, written by the London Fire and Emergency Planning Authority, warned that AssetCo, which […]
