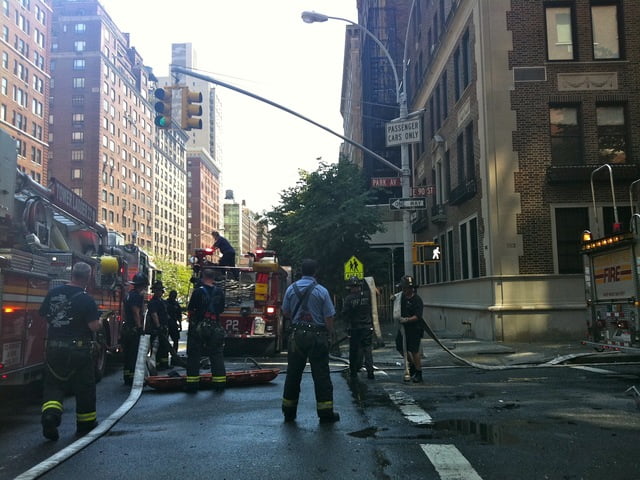 UPPER EAST SIDE — A fire broke out near the top of a Park Avenue high-rise Friday afternoon, the FDNY said.

Eighty firefighters responded to the blaze in the rear bedroom on the 14th floor at 1112 Park Ave. at East 90th Street about 1:45 p.m., an FDNY spokesman said.

Two women, a housekeeper and a resident of the unit, were inside when the fire sparked. They escaped without injury, said FDNY Battalion Chief Robert Holzemeyer.

The fire spread to the bathroom, kitchen and hallways, but was under control about 35 minutes later, Holzemeyer added.

Five firefighters suffered minor injuries, an FDNY spokeswoman said. Three were treated at the scene and the other two were transported to New York Presbyterian Hospital and Lenox Hill Hospital.

There were no other injuries, officials said. The cause was under investigation.

Eighty firefighters responded to the blaze in the rear bedroom on the 14th floor at 1112 Park Ave. at East 90th Street about 1:45 p.m., an FDNY spokesman said.
