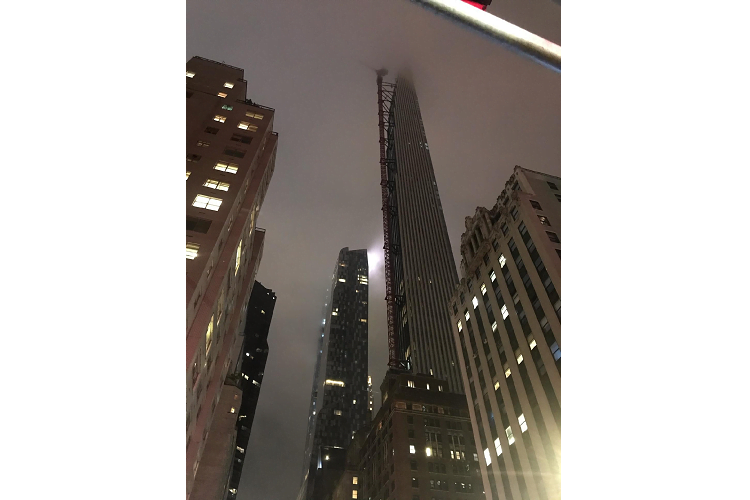 Cable was striking building and sending debris to the streets below

MANHATTAN – At 6:42 p.m. our units received a call for debris falling from a building on 57th Street. Upon arrival they noticed some debris in the street and noticed that there was debris continuing to fall.

Due to the wind and the fog conditions, they could not see up to the building. We quickly sent Rescue Company 1 into the building to make an assessment, and we started to immediately clear the streets to get everybody away from the danger.

The Rescue Company got up to the upper floors of the building and realized that there was a tower crane with a cable hanging from the boom that was a little lower than it should have been, and it was spinning around and hitting the building, and knocking debris down into the street.

Currently, the good news is the crane is secure. We were able to get the crane operator up into the crane, to secure that cable that was loose,” says FDNY Assistant Chief John Hodgens on scene of a crane incident at 111 West 57th Street and Sixth Avenue in Manhattan.

Chief Hodgens says, “We have no injuries reported from the incident. It’s an ongoing operation. There is still some debris that is precariously hanging on the building, and we are working with the construction company and NYC Buildings to secure it. It’s going to be a prolonged operation.”

Cable was striking building and sending debris to the streets below     Fire Department City of New York MANHATTAN – At 6:42 p.m. our units received a call for debris falling from a building on 57th Street. Upon arrival they noticed some debris in the street and noticed that there was debris continuing to […]
