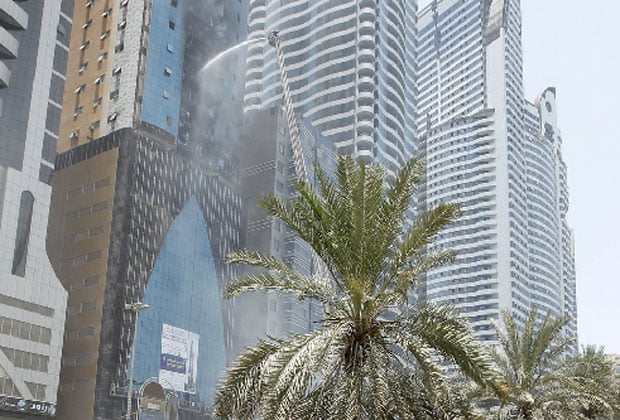 SHARJAH — A massive fire broke out on Sunday at a tower block under construction in Al Buhaira Corniche, Sharjah, gutting 14 floors, including the mezzanine floor.

The fire broke at 11.30am while workers of the company that had the building contract were carrying out finishing work in the 42-storey building.

Brigadier Abdullah Al Suwaidi, Director General of Sharjah Department of Civil Defence, confirmed there were no casualties as the workers were quickly evacuated from the building when the fire started.

He said that the tower block was newly constructed and the workers were at the site when the fire broke out. The main reason that led to the fire is unknown and the forensic laboratory of Sharjah Police will issue a report about the cause soon.

The fire started on the first floor and due to the wind quickly spread to the upper floors, including the mezzanine floor. The fire gutted the façade of the building which was constructed using flammable material that caused similar incidents in other tower blocks in Sharjah.

As soon as the operation room received the call, the fire engines from Samnan, Al Mina and Muwailah were dispatched and reached there on time.

They doused the fire in two hours, then started the cooling operation that continued for two more hours. The police cordoned off the area and organised traffic in the street.

The firefighters managed to control the fire and prevented it from spreading to other upper storeys or surrounding buildings.

A massive fire broke out on Sunday at a tower block under construction in Al Buhaira Corniche, Sharjah, gutting 14 floors, including the mezzanine floor.
