Fire in the Sky
 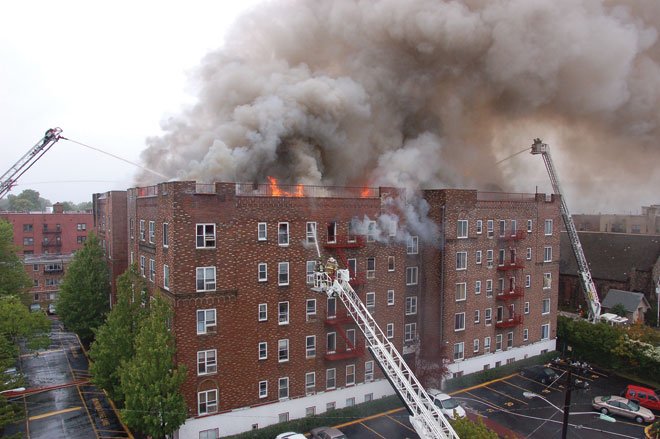 Authors’ note: Reflecting on the 10-year anniversary of the horrific attacks on America at the World Trade Center (WTC) and the Pentagon, and the thousands of people who lost their lives that tragic day—including the 343 brave personnel from the FDNY—brings back many terrible memories and feelings. For those who lost loved ones, friends, children and brother firefighters on September 11, this anniversary is particularly painful, and we continue to grieve with them.

As we recall the magnitude of the events that occurred that day, as well as the fires that occurred within the WTC buildings, we dedicate this article to the brave FDNY firefighters who risked their lives to combat those fires and save thousands of people in the WTC Towers and surrounding buildings.

High-rise fires are challenging incidents at best. To be properly prepared, you must develop alternative methods of attacking the fire and maintaining an adequate water supply. You must also be prepared for the day when you may be called up to evacuate and/or rescue hundreds, maybe thousands of people, from a major high-rise structure. Photo Bill Tompkins

High-rise fires are far from the “routine” responses we make on a regular basis and should always be treated as such. Throughout the history of the American fire service, there have been several large high-rise fires that have resulted in lives lost and multiple floors destroyed (e.g., the One Meridian Plaza Fire). But no fire has or hopefully will ever compare to those that occurred in the towers of the WTC.

As the events of that day unfolded, thousands of firefighters across this country were glued to the TV. If you were like us, you were thinking to yourself that your brothers in the FDNY were going to be in an extreme, if not impossible, fight that could result in firefighter lives lost. As firefighters, we also thought about how you could even begin to attack the fires and try to stop their progress.

What these fires and the others that came before and after them have proven is that as firefighters in and around metropolitan areas, we must be prepared for responses that are “outside the box,” or beyond the norm. In this article, we’ll take a look at how we can start to combat major high-rise fires that 1) overtake a large portion of a floor in an office, 2) are driven by wind in a sub-divided, multi-dwelling high-rise and 3) extend rapidly to the floors above.

Before You Do Anything …
You must start out with a can-do attitude. This requires you to genuinely care about being a firefighter, and when you show up to work, you must be present at work 100%.

As you continue to learn as a student of the fire service, you must also develop methods to allow yourself to think outside the box, and have alternative plans and tools to combat a fire that’s out of the ordinary. Just as our brothers in the FDNY saved thousands of people on 9/11, you too need to be prepared to start operations with the mindset that you may need to save hundreds or even thousands of people in a high-rise building during a major fire.

Have a Plan B
Chances are that if you’re combating a major high-rise fire that’s wind-driven and involves a large portion of a floor or several floors, your standard attack line from the standpipe riser will have little effect on the flames. Your problems with adequate water delivery will be compounded if:

To respond to these water-delivery challenges, you must have a plan B in place and ready to go. This means you must have the proper tools, training and foresight to anticipate your needs in these types of situations.

Specifically, if one or two fire lines operating from a standpipe riser aren’t delivering enough gpm to control or extinguish the fire, OR you can’t advance into the fire floor due to the large volume of fire, what are your alternatives? There are a few things you can do:

Chances are that if you’re combating a major high-rise fire that’s wind-driven and involves a large portion of a floor or several floors, your standard attack line from the standpipe riser will have little effect on the flames. However, several alternatives are available to you, such as attacking the fire from the outside and using master stream devices. Photo Bill Tompkins

Practice & Train
As with most departments, we train frequently on the more common emergencies and hazards, and therefore are usually well prepared for these situations. If your department has the potential to respond to a major fire in a high-rise building, you must receive proper and continual training on this type of incident. Most buildings will allow you to practice within them, as it also benefits them for you to have a plan B in the event of a major fire in their building. Remember: To be fully prepared to implement other methods of attack, you must have already put them into operation during training.

Conclusion
As we prepare for future catastrophes to which the American fire service will respond, we must be prepared for the possibility of having to perform tasks that are out of the ordinary or extraordinary in order to save as many lives as possible.

If two or three floors in a 100 x 100 office building are burning, you won’t have the luxury of not reacting or of using standard methods of attack; you’ll have to determine—as fast as possible—how to deliver enough water to try and stop the vertical fire spread. Work with plan A, and stick with it when it’s working, but never stop preparing plan B.

Remember: The best way to “think outside the box” is to never allow yourself to be put in the box in the first place.
Our hearts go out to the families, friends and co-workers that lost so much on 9/11. Never forget.

High-rise fires are far from the “routine” responses we make on a regular basis and should always be treated as such.
