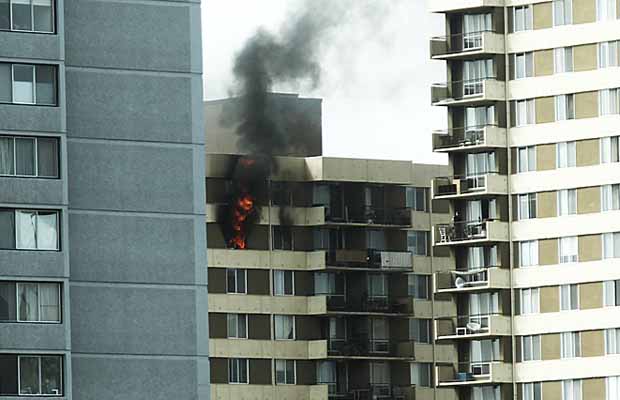 Flames and smoke could be seen coming from a unit on the north side of the building, and shards of glass lay on the ground.

All residents above the 16th floor of the 19-storey building were evacuated. There were no reported injuries, Wilson said, and the fire was contained to the 18th-floor suite. The bedroom where the fire started was gutted, and there was extensive smoke damage to the rest of the suite.

The units above and below the fire also sustained moderate damage.

“Today’s fire is another sobering reminder to use an ashtray if you smoke,” Russell Croome, deputy chief of public safety said in a release. “These kinds of fires are preventable, even if all you use is a metal can with some sand or water in it.”

Yvon Marier was lying down in his condo unit when he heard a loud noise from the suite next door, which he identified as unit 1805.

“I heard a strange noise like water dropping,” Marier said. “I went to the window, looked out and saw smoke.”

Marier grabbed his wallet and two chihuahuas, Migo and Poutine, and headed for the door. By the time he left, the smoke was so thick he could only see a few inches in front of his face.

The highrise was built in the 1970s, and the suite with the fire was rented by a young couple, he said.