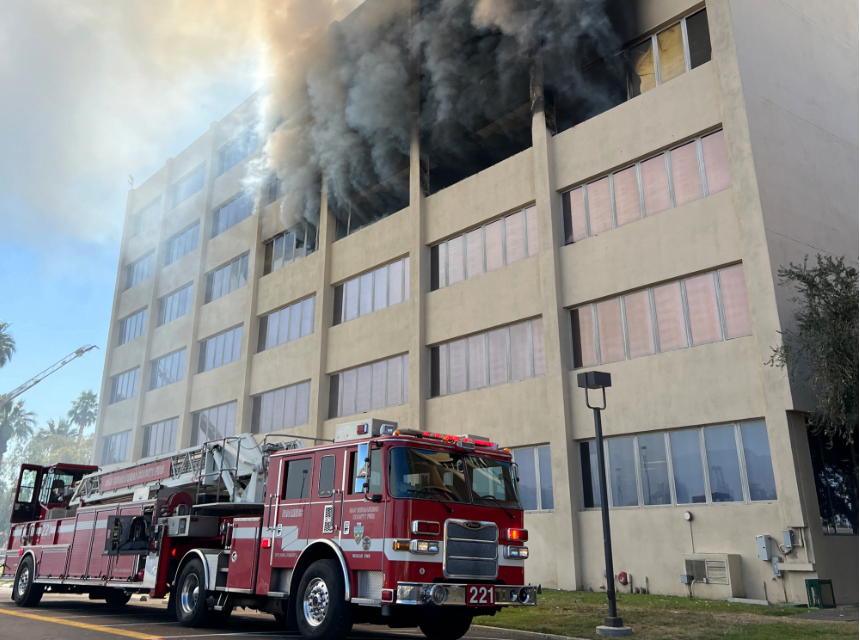 Firefighters were summoned by an alarm triggered at 172 W. 3rd Street at about 9:30 a.m., San Bernardino County Fire Battalion Chief Dan Wooters told a videographer with OnScene TV. The first crew to arrive saw smoke billowing out the high-rise and summoned backup.

More than 100 firefighters from the San Bernardino department, as well as the Colton, Chino, Highland, Redlands and Rialto fire departments battled the blaze, Wooters said.

Firefighters making their way into the building “found heavy smoke, fire and high heat conditions” as soon as they made it to the fourth floor, fire officials said in a statement. But they were able to hook up their hoses to the building’s internal firefighter pipe system and douse the blaze.

By just before 11:30 a.m., officials said the fire was out, but the damage was “extensive.” The building was deemed uninhabitable.

No one was injured: Firefighters searched the smoke-filled building but found no one.

“County (agencies) will be working throughout the week to secure the items inside the building,” Wooters said.

Officials said the cause of the fire is under investigation.