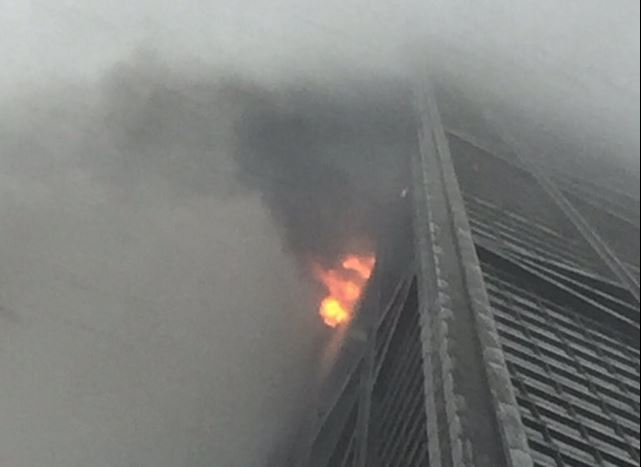 There’s no doubt that high-rise buildings are getting more complex.  Mega-buildings, pencil tall buildings, pre-fab high-rises, new wooden tall buildings and more are becoming familiar additions to many skylines, increasing the need for better command and building intelligence as well new technologies to help meet the challenges of defending these risks and protecting firefighters and occupants.

It’s vitally important for fire departments and their leadership to keep up with new technologies and integrate them into their jurisdictions.  There are five new technologies that are especially noteworthy for their immediate impact on high-rise firefighting.

In a fire, we know that smoke rises quickly to the ceiling, obscuring exit signs that are typically mounted above exit doors or high on walls. These exit signs are typically powered by electricity with battery backup, power sources that are known to fail in emergencies.

The solution is photo luminescent signs and egress path markings.  They are fail-safe and have a 20-year service life.  Made from strontium oxide aluminate pigment, these markings emit a green light that continues to glow in the dark after visible or invisible light sources have been removed.

These egress pathway markings are typically installed within a stairwell on each step (surface mounted), handrails and stairwell landings, allowing for safer, faster egress during an emergency.

Building energy storage systems (BESS) are large battery rooms that operate when the power company has an overload. Because they can give off toxic gases if ignited, a strict protocol for installation is imperative, and should be supported by a building intelligence tool that can trigger a HazMat advisory.

Besides posting building BESS warning signage to indicate the various specific hazards, it is important that the BESS hazardous data be provided to the fire department in a real time through a building intelligence tool. This tool supports operations through mitigation efforts and a capability for citywide tracking. It will indicate when it is necessary to issue a HazMat Unit advisory to incoming fire units prior to arrival at the scene of a BESS incident.

FARS systems greatly improve a department’s ability to quickly, safely and effectively deliver air to fire crews in complex structures.  This is a building-installed system, basically a standpipe for air that eliminates the need for highly trained firefighters to manually transport multiple air cylinders from the ground to the fire operations floor.

There are many examples of the challenges of air management in high-rise fires.

A continuous source of air is supplied to the FARS through secure, monitored air connection panels located on the exterior of the building. The fire department’s mobile air unit connects to the system via these panels and provides a constant supply of air.

There are two types of filling methods available in accordance with Appendix L of the 2015 International Fire Code and the preference of the authority having jurisdiction, based on its operational need, policies and procedures.

The emergency fill method features an interior fill panel that uses the RIC UAC fitting and allows firefighters to refill their air cylinders under full respiration even if they are in an IDLH environment. Firefighters simply attach a quick fill connection from the air panel to their SCBA. These interior air fill panels allow for at least two cylinders to be filled simultaneously.

With either method, firefighters can refill their air bottles at stations located throughout a building. They are never more than a few floors away from an air supply.

FARS is in the 2015 International Fire Code under Appendix L.

NIST studies have shown that 12% of a high-rise building can be evacuated via Occupant Evacuation Elevators (OEO) in 5 minutes. They can be used for egress from five affected floors to the lobby level for evacuation, and manually initiated from the fire command center when the fire alarm system is activated.

If a fire occurs on the 20th floor, that floor is the first priority.  The OEO elevator(s) will also service the two floors above and the two floors below, covering floors 18-22.

Real time signage should be available on all floors to inform people of the status of the elevator.  For example:

It is important to note that OEO elevators should be dedicated to the transportation and evacuation of occupants and must remain in readiness mode on the lowest floor within the block of floors affected.  This means they are not to be used to transport equipment, replacement SCBAs, fire crews, etc.  The OEO elevator is not an equivalent to a FARS for air delivery, nor is it designed to move fire crews and equipment up into a building.

There is an old saying that hindsight is 20/20.  Building intelligence gives first responders and the incident commander 20/20 foresight as they approach a fire or other non-fire emergencies in a complex structure, allowing better decision-making as an incident is unfolding and ultimately, better outcomes.

Because it is web-enabled, eBIC puts all building data at the fingertips of the incident commander.  This includes a complete overview of:

Buildings are getting more complex.  But technology is allowing us to keep pace with the challenges these new structures present.  The responsibility to educate ourselves and take full advantage of the newest tools available rests with us.  If we don’t keep up, we risk endangering our crews and the building occupants that we are responsible to protect.

Be safe out there,

Jack J. Murphy is a 35 year veteran of the fire service and the principal official of JJM & Associates, LLC. He is the retired fire marshal and former deputy chief of the Leonia Fire Department. He was a certified State of New Jersey Fire Official/Fire Inspector and a State Deputy Fire Coordinator assigned to the Bergen County Region. He has been involved with building /fire codes for more than 25 years and serving on 2 code cycles for the 2008/2012 editions of the New York City Model ICC Building and Fire Codes. Currently he serves as Chairman of the Fire Safety Directors Association (New York City), and a member of the National Fire Protection Association committees for High-Rise Building Safety and Pre-Incident Planning. He also is a PennWell Fire Group executive board member, a contributing editor with Fire Engineering magazine and the FDIC liaison officer to Bobby Halton.  He has been a fire service instructor for more than 25 years. In 2012, Murphy was honored with the Fire Engineering “Tom Brennan” Lifetime Achievement Award.  This paper is a summary of a presentation Murphy delivered at the High Rise & Heavy Rescue Operations Conference 2015 in Pensacola, FL.

New technologies that are noteworthy for their impact on high-rise firefighting.
