Get Them Out Safely
 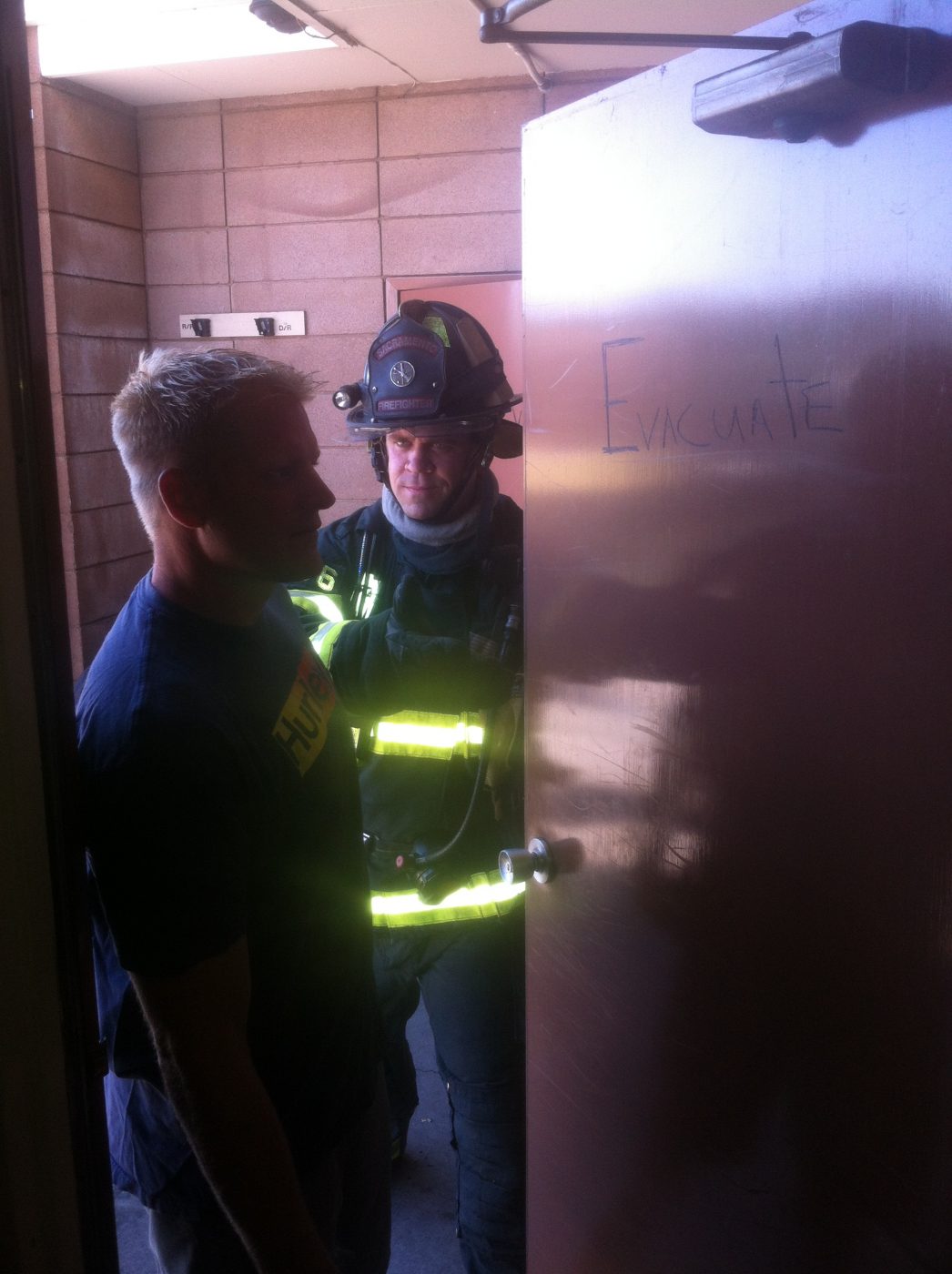 In addition to locating and sizing up the fire, the engine company must designate a stairwell for fire attack. Photo courtesy Pat Costamagna

Due to the size and complexity of high-rise buildings, evacuation is time and personnel intensive. High-rises, both commercial and residential, are densely populated and pose significant evacuation challenges. As a whole this a very daunting task, but a systematic breakdown of strategic goals and geographic sections will make the task more manageable for first-alarm companies. As with all incidents, efficient operations hinge on a thorough size-up and proper deployment of engine and truck companies.


The engine company assigned to fire attack must perform a systematic size-up of the fire floor. The size-up should include the number of floors affected and amount of fire involvement, as well as recognition of those affected by smoke and heat. The engine company’s size-up will determine evacuation needs on the fire floor and on the floors above the fire.

In addition to locating and sizing up the fire, the engine company must designate separate stairwells for fire attack and evacuation. They should also direct any occupants they encounter to the appropriately designated stairwell. This will ensure unimpeded access for crews tasked with fire attack.

The truck company’s primary responsibility is a systematic search for, and rescue of, occupants on the fire floor, floors directly above the fire and those that are directly affected by fire and products of combustion. This will likely require the use of all truck companies on the initial alarm.

Another stairwell should be designated for evacuation. Direct any occupants you encounter to the appropriately designated stairwell. This will ensure unimpeded access for crews tasked with fire attack. Photo courtesy Pat Costamagna

Officers can eliminate the need to initially evacuate the entire building by imposing a shelter-in-place strategy from the ground floor up to three floors below the fire floor. This will allow for command and staging officers to secure areas for equipment and personnel deployment in preparation for an extended event; it also decreases the likelihood of evacuees congesting and obstructing operation functions.

The top floors of the building must also be assessed for smoke conditions. This task should be assigned to the Rapid Ascent Team (RAT). The RAT team should ascend the fire attack stairwell and direct encountered occupants to a safe egress via the evacuation stairwell. Progressing upward, the team should give updates of smoke conditions on the upper floors. While moving across the top floors toward the evacuation stairwell, they should assess elevator lobbies and other likely areas where victims may be seeking refuge.

During initial stages of the incident, it’s easy to be drawn to citizens needing attention. However, due to personnel constraints and the overwhelming number of tasks needing completion, it becomes prudent to empower capable occupants to assist elderly/special needs occupants to the correct exit stairwell.

A single occupant requiring assistance in evacuation from upper stories of a high-rise will tie up an entire company for an extended amount of time. The utilization of capable citizens to perform the same task will allow fire companies to complete assigned tasks and provide for positive operational outcomes. If an occupant is unable to evacuate to ground level, position them below the floors used for fire operations and shelter them in place. If needed, identify a large area as a place of safe refuge to shelter multiple occupants.

The building has now been effectively broken down into three manageable sections: the area below the fire operation, the fire floor and floors immediately affected by the fire and products of combustion; and the uppermost floors of the building that have been exposed to rising smoke and its effects related to mushrooming. By breaking the building down into these sections, it becomes less complicated for the companies on the initial alarm to manage an evacuation.

Pat Costamagna is a 13-year veteran of the Sacramento Fire Department currently assigned as Captain of Engine 56 B.

Due to the size and complexity of high-rise buildings, evacuation is time and personnel intensive. High-rises, both commercial and residential, are densely populated and pose significant evacuation challenges.
