Go with the Flow
 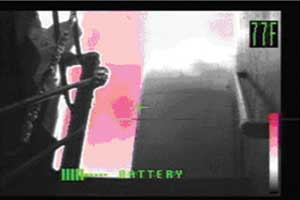 During the heat-release experiment, researchers determined that when a window was left open in the fire room, flame length out the window was smaller during natural ventilation (shown) than when using PPV fans to ventilate the room. Photo Courtesy NIST

The Building and Fire Research Laboratory at the National Institute of Standards and Technology (NIST) created a Fire Fighting Technology Group (FFTG) to research the needs of the fire service. One key objective of the group: to provide information that improves firefighter safety.

The FFTG recently completed a 7-year study on positive-pressure ventilation (PPV). This article provides some of the practical results from the seven reports documenting the study.

PPV 101
PPV allows fire crews to perform tasks in a more tenable environment on the fireground. PPV fans are commonly powered with an electric or gasoline engine and usually range in diameter from 12 to 36 inches; however, manufacturers now offer fans up to 84 inches in diameter that can be mounted on trucks and trailers.

On scene, firefighters place PPV fans about 4 to 10 feet outside the doorway of a structure so that the “cone of air” produced by the fan extends beyond the boundaries of the opening. With the doorway inside the cone of air, smoke, heat and other combustion products are pushed out of the structure via other openings, such as a hole in the roof or an open window. In turn, this allows ambient air to move into the structure.

PPV can also increase the pressure in part of a structure by not providing a vent location. This increase in pressure, if adequate, will prevent smoke from flowing to a “protected” area. This is most useful in larger structures, such as schools, hospitals, malls and high-rise buildings.

Heat Release
As part of its study, the FFTG conducted several experiments, two of which examined the effect PPV fans had on a fire room. In the first experiment, an 18″ electric fan was used to ventilate a room after a window was opened. In the second experiment, the fire room was naturally ventilated.

In the first experiment, the fan was positioned 8 feet from the open doorway to create a cone of air around the doorway. Note: This is when firefighters typically advance to extinguish the fire.

The results: The peak heat release rate for both experiments occurred at about the same time, but the peak rate in the first experiment was 2 MW higher. The PPV fan also caused a 60 percent increase in the burning rate during initial attack and forced the flames at least 6 feet outside the room; the second experiment pushed them only 3 feet out. It also lowered the room temperature and improved visibility leading up to and into the room.

Had this been a working structure fire, crews would’ve been able to attack the PPV-ventilated fire more easily than the naturally ventilated fire. The window was ventilated and the fan was turned on 5 seconds later. After that, it took 60–90 seconds for the fire to reach its peak burning rate.

After the flow of gases was forced away from the entrance, the fire burned steadily until the fuel was consumed. This indicates that for the conditions in this experiment, firefighters should wait at least 60 seconds after ventilation and fan start before advancing toward the fire. This allows the air flow to stabilize, the fire’s burning rate to stabilize, temperatures to decrease and visibility to improve. Important: This is not true for all structures or fires. You must always ensure that the changes you anticipate from using the PPV fan are occurring prior to beginning an interior attack.

In the thermal image, hot gases are entering the stairwell through the open doorway. Photo Courtesy NIST

Chicago High-Rise Tests
The Chicago Fire Department obtained permission to conduct tests in a 16-story high-rise slated for demolition. Working with experienced chiefs and firefighters from Chicago, New York, Toledo and Ottawa, the FFTG conducted a series of experiments to determine if PPV fans could be successfully implemented into a high-rise fire attack.

The building featured two stairwells: the “attack” stairwell and the “protected” stairwell for building occupant evacuation. The door between the fire apartment and the public corridor was kept open.

The results: The portable fans effectively ventilated the 16-story protected stairwell and kept it free of smoke. In most cases, a single, portable fan at the base of the stairwell improved conditions in the stairwell; however, when a second fan was added two floors below the fire floor, smoke was kept completely out of the stairwell. To protect both stairwells, four PPV fans were used.

These experiments demonstrate that PPV fans can adequately pressurize stairwells to stop smoke flow from the fire floor into the stairwell. This provides a safer environment for firefighters to advance onto the fire floor and for occupants to egress.

To maximize the capability of PPV fans in stairwells, follow these guidelines:

Note: The experiments also documented that PPV fans can be loud (> 100 dB), which may affect fireground and command post communications.

After the PPV fan was started, hot gases stop entering the stairwell, as shown in the image. Photo Courtesy NIST

The National Institute of Occupational Safety and Health’s (NIOSH) recommended exposure limit for CO is 35 ppm (0.0035 percent) as an 8-hour time-weighted average (TWA) and 200 ppm (0.02 percent) as a ceiling exposure. A reading of 1,200 ppm (0.12 percent) is considered immediately dangerous to life and health (IDLH).

The internal combustion of a gasoline fan engine also produces CO, and although the levels are much lower than those achieved by a fire, the FFTG conducted experiments to analyze CO levels in the Chicago high-rise apartment. CO meters were placed in both stairwells to monitor the fans’ impact on CO levels.

The results: Without the fans, CO levels in the public hallway and the south stairwell almost always reached or exceeded the 800-ppm (0.08 percent) limit of the meters used. In most cases, the fans decreased CO levels from IDLH conditions to less than 200 ppm (0.02 percent).

Wind-Driven Events
The FFTG conducted eight experiments to examine the impact of wind on fire spread through a multi-room structure. Each experiment was designed to expose a public corridor area to a wind-driven, post-flashover apartment fire. As in the experiments in Chicago, the door from the apartment to the corridor was kept open, and the fires were ignited in the bedroom of the apartment.

The results: The peak heat release rates from the post-flashover structure fire were typically between 15 MW and 20 MW. Because the door from the apartment to the corridor was open, temperatures in the corridor area, 5 feet below the ceiling, exceeded 1,112 degrees F for each of the experiments. The heat fluxes, which were measured in the same location during the same experiments, exceeded 70 kW/m². These conditions were reached within 30 seconds of the window failure. The lesson: Wind is a critical part of size-up and must always be considered when using PPV.

Note: Even though these experiments examined large structures, wind can also have a significant impact on smaller structures, such as single-family homes.

Conclusion
The FFTG experiments have shown that PPV has the ability to remove or limit occupant exposure to fire gases so safe egress can be accomplished. Many fire departments don’t have staffing levels that allow them to effect multiple rescues in a highly populated structure. These tactics may provide fire departments with the ability to remove the hazard from the occupants as opposed to removing the occupants from the hazard, which is much more time-consuming and labor-intensive.

To download copies of the referenced reports or view videos from the experiments, visit www.fire.gov.

The Building and Fire Research Laboratory at the National Institute of Standards and Technology (NIST) created a Fire Fighting Technology Group (FFTG) to research the needs of the fire service. One key objective of the group: to provide information that improves firefighter safety. The FFTG recently completed a 7-year study on positive-pressure ventilation (PPV). This […]
