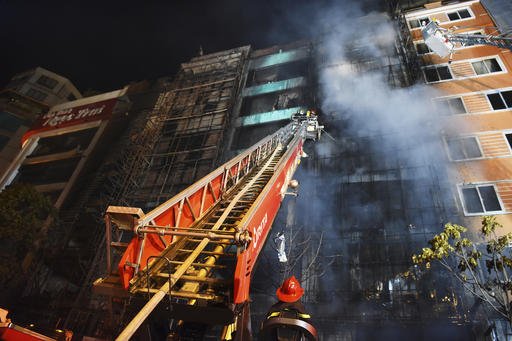 Fire in a large karaoke parlor spread to several buildings

In this photo taken on Tuesday, Nov. 1, 2016, firefighters extinguish a fire at a karaoke venue in Hanoi, Vietnam. The fire broke out on the eight-story building and quickly spread to several nearby buildings, killing 13 people. (AP Photo/Stringer)

The fire broke out at the eight-story karaoke parlor in Hanoi and quickly spread to several nearby buildings housing restaurants and other karaoke parlors, they said. It took firefighters about five hours to put out the blaze.

Online newspaper VnExpress quoted Maj. Gen. Doan Viet Manh of the fire department as saying that 13 bodies were recovered from the scene.

State-controlled media quoted a guard at the karaoke parlor as saying the fire started at its sign board, and staff tried to put it out but failed.

Government officials were not available for comment late Tuesday.

In a statement on a government website, Premier Nguyen Xuan Phuc asked local authorities to search for victims and ordered police to carry out a prompt investigation and punish anyone who violated the law.

In this Tuesday, Nov. 1, 2016 photo, firefighters try to extinguish a fire at a karaoke parlor in Hanoi, Vietnam. The fire broke out at the eight-story karaoke parlor and quickly spread to several nearby buildings. (AP Photo)

Fire in a large karaoke parlor killed 13 people and spread to nearby buildings.
