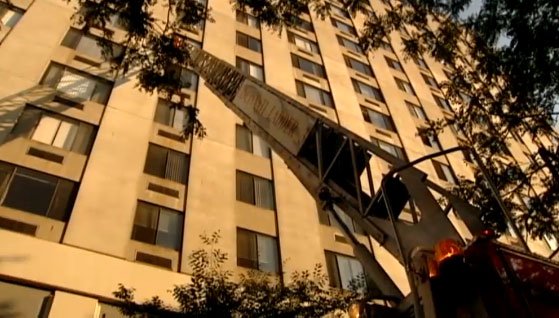 CINCINNATI — For the second time in as many days, Cincinnati firefighters found that their ladders weren’t tall enough to reach fires in tall buildings.

Fire crews said they were called to high-rise fires on Sunday and Monday.

Officials said their ladder trucks can only reach the sixth or seventh floor of a building.

In one instance, the city had to deplete half of its fire resources to fight a fire at the Garfield Tower Apartments on Monday.

On Sunday, crews dealt with a grease fire at the Carew Tower that pushed smoke through more than a dozen floors, forcing evacuations.

The city said it does have special equipment for high-rise situations. One such item is a hose that is lighter and more flexible for carrying up a ladder or stairwell.

“Our ladders can only reach, depending on how close we can get to them, the most is usually the seventh floor, so anything above that, our ladder trucks cannot reach them,” District Chief Greg Potter said.

From there on up, crews said they rely on a standpipe valve. It runs up stairwells and taps into the buildings’ pipes.

Once crews reach the upper floors, they also depend on people closing doors behind them as they evacuate. It’s something that didn’t happen in the Garfield Place fire.

“Don’t prop doors open. Doors — when the alarm system goes off — close for a reason, that’s to compartmentalize the fire,” Potter said.

Potter said the most crucial part of firefighter equipment for tower fires is the firefighters themselves, something he said the city could use more of.

“The big thing is manpower. Just getting enough people there quick enough to do the entire task you need to do, because if it is a fire on upper floors, the first guys taking up all that equipment, they might be too tired to fight the fire,” Potter said.

Potter stressed that the most important thing for people to remember when confronted with a high-rise fire is to know not one but two exit routes.

For the second time in as many days, Cincinnati firefighters found that their ladders weren't tall enough to reach fires in tall buildings.
