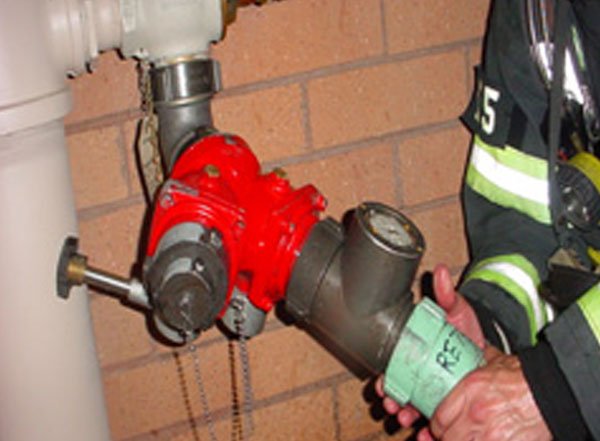 High-rise operations are among the most taxing for any fire department. We cannot simply apply our residential standard operating guidelines (SOGs) and expect to be successful. High-rise fires demand a very specific set of strategies and tactics. At the heart of these tactics is fire attack. Putting a single 2½” hoseline in place off of a standpipe many floors above the street will push any department to the brink. This article will cover one way of getting such a task accomplished safely and efficiently.

Assignments & Equipment
In the city of Sacramento, a high-rise first-alarm assignment will get five engines, three trucks, two chiefs and two medics. The first engine company to arrive is responsible for Lobby/Systems/Command. This is done because the first-arriving engine should be the most familiar with the building alarm system and layout, and can therefore provide valuable information and direction to the fire attack crews.

The next three engine companies will bring up identical complements of equipment:

The company officer of the second-due engine chooses the fire attack stairwell and relays it to command. This determination is based on standpipe availability and proximity to the reported location of the fire. This officer is in charge of the initial fire attack.

Hose Setup
Once the crews arrive at the floor below the fire—either via elevators or climbing the stairs—the initial hoseline is stretched while the officer gets a quick view of the floor plan, as it may be a copy of the fire floor.

The setup of the hose is one of the most important aspects in getting an effective hose stream. It’s imperative that kinks get eliminated prior to advancing the hose. Charging 150 feet of 2½” hose in a cramped stairwell tends to produce kinks as the hose slides down the stairs. Using the floor below is a better option for setting up the hose because it requires fewer tight bends.

The nozzle firefighter sets up the hose while the backup firefighter gets the standpipe ready to receive the hose. The officer checks conditions on the fire floor.

The hose work begins on the floor below the fire in the following sequence of events:

Photo 3: Laying out the hose on the floor below.

Charging & Advancing the Line
As soon as the hoseline is attached, the officer calls for water. The nozzle firefighter should flow the nozzle fully opened so that the back-up firefighter can set the correct residual pressure. They will use the wye valve and not the standpipe valve to adjust the pressure and then lock the wye valve in place to avoid accidental opening or closing. A rule of thumb: The gauge should read 70 psi for two lengths of hose, 75 psi for three and 80–85 psi for four (see Photo 4).

The hoseline is now ready for advancement. The third-due engine should by now have staged their hose and appliances two floors below and be ready to help, on the floor below the fire, as support to the attack line. The officer of the attack line must decide whether to leave their back-up firefighter at the standpipe connection or use the back-up firefighter from the third-arriving engine.

Either way, the firefighter in charge of the connection must understand how important they are to the entire operation and must guard against any unauthorized shutting down of the standpipe. They must also be attentive to the radio for any requests from the fire attack team. They can help move hose up the stairs as long as they don’t stray too far from the standpipe.

Once they reach the point where the nozzle is to be opened, the team places the hose on the ground so that the friction now works to reduce some of the nozzle reaction. Use good nozzle mechanics, with the nozzle out in front of the nozzle firefighter, to make the 2½” hose as effective as possible. The fire attack officer coordinates hose movement on the fire floor, while the third-due officer manages hose movement in the stairwell.

If additional hoselines are needed for fire attack or a two-out line, the standpipe outlet two floors below should be the first option considered. If possible, avoid connecting the second hoseline to the wye already in use. Although hooking up two floors below requires more hose, it keeps the stairwell clear of extra hose that may impede the progress of the primary attack line. Leave the open side of the wye available for extending the primary attack line from the wye if more hose is needed. This is easier than trying to extend the hoseline from the nozzle in low-visibility conditions on the fire floor.

Smooth Sailing
High-rise fires require the highest level of firefighting expertise and discipline, and the attack line is the most critical piece of a safe and effective operation. Coordinated efforts among the fire attack team, as well as subsequent arriving engines, will help the hose work portion of the fire run smoothly. Now we just have to hope the truck guys know what they’re doing!

High-rise fires are extremely taxing on fire attack crews. Having a plan for the efficient advancement and charging of the primary fire-attack line can significantly enhance the effectiveness of these operations.
