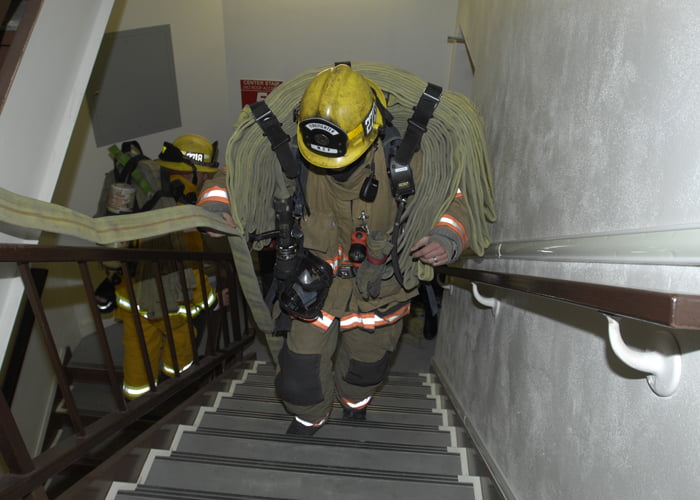 High-rise firefighting is extremely resource-intensive. Proper staging of equipment on a floor below the fire floor can greatly improve the efficiency of the fire attack. In this drill, firefighters ensured an ample supply of equipment was staged in short order. Photo Bob Graham

Much of San Diego’s sprawling North County has one thing in common: a distinct lack of multi-story commercial buildings. Population growth is spurring change throughout the region, including new multi-story structures on the massive Camp Pendleton Marine base, which, for many years, was home to only one multi-story building, the Naval Hospital Camp Pendleton.

To promote high-rise structure firefighter training, base officials made the base hospital available for a high-rise drill on a recent Saturday morning, when patient loads were small at the hospital. Firefighters from Camp Pendleton and surrounding communities converged on the hospital to practice inter-departmental cooperation, refine skills and learn how to deal with a fire situation many had not encountered: a fire on the top floor of a high-rise.

The first in unit, Camp Pendleton engine 2714, began by checking the control panel on the Quarter Deck (ground floor) and began the climb to the fire floor to commence fire attack. Additional firefighters and apparatus from Camp Pendleton, CAL FIRE, Encinitas, Pala, Rancho Santa Fe, Solona Beach and Rincon fire departments began arriving and bringing gear to the third-floor staging area, then climbing to the fire floor on the sixth.

The “fire” scenario depicted a well-involved room at the far end of the sixth floor, with the additional complication of a ruptured oxygen valve. With time limited because of the hospital’s operational commitments, the three-alarm exercise was completed successfully and within time constraints.

With any drill, the success lies in what is learned; in this case, participants gained a wealth of knowledge regarding the right and wrong ways to deal with a high-rise incident. Crews were commended for their “gung ho” attitude, following proper firefighting procedures and turning the staging floor into a readily available source of gear for those on the fire floor above. Fire commanders deemed the drill a major success.

Bob Graham is a writer and photojournalist based in San Diego. He has worked in fire journalism for many years; one of his technical writing projects well known to firefighters over the past few years was the Holmatro Guide to Vehicle Extrication. Graham’s background includes a stint in the automotive industry, where he was one of the first Toyota Master Technicians in the U.S.; a degree in Business Administration; and photography projects in aviation, railroading and endangered species.