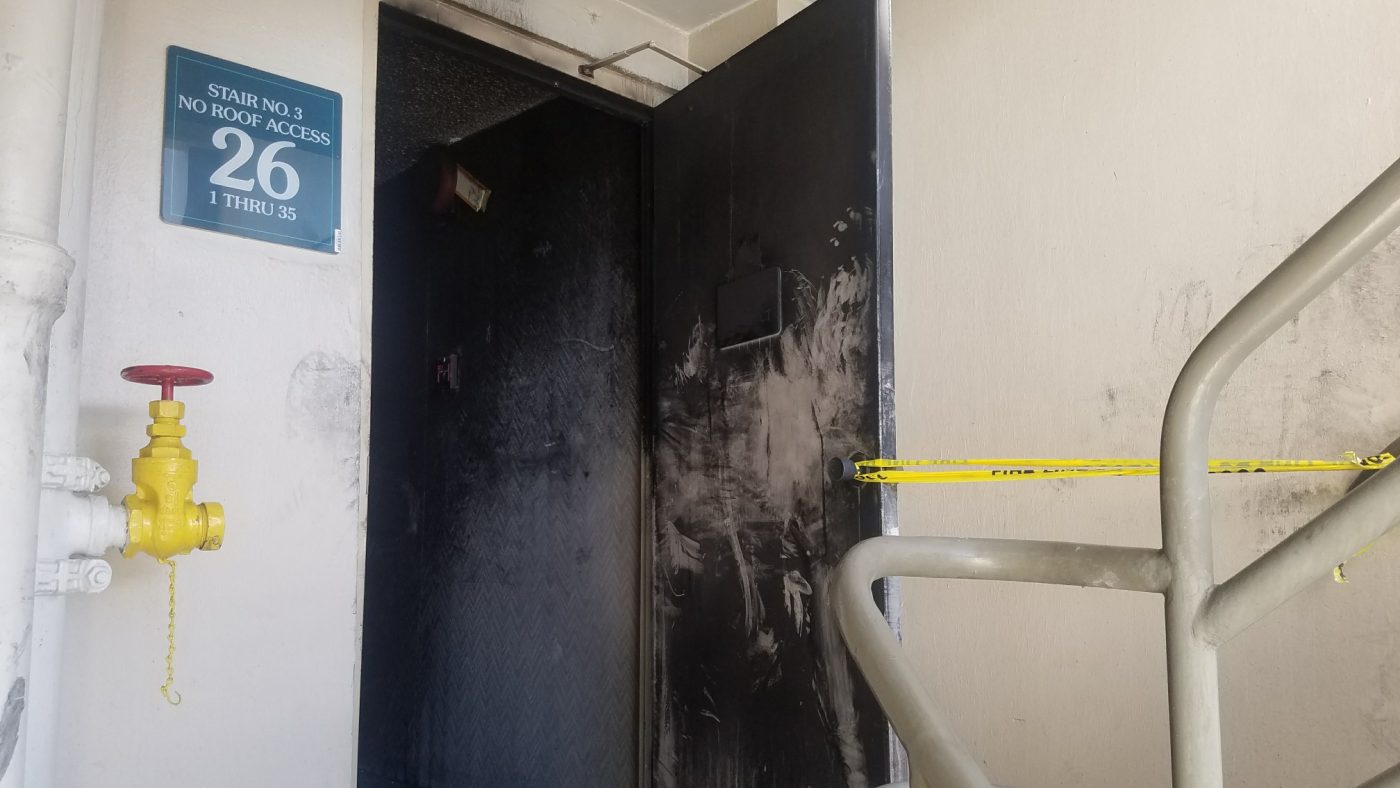 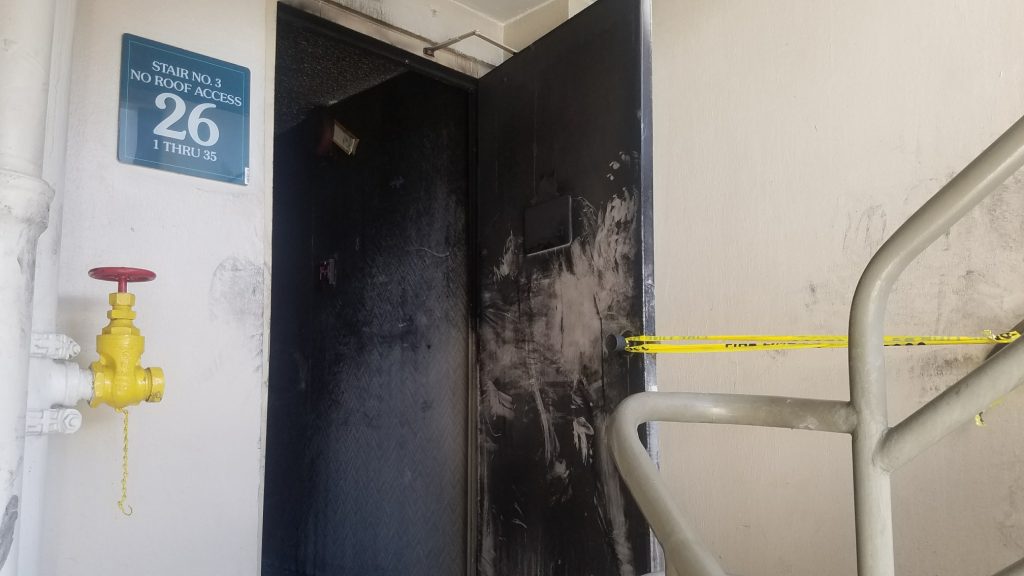 In this photo provided by KITV, fire damage from a blaze that killed three people and left 12 injured in the Marco Polo building in Honolulu is shown on Saturday, July 15, 2017. The fire broke out Friday afternoon in a unit on the 26th floor, where all three of the dead were found, Fire Chief Manuel Neves said. The building is not required to have fire sprinklers, which would have confined the blaze to the unit where it started, Neves said. The 36-floor building near the tourist mecca of Waikiki was built in 1971, before sprinklers were mandatory in high-rises. (Brenton Awa/KITV via AP)

HONOLULU (AP) — Hundreds of older high-rise apartment buildings in Honolulu aren’t required to have sprinkler systems, but city officials are pushing for change in the wake of last week’s deadly 26th-floor blaze.

Honolulu Mayor Kirk Caldwell introduced a bill Monday that would require sprinklers in all high-rise buildings regardless of when they were constructed.

There are about 300 high-rises on Oahu that were built before a 1975 law made sprinkler systems mandatory in new structures, according to a survey conducted by the Honolulu Fire Department. The Marco Polo building that caught fire Friday was built in 1971.

“We know the Marco Polo fire would likely not have spread if the building had sprinklers,” Caldwell said in a statement. “We also know that many Oahu families struggle to pay for affordable housing, and we are working with the City Council to find ways to help homeowners pay for this lifesaving upgrade.”

Caldwell’s bill would require all buildings taller than 75 feet to install sprinkler systems.

All high-rise hotels in Honolulu were required to install fire sprinkler systems in 1983, and the requirement was extended to commercial high-rise buildings in 2001. But efforts to require the systems on high-rise residential buildings on the city and state level have failed in the past because of cost concerns.

“At the end of the day, this really is about protecting the very young and very old, those who really may not be able to escape a fire quickly enough,” Caldwell said.

Fire investigators said Monday the apartment where a deadly fire began in a Honolulu high-rise was near the two units on the 26th floor where the bodies of three victims were found, but they’re still working to determine the cause.

The origin of the fire is unit 2602, Honolulu Fire Department Capt. David Jenkins said. Two women and a man died in two different apartments on the same floor of the 36-story high-rise.

Investigators will determine exactly where in the unit Friday’s fire started and what caused it, Jenkins said.

The Marco Polo building was constructed in 1971, before fire sprinklers were required in high-rises. Fire officials say sprinklers would have prevented flames from spreading.

It’s one of the worst fires in modern Honolulu history, Jenkins said.

A sprinkler system would have confined the blaze to the unit where it started, Honolulu Fire Chief Manuel Neves said.

Douglas Hesley, branch president of Associa Hawaii, the management group that runs the Marco Polo building, declined to comment on past fire drills or safety plans that were in place at the time of the fire.

When asked if an Associated Press reporter could enter the building Saturday afternoon to see the fire damage, Hesley declined and said he was uncertain of the structural integrity of the fire-damaged floors. He said the area was under the control of city police and fire officials. However, the fire department said Monday the scene was released to the building around 1 a.m. Saturday. The police department said it does not consider the burnt floors a crime scene.

Residents were being allowed back in to the high-rise, and at least one ventured into the fire-damaged area without being stopped. A KITV reporter also entered the burned section of the building Saturday morning. One photo from KITV shows an entrance door to the 26th floor being held open with yellow caution tape, but nothing preventing people from entering.

Calls Monday to Hesley were not returned.

The Honolulu Fire Department said fire inspection reports are part of their investigation and cannot be immediately released.

In the U.S., between the 1970s and mid-1980s, there were mandates for sprinklers in new construction. But getting sprinklers retrofitted in existing buildings was a taller hurdle, said Robert Solomon, a fire protection engineer with the National Fire Protection Association.

“This fire will bring a window of opportunity for everybody to come together on that,” Solomon said.

Sprinklers in high-rise buildings became part of the building code in 1981, after deadly fires in Las Vegas, said Rob Neale, vice president for national fire service activities at the International Code Council. A number of communities adopted retroactive sprinkler requirements and developed timelines, typically allowing six to eight years for buildings to be retrofitted, he said.

Los Angeles, Houston, San Antonio, San Diego, Chicago and Philadelphia all require sprinklers in existing high-rises regardless of when the buildings were constructed, Neale said.

Legislation in wake of fatal high-rise fire calls for sprinklers in all buildings taller than 75 feet.
