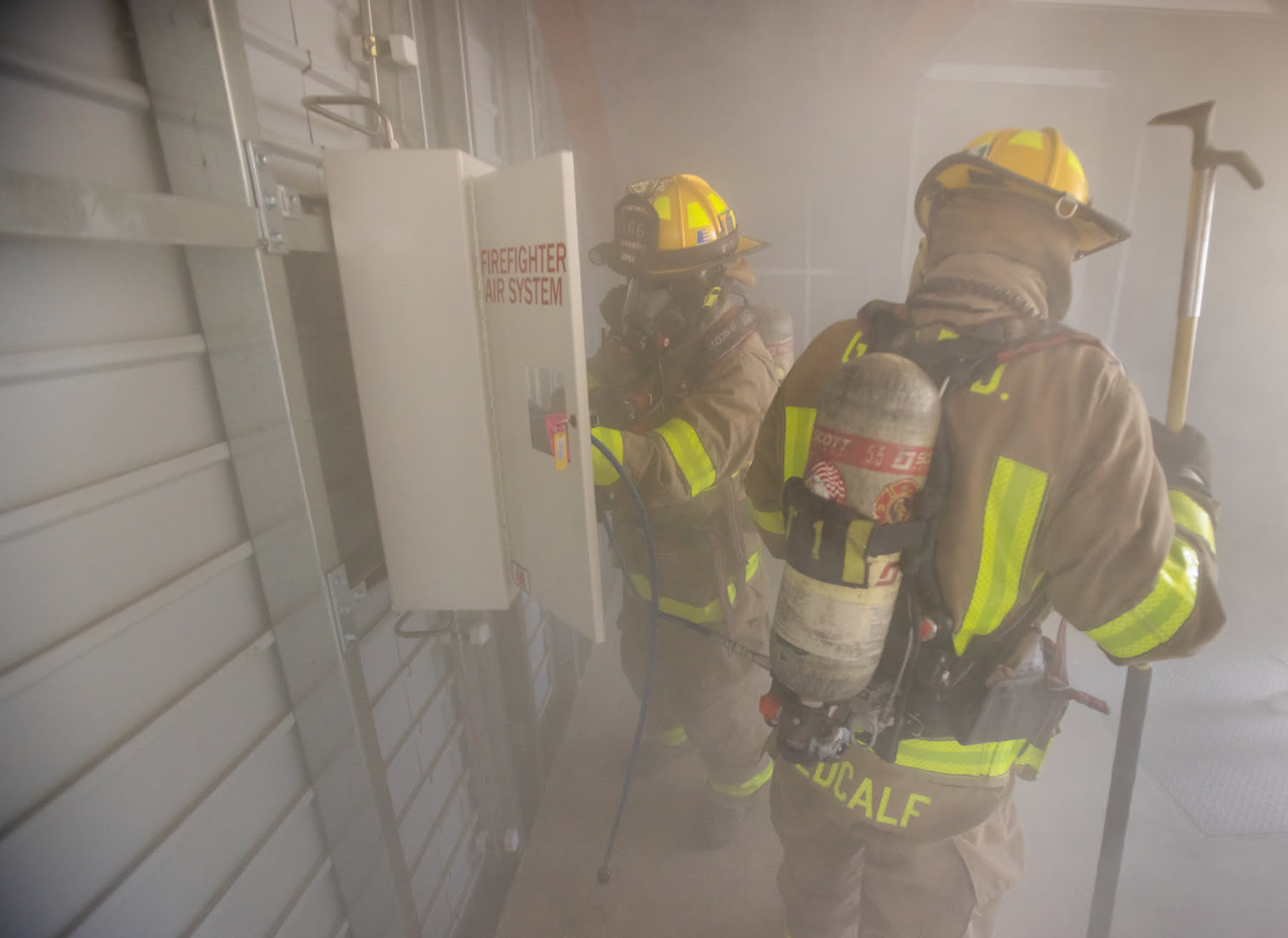 The line of duty death of a firefighter or the civilians they so fiercely work to protect is a terrible thing. It rocks the fire department and the community to their very core.

Many fireground deaths are due to a failure of air management. The simple fact is, running out of air in smoky, superheated environments is deadly. Air supply is limited, and there is little room for error.

After the bagpipes play and all the tears are shed, the finger-pointing begins. Why aren’t we doing more to enhance firefighter and civilian safety? Is our training flawed? Is our budget insufficient? What did the building owner do, or not do, that contributed to this horrible outcome? Who is responsible at City Hall? Camps form, and blame is leveled in heated and destructive ways.

The sadness, frustration, and anger are understandable. Those who perish in a fire are never coming back and those left behind must carry on with a huge hole in their lives.

Stories like this are common. But these are not the only stories being written.

Recent collaboration between the public and private sector to find a solution to the problem of running out of air has flipped the script. Now, leaders in public safety, city government, and industry are using innovative technology and new approaches to air management to ensure successful outcomes. Together, they’re writing new stories with happy endings.

This is one of those.

In 2016, the City of Plano became the first in the state of Texas to adopt Appendix L of the International Fire Code (IFC) and require firefighter air replenishment systems (FARS) in new high-rise construction.

FARS are a standpipe for air, permanently installed in a high-rise or other large structure. FARS deliver a safe, instant, endless supply of air replenishment to firefighters inside a structure. Firefighters can refill their air bottles in two minutes or less under full respiration, and return immediately to the firefight.

Then-Fire Chief Sam Greif was the principal advocate for the addition of FARS to Plano’s fire code. Plano, a suburb in the Dallas/Ft. Worth metroplex, was experiencing rapid growth in both population and new, large-scale construction. Its population had increased by nearly 10% over the past ten years to 285,000, ranking it the 9th largest city in Texas.

Greif, who is now the deputy city manager overseeing public safety for the City of Plano, saw FARS as essential for modern firefighting. “There are two must-haves when fighting high-rise or big box fires, water supply and air supply for the firefighters,” he said. “FARS will do for the air supply what standpipes did for water supply. It is a game changer for fire tactics. It allows the ‘best defense is a good offense’ attack to become a reality.”

After Plano’s adoption, numerous cities in the Dallas/Ft. Worth area researched FARS and followed suit, including McKinney, Frisco, and South Lake. What’s more, additional cities in the region indicated they were considering adding FARS in their next code adoption cycle. This got the attention of the North Central Texas Council of Governments (NCTCOG), a forward-looking organization focused on the 16 counties in north Texas surrounding Dallas and Ft. Worth and serving 200+ member cities and counties. NCTCOG believes code consistency is key to supporting quality development in the region. The code requirement for this new life safety system was something they wanted to review.

In July of 2021, after a thorough vetting process, the NCTCOG recommended that all of its 200+ member governments adopt Appendix L of the International Fire Code and mandate the installation of FARS in construction of new high-rise buildings, big box-style horizontal structures like warehouses and retail stores, and other large structures.

Based on that recommendation, numerous cities in the region are moving to adopt the 2021 IFC with Appendix L, the FARS requirement, in 2022. That will make the Dallas/Ft. Worth area one of the safest in the country for firefighters. And the region is leading the way for the rest of the state. By spring of 2022, more than 50 cities throughout Texas are expected to adopt the 2021 code with FARS included.

So how did that happen?

On the national level, the adoption of a fire code can take place at any time. The IFC and the NFPA codes are published on a three-year cycle. New code proposals and requests for code changes are vetted by committees made up of representatives from government and interested parties, such as industry and trade associations.

The national codes must be adopted by a local governing body before they become enforceable by law. The national codes are designed to allow local jurisdictions to add amendments or make changes to the published code based on factors specific to their community, including geography, topography, access, water availability, response capabilities, local hazards, and more.

The NCTCOG is a dedicated to simplifying the code adoption process for its member governments, while reducing the number of variations between local construction codes in their region. By encouraging cities to adopt standardized codes, NCTCOG has helped North Central Texas grow, simplifying the process for developers, contractors, and builders working from city-to-city throughout the region. This reduces development costs, which typically results in lower construction cost, benefiting all in the region. In the case of FARS, NCTCOG’s standards also improve public safety, ensuring seamless cooperation between fire departments and facilitating mutual aid.

As a quasi-government organization, NCTCOG has no enforcement authority. It can only make recommendations. Each jurisdiction can adopt the entire NCTCOG package of recommendations, or they can pick and choose the sections they feel are appropriate for the safety and welfare of their community.

However, the recommendations of the NCTCOG carry significant weight. The organization has played a key role in attracting industry and new residents to the region, and has earned a high level of credibility with local leaders and members of the business community.

Its process is rigorous.

Code review and evaluation starts with NCTCOG’s Regional Codes Coordinating Committee (RCCC). The committee is comprised by five advisory boards made up of local public- and private-sector code professionals.

NCTCOG’s code assessment and development process begins with each of the advisory boards reviewing the latest edition of the nationally published codes, and ends with the release of recommended uniform amendments for the North Central Texas region. Most recently, the committees completed their review of the 2021 International Code package and the 2020 National Electrical Code.

The meetings of all boards and committees are open to the public, and any interested party can submit a code change request, testify for or against a code change, or present information to the committee. The inclusion of FARS in the NCTCOG recommendation came at the request of fire chiefs from throughout the region. Some had already adopted the FARS code. Others stated their intention to do so. At the NCTCOG code hearings, they testified that the system is a must for the safety of firefighters and citizens. Their involvement in the code process had a major impact on NCTCOG’s decision to recommend the FARS code for regional adoption.

The NCTCOG is a reference standard for how the development community, government, and the fire service can come together in an open process to help a region grow responsibly and thrive, while ensuring the safety of firefighters and the citizens they protect.

Clearly, North Central Texas is writing a new story about firefighter safety and air management that is collaborative, inclusive, and forward-looking.

And that’s a story worth repeating.

David Kerr has more than 40 years of experience covering municipal and industrial fire protection.  He spent 35 years with the Plano (TX) Fire Department, 18 of those as the Fire Marshal. He currently serves as an adjunct faculty member at the National Fire Academy, Sam Houston State, and Texas A&M (TEEX’s). He is a technical committee member of NFPA’s National Fire Alarm Code, serving over 35 years, and actively involved in code development at the local, state, and national levels. David graduated from Oklahoma State, and received his master’s degree from Texas A&M University. He is a member of several national fire service organizations, and serves on the boards of the International Fire Marshal’s Association and the Executive Fire Officers under the IAFC. He also serves as an advisor to the United States Fire Administration prevention programs, and as chair of the Regional Code Correlating Committee for the North Central Texas Council of Governments.
Mike Gagliano has more than 33 years of fire/crash/rescue experience with the Seattle Fire Department and the United States Air Force. He retired as the captain of Ladder 5 and remains a proud member of Fire Station 31. Captain Gagliano is the author of numerous fire service articles, and co-authored the bestselling books Air Management for the Fire Service, Challenges of the Firefighter Marriage and the SCBA chapter of the Handbook for Firefighter 1 & 2 from Pennwell. He is a member of the Fire Engineering/FDIC Advisory Board, the Firefighter Air Coalition board of directors, serves on the advisory board of the UL-Firefighter Safety and Research Institute and teaches across the country on air management, fireground tactics, leadership, and company officer development.

NCTCOG For more information on NCTCOG go to https://www.nctcog.org/home. The NCTCOG offers training related to its amendment package and will assist with the code adoption process, especially in smaller jurisdictions. Carolyn Horner, senior environment and development planner for NCTCOG, is a valuable resource. She collects information regarding code adoptions and would like to be advised of any implementation of the NCTCOG recommendations. Contact her at nhorner@nctcog.org. To view the 2021 amendment package go to https://www.nctcog.org/envir/regional-building-codes. Select the Amendments tab and scroll to see the code and year you are looking for. The code package is available in PDF or Word format.