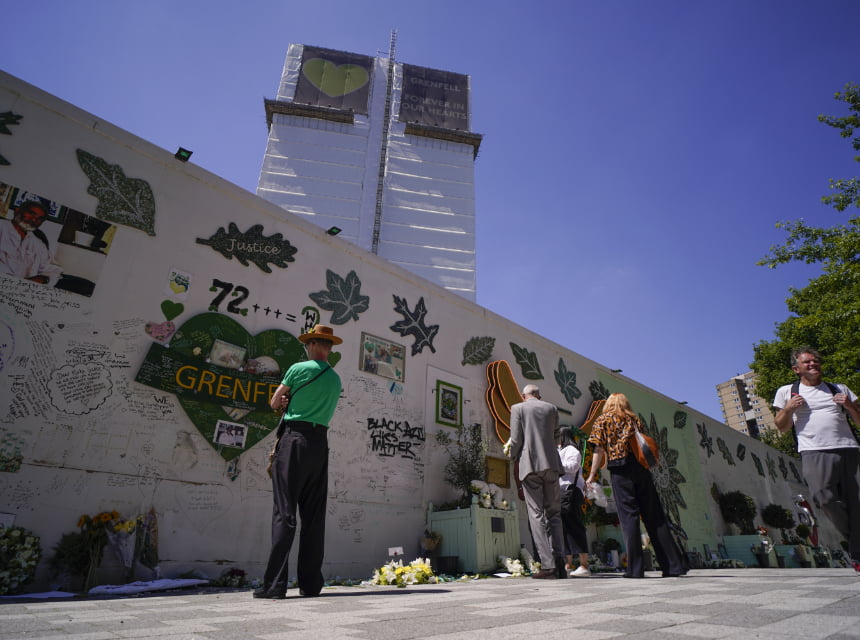 LONDON (AP) — The names of the 72 people who died in a London high-rise tower blaze were read out Tuesday at a memorial service to mark five years since the tragedy, the worst domestic fire on British soil since World War II.

Former Prime Minister Theresa May and London Mayor Sadiq Khan joined Grenfell Tower survivors and the bereaved at the Westminster Abbey service to remember those who died in the June 14, 2017 Grenfell Tower fire.

Opening the multi-faith service, Rev. David Hoyle, the dean of Westminster, said the loss and anguish was “still vivid and sharp.” As religious leaders read out the names of those who perished, the congregation said in unison: “Forever in our hearts.”

Prince William and his wife, Kate, joined hundreds of people for a separate service later Tuesday in the shadow of the tower.

The inferno at Grenfell Tower, a public housing building set in Britain’s richest borough of Kensington and Chelsea, horrified the nation and prompted many questions about lax safety regulations and other failings by officials and businesses that contributed to so many deaths.

The fire broke out in the middle of the night in a kitchen on the fourth floor of the tower and spread rapidly up the outside of the 25-story building like a lit fuse. Flammable cladding panels installed on the tower’s exterior walls have been blamed for how the fire raced out of control.

Firefighters from across the country formed an honor guard as local residents held a silent walk starting from the base of the tower.

That has frustrated many survivors and bereaved families. The Rev. Graham Tomlin, bishop of Kensington, said many families cannot move on until they find justice.

“They can’t find any sense of acceptance or integration of what’s happened in their lives,” he told Times Radio. “They can’t rebuild their lives until there’s a sense of justice, because people feel that something deeply wrong went on at Grenfell and yet no one has been held responsible for it.”

Officials have also issued new safety regulations requiring similar dangerous cladding to be removed from tower blocks across the country. But it’s an expensive job and the work hasn’t been carried out on some apartment buildings because of wrangling over who should pay.