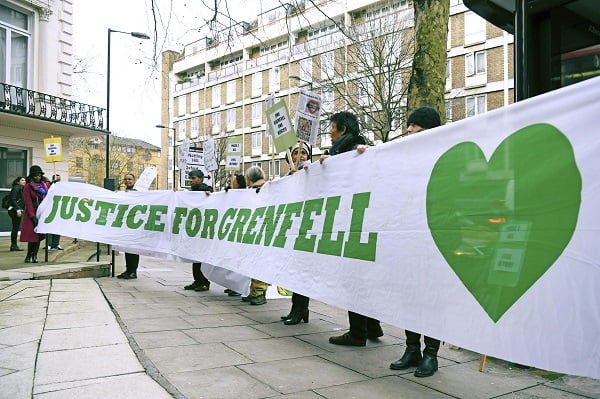 LONDON (AP) — The chairman of the inquiry into a London apartment building fire that killed 72 people wrote Britain’s attorney general Thursday to ask for a pledge to prevent evidence provided by corporate witnesses from being used in subsequent criminal prosecutions.

Martin Moore-Bick’s written request to Attorney-General Geoffrey Cox is an important development in the investigation into the 2017 blaze at Grenfell Tower, the deadliest fire on British soil since World War II.

Corporate entities involved in the building’s refurbishment before the fire have threatened to remain silent on the grounds they might incriminate themselves. Without their testimony, lessons that could be learned from the fire might be incomplete.

The attorney for the inquiry, Richard Millett, advised Moore-Bick to seek the witness immunity pledge. London’s Metropolitan Police are conducting a separate probe of the Grenfell fire for potential crimes ranging from gross negligence to manslaughter to health and safety violations.

“Without it, you will not get to the truth,” Millett said.

But attorneys for the victims objected, arguing that the demand for immunity — together with the last-minute timing of the request — suggested the firms were trying to derail the effort to identify the root causes of the disaster.

Lawyer Michael Mansfield said the “potential perpetrators of this inferno” are trying to “essentially dictate the terms in which they will provide their assistance.”

The firms argue that requests for immunity had occurred in other British inquires, such as the one into the 1972 Blood Sunday shootings, at the height of the so-called Troubles in Northern Ireland.

During the first phase of the inquiry, experts concluded that the refurbishment work failed to comply with building regulations. The second phase of the inquiry opened this week but stalled quickly when the lawyer for the inquiry noted that submissions from the firms involved in the work expressed “no trace″ of responsibility for the catastrophic fire.

High-rise towers are supposed to be designed to stop apartment fires spreading, but within minutes of starting, the flames raced up the outside of the tower like a lit fuse. The question is why.