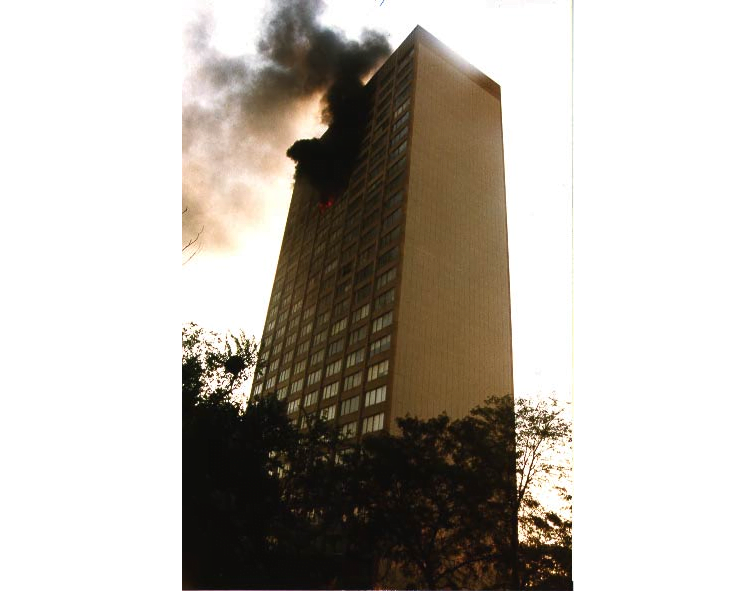 Disorientation and more in 1998

On October 12, 1998, while attempting a rescue, two fire fighters became disoriented in a smoke charged hallway on the 21st floor of a high-rise apartment building, ran out of air, and one of the two fire fighters (Captain on Engine 17, the victim) came close to death in this incident.

Read the Report:
Eight-Alarm Fire in a 27-Story High-Rise Apartment Building for the Elderly Nearly Claims the Life of One Fire Fighter

The fire started in the apartment of an elderly woman, and was reported as originating from an electrical cause or smoking in bed. The fire started shortly after 0900 hours, and the resident unsuccessfully attempted to extinguish the fire with glasses of water for a period of time.

She then called the front desk, reported the fire and exited the apartment, leaving the door open, and took the elevator to the lobby.

By the time the fire department arrived, the entire hallway on the 21st floor was fully charged with thick black smoke, and the fire had escalated, breaking out the apartment windows and allowing the wind to blow the apartment door shut.

Three oxygen bottles in the apartment, for the resident’s use, accelerated the fire growth when they exploded.

NIOSH investigators conclude that, to minimize the risk of similar occurrences, fire departments should:

NIOSH also concluded that municipalities should require all high-rise apartments for the elderly have sprinkler systems installed and operable wherever feasible.

Disorientation and more in 1998     NIOSH Fire Fighter Fatality Investigation and Prevention Program On October 12, 1998, while attempting a rescue, two fire fighters became disoriented in a smoke charged hallway on the 21st floor of a high-rise apartment building, ran out of air, and one of the two fire fighters (Captain on […]
