Light the Night for Fallen Firefighters to Shine Bright in 2020
 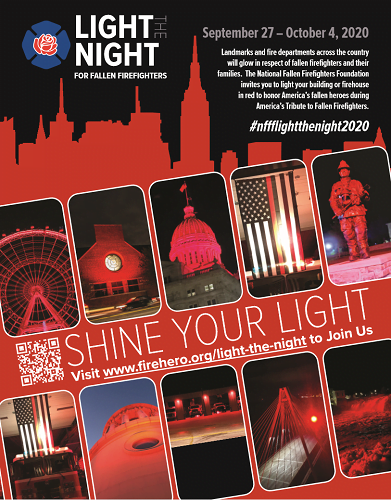 Communities, organizations, landmarks, and fire departments urged to participate in a week-long vigil before America’s Tribute to Fallen Firefighter

Landmarks who have lit in red previously include: One World Trade Center in New York City, the Willis Tower in Chicago, LAX in Los Angeles, and the Bank of America Plaza in Dallas. In 2019, over 300 landmarks, fire departments, and communities nationwide lit in red to honor their fallen brothers and sisters and you can too.

Communities, organizations, landmarks, and fire departments urged to participate in a week-long vigil before America’s Tribute to Fallen Firefighter     In these unprecedented times, where there is much uncertainty, we look for hope and find it in our nation’s firefighters who are still on the frontlines protecting us day and night. Each fall, we […]
