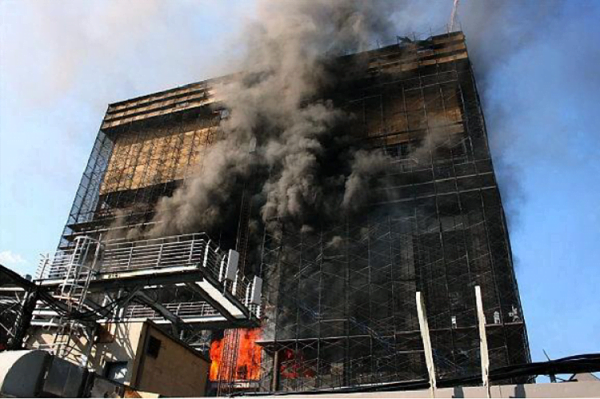 An hour into the incident, the fire department was able to supply water by running an external hoseline up the side of the structure. Soon after the victims began to operate their hoseline, they ran out of air.

The victims suffered severe smoke inhalation and were transported to a metropolitan hospital in cardiac arrest where they succumbed to their injuries.

By the time the fire was extinguished, 115 fire fighters had suffered a variety of injuries.

NIOSH has concluded that, to minimize the risk of similar occurrences, fire departments should:

– review and follow existing standard operating procedures on high-rise fire fighting to ensure that fire fighters are not operating in hazardous areas without the protection of a charged hoseline.
– be prepared to use alternative water supplies when a building’s standpipe system is compromised or inoperable.
– develop and enforce risk management plans, policies, and standard operating guidelines for risk management during complex high-rise operations.
– ensure that crew integrity is maintained during high-rise fire suppression operations.
– train fire fighters on actions to take if they become trapped or disoriented inside a burning high-rise structure.
– ensure that fire fighters diligently wear their self-contained breathing apparatus (SCBA) when working in environments that are immediately dangerous to life and health (IDLH).
– train fire fighters in air management techniques to ensure they receive the maximum benefit from their self-contained breathing apparatus (SCBA).
– use exit locators (both visual and audible) or safety ropes to guide lost or disoriented fire fighters to the exit.
– conduct pre-incident planning inspections of buildings within their jurisdictions to facilitate development of safe fireground strategies and tactics.
– encourage building owners and occupants to report emergency situations as soon as possible and provide accurate information to the fire department.
– consider additional fire fighter training using a high-rise fire simulator.

Manufacturers, equipment designers, and researchers should:

– ensure that construction and/or demolition is done in accordance with NFPA 241: Standard for Safeguarding Construction, Alteration, and Demolition Operations.
– develop a reporting system to inform the fire department of any ongoing, unique building construction activities (such as deconstruction or asbestos abatement) that would adversely affect a fire response.
– establish a system for property owners to notify the fire department when fire protection/suppression systems are taken out of service.