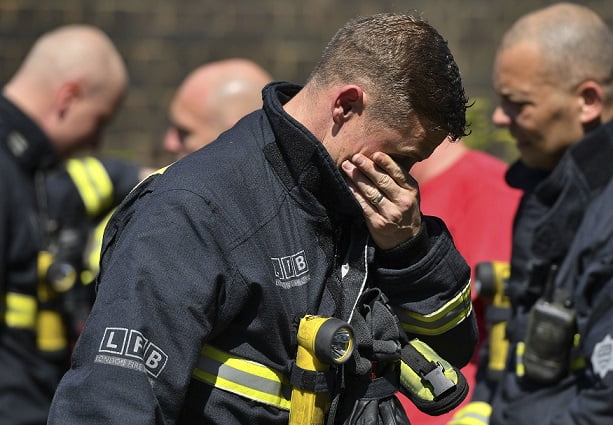 A firefighter puts his hand to his face as he looks at the floral tributes before a minute’s silence near to Grenfell Tower in west London Monday June 19, 2017. Tens of people died when a fire engulfed an high-rise apartment block in west London last week. (Dominic Lipinski/PA via AP)

LONDON (AP) — London police said 79 people are now believed to have died in the fire that swept through a high-rise apartment building last week, making it the deadliest blaze in recent British history.

Authorities increased the count Monday after spending the weekend working with families to identify all those who are missing and believed to have died inside the 24-story Grenfell Tower, as well as the five victims that have been formally identified, Metropolitan Police Commander Stuart Cundy told reporters.

Flames engulfed the building in less than an hour early on June 14, trapping many residents before firefighters could reach them.

London police late Sunday released photographs of the devastation inside the 120-unit building to show the public and frustrated family members why the search for victims is taking so long. The three photos show different views inside the charred, ruined wreck. The search and recovery operation is likely to take many weeks and some victims may never be identified because of the intensity of the fire, Cundy said.

“Sadly, for many families, they have lost more than one family member, and my heart truly goes out to them,” he said. “This is an incredibly distressing time for all of them. I’ve said before one of my absolute priorities is to identify people as quick as we can, to recover them from Grenfell Tower.”

The Grenfell Tower disaster is now the deadliest fire in mainland Britain since at least the turn of the last century.

It ranks above the fire at Bradford City Stadium on May 11, 1985, when 56 people died as flames swept through the wooden stands during a soccer game, according to the Emergency Events Database at the Catholic University of Louvain in Belgium. The group compiles natural and man-made disasters around the world from 1900 to the present.

Cundy was asked to describe the scene inside the building. Composing himself, he said “It’s fair to say it is incredibly emotional working in there.”

Britain held a moment of silence for the victims on Monday, with emergency service workers bowing their heads in respect. People applauded as firefighters walked past.

Two British ministers have said that exterior cladding used in Grenfell Tower’s recent renovation may have been banned under U.K. building regulations. Experts believe the aluminum composite panels, which contain a plastic insulation material, may have helped spread the flames quickly up the outside of the tower.

Trade Minister Greg Hands said Sunday the government is carrying out an “urgent inspection” of the roughly 2,500 similar tower blocks across Britain to assess their safety, while an opposition lawmaker urged the government to quickly secure any documents related to the Grenfell renovation for a criminal investigation.

Cundy said a criminal investigation began the day of the fire and will look at a “wide range” of issues, including the renovation project, the public housing block’s management and maintenance, and fire-safety measures. Cundy has promised to share with relevant authorities any issues that need to be addressed immediately to protect public safety.

“I’d like to reassure everybody that we will be looking at all criminal offenses that may have been committed by any individual or any organization,” he said. “We will go where the evidence may take us. And where offenses have been committed, I will do everything within my gift to ensure that those responsible are brought to justice.”

Anger has been mounting in recent days as relatives and community members expressed frustration with the lack of information about those still missing and the slow pace of efforts to find temporary housing for the hundreds of now-homeless tower residents.

British Prime Minister Theresa May, criticized shortly after the blaze for failing to meet with victims, says the public inquiry into the tragedy will report directly to her. She also says she will receive daily reports from the stricken neighborhood and has established a $6.4 million emergency fund to help the tower families.

British health authorities will also provide long-term bereavement counselling for those who lost loved ones in the tragedy.

"It's fair to say it is incredibly emotional working in there."
