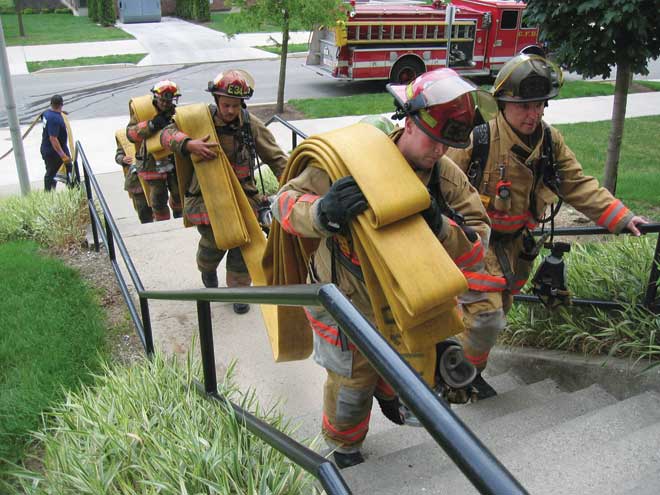 Some firefighters may think stretching 5" supply lines into buildings for an offensive fire attack is impossible or impractical. But with proper pre-planning, training and execution, it’s rather easy to do. Remember: We must be ready for anything the building or the fire throws at us, so it’s essential to think beyond the standard evolution and the pre-connected hoseline. (Figure 1) Photos Mike Kirby & Tom Lakamp

Creating an additional water supply, or temporary standpipe, is a tactic that you may never have to implement on the fireground, but it must be one of the tools included in your engine company’s toolbox. Why? On Feb. 23, 1991, three firefighters from the Philadelphia Fire Department (PFD) were killed at the One Meridian Plaza Fire, in part because of inadequate water flow at the outlet. Crews eventually stretched 5″ hose via the interior stairwells to augment water supplies for firefighting.

When to Use It
Unless pre-planned, this evolution is not the initial attack method of choice, but rather a secondary method if/when problems occur with a standpipe operation. It can also be used to supplement a master stream device in a high-rise fire.

Whether the building is four stories or 40 stories, numerous situations can occur in a standpipe standpipe equipped building that could necessitate an additional water supply system. These situations include:

Plan Ahead
Some firefighters may think stretching 5″ supply lines into buildings for an offensive fire attack is impossible or impractical. But with proper preplanning, training and execution, it’s rather easy to do. Remember: We must be ready for anything the building or the fire throws at us, so it’s essential to think beyond the standard evolution and the preconnected hoseline.

To establish any vertical standpipe, you’ll need additional personnel. For this particular water supply, you must have two firefighters per 100′ section of 5″ hose. A 100′ section of 5″ supply line weighs approximately 100 lbs. without water. It’s possible for a two-person crew to deploy an uncharged single section of 5″ supply line into a building via the interior stairs; however, it’s impossible to move the hose once it’s charged in the stairway, because it will then weigh about 950 lbs.

Get Rolling
To properly set up and perform this evolution, use the following steps as a guideline. With trained personnel, you should have water flowing in approximately 3 minutes.

The Finishing Touches
When you determine where to position the additional water supply, affix the appropriate wye device so crews can use multiple handlines and/or master stream devices.

Firefighters must make connections in the hose as it’s being stretched up the stairwell. Important: Make these connections prior to deploying the next section of hose in stretches that require more than one hose length. Bring a wrench to secure all connections.

Just as in other offensive operations involving standpipes, the 5″ hose stretch should come to an end at least one floor below the fire floor. If needed, consider stretching the 5″ into the hallway or common area of the floor below.

Pump adequate pressure into the hose from the supply engine company. Place an in-line pressure gauge at the discharge point of the wye to monitor pressure in the system, just as you would in a standard evolution involving a standpipe connection.

Final Thoughts
Although this evolution isn’t a standard tactic used by engine companies, it’s a viable alternative for moving 5″ hose vertically in a building that has a problematic water supply.

This evolution can also be used to rapidly move 5″ hose during horizontal evolutions where apparatus and personnel prohibit the standard supply hoselays.

Remember: Think outside the box, and train on laying 5″ hose just as you would in a real fire. Just as the PFD firefighters experienced back in 1991, sometimes the fire situation calls for an uncommon tactic to aid in extinguishment, and we must be ready.

Creating an additional water supply, or temporary standpipe, is a tactic that you may never have to implement on the fireground, but it must be one of the tools included in your engine company’s toolbox.
