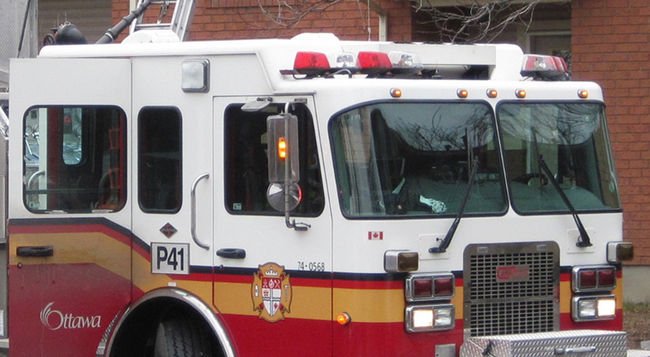 Residents of 16 apartments will be out of their homes for several days after an overnight highrise fire on Ramsay Cres.

The blaze was called in by several witnesses who saw smoke pouring from the 10th floor of the 15-storey building at 1065 Ramsay Cres., at about 11 p.m., Monday night. Fire crews found the flames in a garbage room on the floor, and the fire had moved out into an adjacent hallway.

It took crews about 45 minutes to get the fire under control, but flame and smoke damage had spread through several apartments on the floor. The 10th floor is currently uninhabitable, so residents who need temporary accommodations are being assisted by the Salvation Army and Red Cross.

Paramedics treated several people at the scene, and transported two people to hospital:

A pregnant 32-year-old female who suffered abdominal pain after a fall in the stairwell. She was reported in stable condition on arrival at hospital.

A 60-year-old man who experienced breathing problems and chest pains while being evacuated from the eighth floor. He was also reported in stable condition.

A man in his 30s suffered an ankle injury but did not go to hospital, and several scared children were also calmed and assessed.

Ottawa firefighters say the cause of the fire has not been determined. An investigator will be at the scene Tuesday morning.

Residents of 16 apartments will be out of their homes for several days after an overnight highrise fire on Ramsay Cres. The blaze was called in by several witnesses who saw smoke pouring from the 10th floor of the 15-storey building at 1065 Ramsay Cres., at about 11 p.m., Monday night. Fire crews found the […]
