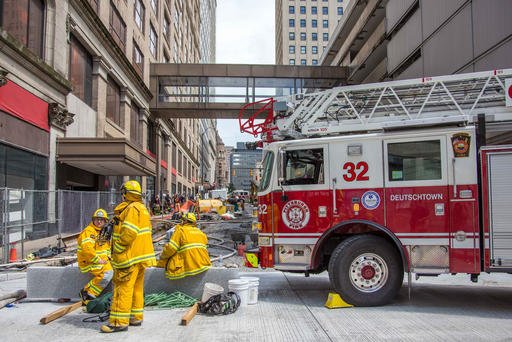 Pittsburgh firefighters work outside the former Macy’s department store while responding to a fire in downtown Pittsburgh, Saturday, July 30, 2016. A Pittsburgh public safety spokeswoman said the blaze Saturday afternoon started in a basement electrical vault and spread through an elevator shaft. She said everyone in the building made it out safely, and no injuries were reported. (AP Photo/Darryl Matevish)

Fire in a basement electrical vault sent thick black smoke billowing up an elevator shaft and into the air above the former Macy’s/Kaufmann’s building in Downtown Pittsburgh on Saturday afternoon, authorities said.

Department of Public Safety spokeswoman Emily Schaffer said the fire was reported about 1:30 p.m. and was declared a three-alarm blaze because the 13-story building is a high-rise. As firefighters arrived, thick black smoke and concern for construction workers who initially were unaccounted for prompted an increase to six alarms.

“Fortunately, all the workers inside were able to make it out safely,” Schaffer said.

The Macy’s store closed in September. Philadelphia-based developer Core Realty plans to convert the location to a hotel, retail space and high-end apartments.

Schaffer said firefighters were able to contain the fire to the basement and bring it under control, and it was extinguished by about 4:30 p.m. She did not know how far the fire extended from the basement at its peak or how much damage it did. No one was injured.

The building is under construction and isn’t required to have a working sprinkler system, but it did have working standpipes inside for firefighters to connect their hoses to.

Because the fire started in the electrical vault, workers cut the power to the building and some of its surroundings.

“The electricity went, and just as I was about to leave, they started pounding on doors, telling us we had to go,” said attorney Tim Uhrich, who had been at his office on the ninth floor of the neighboring Allegheny Building. “As I left, you could hear the alarms and smell the smoke.”

Police closed streets for several blocks around the building, which takes up an entire city block and half of another between the original store and its annex, which wrap around the Allegheny Building on two sides.

The first part of the current building, which was Kaufmann’s former flagship store and corporate headquarters, opened in 1898 at Forbes and Smithfield, with an expansion along Fifth opening in 1913 and adding an iconic clock.

It got an art deco first floor in a 1930s makeover, and its white marble-faced annex was built in the 1950s.

For generations of Pittsburghers, the Downtown department store was the place to go for shopping, hair styling at its salon and dining at the Arcade Bakery or Tic-Toc Restaurant.

Cincinnati-based Macy’s took over the Kaufmann’s chain through various department store buyouts and consolidations and replaced the Kaufmann brand in 2006.

It announced in July 2015 that it had sold the building to Core Realty for $15 million. Macy’s initially planned to maintain a smaller presence in the renovated building but later decided to close the store.

The city’s department of Permits, Licensing and Inspection will have to check the building before giving the go-ahead for construction to resume, Schaffer said.

No one from Core could be reached for comment.

Matthew Santoni is a Tribune-Review staff writer. Reach him at 412-391-0927 or msantoni@tribweb.com

Copyright 2011 Lexus Nexus. All rights reserved. This material may not be published, broadcast, rewritten or redistributed.

Firefighters were initially faced with a report of workers unaccounted for in 13-story high-rise.
