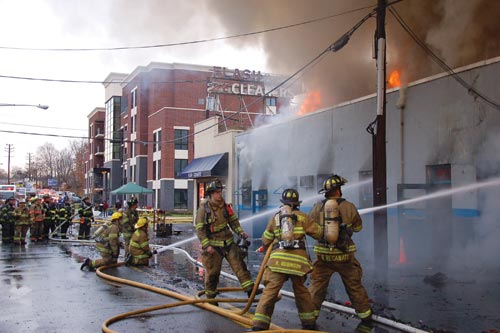 The 1 3/4" handline we typically use on residential fires isn't going to cut it on most commercial structure fires. Instead, we should employ a 2.5" line, as well as a solid-tip nozzle. Photo Bill Tompkins

In our last few Fire Attack articles, we discussed hosebed design and the water flow expected from the hoselines carried on an engine. Now that you know how your hose is carried and have a realistic idea of the amount of water it will deliver, we can begin to discuss proper hoseline selection based on structural occupancy. Remember: The occupancy of a structure—residential, commercial or industrial—refers to how the building is being used; this information helps determine the size and length of hoseline that you should place in service.

Residential Heat Release
Most residential structures have an ordinary or moderate fire load consisting of natural fibers (wood) and plastic material. Over the last few decades, the use of plastic materials for the production of consumer goods has increased the rate of heat release of many materials found in residential structures. An increase in the heat release rate normally requires us to prepare for rapid fire development; however, residential structures tend to have a compartmentalized design, which controls the size of the fire by limiting the amount of combustibles available as well as the amount of oxygen available to support combustion.

The compartmentalization of the building also creates more obstacles for the hose team, which must ensure the attack line is more maneuverable so it can reach the seat of the fire. As a result, the typical residential fire is usually controlled with one or two well-placed 1 ¾” attack lines flowing 175–200 gpm. We generally have great success with this tactic in residential fires.

The 1 ¾” Mistake
Unfortunately, we’re creatures of habit. When it comes to advancing a 1 ¾” attack line, we expect the same successful outcome that we get when fighting residential fires as we do when fighting commercial/industrial fires. This can be a costly assumption. The fire load within a commercial or industrial occupancy can be many times greater than a residential structure. The large open areas commonly found in commercial or industrial occupancies allow the fire load to increase dramatically, which allows the fire to burn unconfined and with an almost limitless supply of oxygen.

The sheer size of the structure may require longer hoselines to reach the fire, which may be beyond the reach of most pre-connects. The increased fire load and high heat release rate will also require you to use additional ammunition during fire attack to prevent fire progression. For these reasons, using a 2 ½” hose should be standard procedure for established fires in commercial occupancies.

The typical residential fire is usually controlled with one or two well-placed 1 3/4" attack lines flowing 175-200 gpm. We generally have great success with this tactic in residential fires. Photo Bill Tompkins

Nozzle Selection
Nozzle selection for fires in commercial or industrial occupancies is also important. When deploying a 2 ½” attack line in commercial occupancies, use a solid-tip nozzle. This nozzle will accommodate large water flows and will provide a longer stream reach, which will allow the attack team to attack the fire from a greater distance and will reduce their exposure to heat.

You can also use a broken-stream nozzle (not adjustable), which will provide the same or possibly even greater gpm as the solid-tip nozzle with less nozzle reaction, but it won’t provide the same reach as a solid-tip.

The Dead-Load
If your response area includes commercial/industrial occupancies, you may want to consider designing or reconfiguring your apparatus to support a pre-connected or dead-load 2 ½” attack line for rapid deployment. Three firefighters can deploy and maneuver this hoseline, which is a very versatile weapon as it has the flexibility to accommodate multiple commercial occupancy arrangements and building sizes.

That said, the dead-load 2 ½” attack line can be longer and therefore require the operator to break the line and connect it to the engine. Both the pre-connect and the dead-load will also require repetitive hands-on training to deploy successfully and will require more effort and coordination to advance on the fire.

Why use a 2.5? line? Because the fire load within a commercial or industrial occupancy can be many times greater than a residential structure. The sheer size of the structure may also require longer hoselines to reach the fire, which may be beyond the reach of most pre-connects. Photo Bill Tompkins

Our department now uses a 2 ½” line when fighting high-rise fires. Many departments changed their high-rise packs to 1 ¾” hose in the 1980s. Unfortunately, the standpipes that supply the water for high-rise firefights are designed for 2 ½” hose.

Most standpipe outlets are required to deliver between 65 and 100 psi, depending on when the building was constructed. Based upon flow testing in high-rise structures, using 1 ¾” hose (150 feet) with a 15?16″ tip will flow 112 gpm when supplied with 65 psi standpipe pressure. The same standpipe pressure will deliver 280 gpm when using 2 ½” hose and a 1 ¼” tip; the stream will have excellent reach and penetration capability.

Points to Remember
Always consider occupancy type when deciding which hoseline to advance into a fire building. Avoid using residential tactics on commercial fires. You may get lucky gambling on the 1 ¾” attack line, and you may get away with it a few times. But when you bet wrong, the fire will let you know.

Our department now uses a 2 ½" line when fighting high-rise fires. Many departments changed their high-rise packs to 1 ¾" hose in the 1980s. Unfortunately, the standpipes that supply the water for high-rise firefights are designed for 2 ½" hose.
