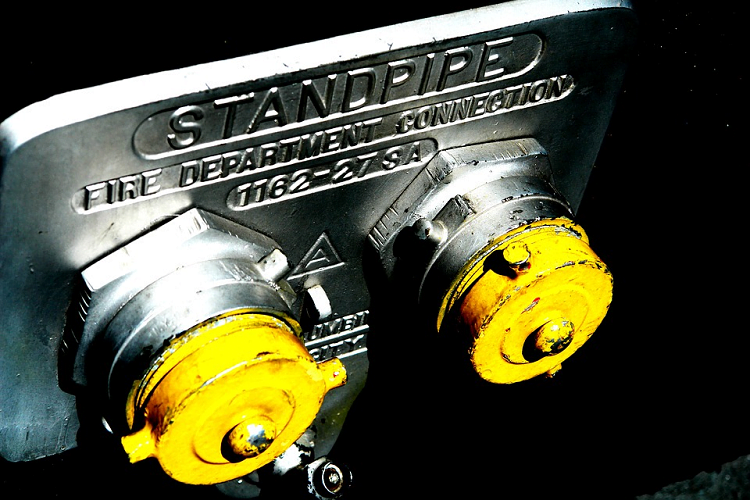 Don’t just go through the motions


Standpipe operations for many in the fire service do not happen on a regular basis. Few would argue that they are not low-frequency / high-risk events. It is for this reason that many departments train with some frequency on standpipe procedures. But, is that good enough? It is one thing to have a well-thought-out high-rise procedure but another to have a trained group of firefighters who have realistic expectations for standpipe operations. These expectations should be based on experience (whether first person or vicarious) and knowledge gained through testing and preincident analysis. Let’s look at some of the steps we can take before the fire that will give us the best opportunity for a positive outcome.

A topic that generates great debate around the firehouse kitchen table is line selection for standpipe operations. The most common debate involves the choice between the 2½-inch and the 1¾-inch. There is also the nozzle variable—should it be fog, solid, break-apart, automatic, or low pressure? The recent increase in the use of the two-inch hose muddies the discussion waters even more. Let’s look look at some of the pros and cons of these options and develop a strategy for its choice.

Hose size. The standpipe system was designed to be used with 2½-inch hose. One of its primary advantages is that it will flow the rated capacity of the outlet as designed by the fire protection engineer. This allows the first line to flow at least 250 gallons per minute (gpm) from any outlet on the system. The flow from two-inch hose is comparable, but it is still lower. When you make the change to 1¾-inch hose, the flow can drop significantly. It all depends on the friction loss coefficient of your particular hose. Some will argue that the 1¾-inch line takes less staffing to deploy. I would argue that no matter what the size of the hose is, it still necessitates that one firefighter move the line around a corner. The number of firefighters needed to advance the line does not necessarily decrease because the line is smaller. The 1¾-inch line is more maneuverable than the 2½-inch line, but this is at the cost of gpms.

Nozzle. The standpipe was designed to be used with a 1-1/8-inch tip solid bore nozzle requiring 50 pounds per square inch (psi) nozzle pressure. This nozzle will give you the reach and penetration of a solid stream and will also allow debris to pass and not clog the nozzle. The fog nozzle can be used in a straight stream, but the stream is made up of smaller droplets, which will be converted to steam at the cost of penetration. Debris can easily clog a fog nozzle, requiring that it be shut down and removed to be cleared. The danger of the automatic fog nozzle is that the nozzle will produce a good looking stream even at reduced flows.

The only way to know for sure what your hose will deliver is to flow test your set-up. Consider not only the buildings in your jurisdiction but also those in your mutual-aid agreements as well. If you have pressure reducing valves (PRVs) in your jurisdiction, select a hose/nozzle set-up that will function at the reduced pressures. PRVs prevent you from using your fire apparatus to increase the pressure and use smaller-diameter hoselines. Outlets are required to provide only 100 psi while flowing 250 gpm. Choosing a hose/nozzle set-up that requires more than that is asking for problems.

Hoseline length. Another issue to consider is hoseline length. Most standpipe hose packs I have seen are either 150 or 200 feet long. This is adequate to reach the seat of the fire in most situations. There are, however, a few variables to consider when deciding what length of hose to carry. First, evaluate the buildings in your jurisdiction. Look at the stairwell layouts. Are the outlets on each floor or on the half landings? Do you have a leader of 2½ or three inches connects to the outlet? Does the building have more than two stairwells? In a building with two stairwells, for example, one stairwell will be for fire attack and the other for evacuation. If the fire attack stairwell is not the one closer to the fire, the hoseline may not be long enough. Success will depend on having enough hose staged two floors below and the selection of the proper stair. The backup line will need to be longer as well, since it may need to be attached two floors below the fire. What if you need a third line? It will have to come from a second standpipe, also requiring additional hose.

One of the solutions is to use a gated wye attached to the standpipe outlet. What are we asking this outlet to do? Keep in mind that it is designed to flow 250 gpm at 100 psi. That means that the best-case scenario is that you are flowing 125 gpm through each line whether it is 1¾ inch or two inch. Yes, a standard outlet can flow more than 250 gpm, but is it designed to do this? Should we be surprised when that set-up doesn’t give us effective fire streams? The numbers do not add up.

Larger buildings may have additional standpipe outlets on each floor, not in a stairwell, to meet the spacing requirements in the code. That looks great on paper, but what is the reality of using that outlet? There have been close calls and line-of-duty deaths caused by firefighters using outlets on the fire floor. And, then there is the challenge of making the connections in an immediately dangerous to life or health environment. When deciding on an initial hose pack length, look at the buildings in your jurisdiction. Take a 200-foot rope with you, and play it out from the outlet on the floor below; see what you can reach and not reach. Use this information to decide what will work best. It doesn’t have to work on every building, but you have to have a plan for adding hose. Don’t just carry up 200 feet of hose. Be ready to extend the line. Each crew going up should carry hose sections until there is an adequate cache of hose staged upstairs.

Another operational consideration is the expected conditions in the stairwells. Experience and common sense tell us that when climbing the stairs at a working fire, occupants will be leaving the building in the same stairwell. One way to simulate this is to coordinate with a local building and climb the stairs in full gear with equipment during a fire drill. This will enable you to evaluate your hose pack with evacuating occupants. Visibility is another aspect of the conditions in the stairwell. When conducting standpipe training, do you add the challenge of limited visibility? Ideally, by using the outlet on the floor below the fire floor, the visibility will be good. However, history has taught us that that may not always be the case. Reverse stack effect can easily cause visibility in the stairwell to become obscured. At this point, the officer has some decisions to make: When does the crew need to go on air? What standpipe outlet should be used? Is the fire lower than you think it is in the building? If not and you choose to hook up on a floor more than one below the fire floor, how much hose will you need? These are all discussions that need to occur before the day of the fire. These are scenarios that should be trained on ahead of time.

The number of firefighters needed to control and extinguish a fire in a standpipe-equipped building will vary according to several factors. The size of the building and occupancy are just a couple. The thing to consider is what it will take for you and your department to put an effective firefighting force together. A part of the preparations for a high-rise/standpipe fire is to look at several of the buildings in your jurisdiction and burn it in the firehouse kitchen. “Take it to the board,” as we would say. Start making a list of the assignments needed and fill them with the crews on duty that day. Keep in mind that engine crews should be joined up to be effective in moving a line out of a stairwell. Be realistic about the numbers and staffing levels. Use the people on duty that day, not just an ideal number. Have a plan for getting the needed number of firefighters and chief officers on the scene. That might include mutual aid or calling in extra personnel from off duty. Just have a plan.

Let’s look at some of the red flags that should come up during the preincident planning phase with standpipe-equipped buildings. For high-rise buildings, the prefire plan should include whether or not the building has a 13th floor. Some do and some don’t, but we should know ahead of time. We should make note of any PRVs, what floors have them, what type are they, and if they can be adjusted on the fireground. Another feature that can be found is a master PRV in the pump room. It can be on an individual riser or an entire system. They must be identified and listed on prefire plans; include not only what is downstream of them but also possible troubleshooting options. Use the preincident plan to apply Murphy’s Law. Figure out what could break, which is anything, and come with a plan on how to deal with the failure.

Several aspects of standpipe operations need be discussed and trained on ahead of time. We have briefly discussed high-rise flow rates from hose/nozzle combinations, hoseline lengths, visibility concerns, staffing demands, and prefire plans. The challenge is to keep training realistic. Don’t just go through the motions. Take the time to go below the surface and really look at the challenges that will face your department if “that” building burns.

Kyle Smith is a lieutenant with Cobb County Fire (GA), assigned to Engine Company 19. He has been in the fire service for 20 years and worked in career and volunteer fire departments. He works as a consultant for a fire protection engineering firm specializing in big box retail.

Don’t just go through the motions   By Kyle Smith | Fire Engineering Standpipe operations for many in the fire service do not happen on a regular basis. Few would argue that they are not low-frequency / high-risk events. It is for this reason that many departments train with some frequency on standpipe procedures. But, […]
