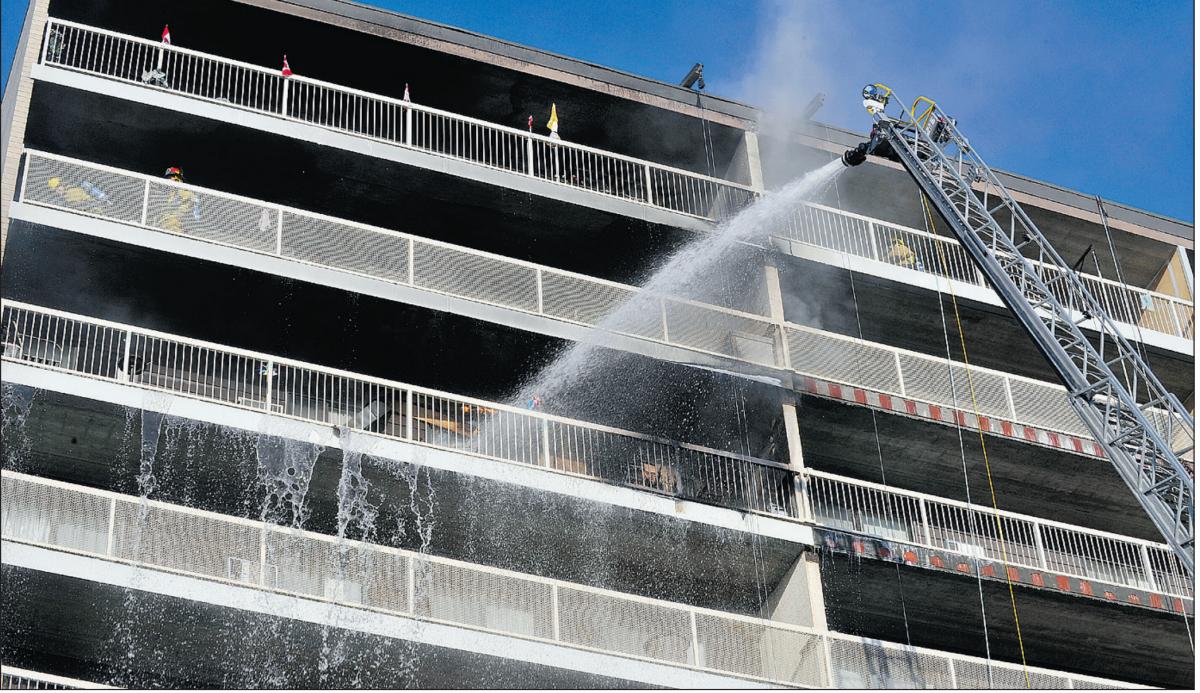 Regina firefighters evacuated more than 70 people from an apartment building Monday evening after a fire broke out on an eighth-floor balcony.

Nine fire trucks were sent to 2323 Hamilton Street around 6: 45 p.m. to fight the blaze, which was caused by a barbecue propane tank. Firefighters quickly contained the fire in less than an hour. Paramedics took four people to hospital with minor injuries.

Mohan Pridhivi rushed down nine flights of stairs after his friend saw the fire from his nearby apartment and called to alert Pridhivi.

“If this guy didn’t call me, I would have still been sleeping,” said Pridhivi, who was napping at the time the fire occurred.

After he got off the phone, he stepped out onto his balcony and saw the plume of smoke. “I put my clothes on and ran away,” he added.

Blaine Whitteker called 9-1-1 from his third-floor condominium across the street. Whitteker was sitting on his balcony when he saw a man on the eighth floor barbecuing. The grill suddenly caught fire, Whitteker explained, and he watched as the flames got bigger. He said the man tried to put the fire out, then attempted to unplug the propane tank.

“That was the first time I’ve ever seen anything like that,” Whitteker said.

Down on the street, a mixture of evacuees and passersby stood and sat on chairs watching the scene.

Trevor Brice, Regina Fire and Protective Services’ deputy chief of operations, said the fire remained outside the affected units. But it quickly licked up the railings and spread to the ninth and 10th-floor balconies. According to Brice, it caused limited water and smoke damage inside.

He estimated firefighters moved out between 70 and 100 residents within 30 minutes. Many were seniors.

“The evacuation was a success,” Brice said. “The firefighters worked really hard in the heat, and it was a successful outcome with just minor injuries.”

Paramedics set out blankets on the street in a makeshift triage area that didn’t need to be used.

Brice said Monday’s fire was the first in a while at a Regina high-rise apartment building.

As a paramedic wandered through the crowd taking the names of residents, Shirley Befus surveyed the scene. Her neighbours were all accounted for and she was waiting to be allowed back into the building.

“It’s kind of scary when you think how far (the fire) went,” she said. “It went three floors up, right on the roof.”

Brice said residents would be allowed back into the building after each suite was inspected for safety issues and water damage. He added it could take more time before those who live in the three apartments most affected by the blaze could return home.

Regina firefighters evacuated more than 70 people from an apartment building Monday evening after a fire broke out on an eighth-floor balcony.
