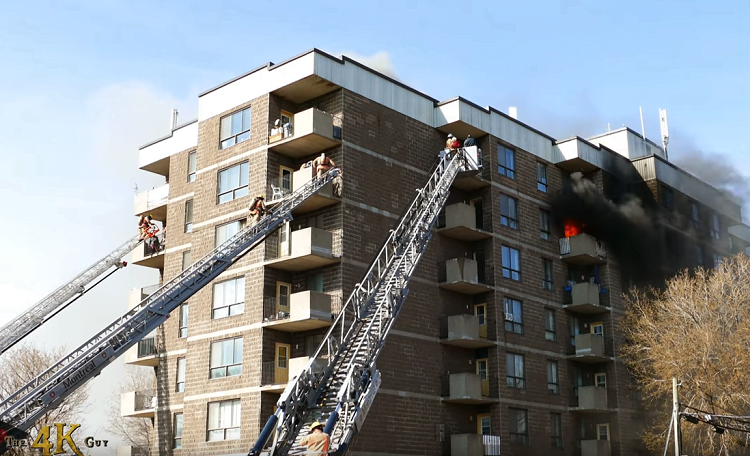 Fire showing from the sixth floor

At 9h this morning fire broke out at a senior home residence highrise building in Montréal, Canada killing one resident, believed to have originated in a kitchen during a cooking incident.

Numerous rescues were performed in the early moments of the intervention where firefighters can be seen helping residents out of the building. Flames could be seen on the 6th floor’s balcony raging out of a door opening at the high residential building located at the corner of Galt and Angers in the Sud-Ouest neighborhood of Montréal, Canada. SIM crews helped trapped people in distress climb from their balcony to firefighting ladders and all the way down to safety and into awaiting ambulances.

After initial reports were made by first due firefighters, the incident was deemed so dangerous that a second, third and fourth alarm was struck immediately. Moments later during the incident when the first fire chief arrived on scene, the fire was then upgraded to a fifth alarm partially due to the numerous necessary evacuations.

The serious fifth alarm blaze was confined to only one unit that is part of a larger 100+ unit social housing project made available at a lower rent fee for senior citizens and elderly people. No nurse or security agents are required to be present at the location where a woman in her 80’s tragically died today.

Urgences Santé paramedics intervened in high numbers and prepared accordingly for the worst case scenario. In a phone interview with US spokesperson Antoine Ortuso, we learned that a total of 7 people were transported to hospital in non life-threatening conditions.

He explains that one person died in the fire but was declared at the scene and was not transported to hospital and that on top of that, five people were assessed but refused transport. Ortuso explains that this incident was so serious that a “emergency plan” of a first level was activated, meaning that all paramedics on duty are required to help all hands on deck. Lunch breaks and pauses are delayed for the duration of the intervention until deemed safe to resume regular operations which was at about 3h pm today.

A first level emergency plan requires a scene management officer, seen in this video wearing a triage safety vest, so organize and coordinate each paramedics life saving efforts at the scene. Additionally, Ortuso says that three STM buses were deployed along with the SIM disaster victim portable unit and members of the Red Cross.

Fire showing from the sixth floor     The 4K Guy – Fire & Police At 9h this morning fire broke out at a senior home residence highrise building in Montréal, Canada killing one resident, believed to have originated in a kitchen during a cooking incident. Numerous rescues were performed in the early moments of […]
