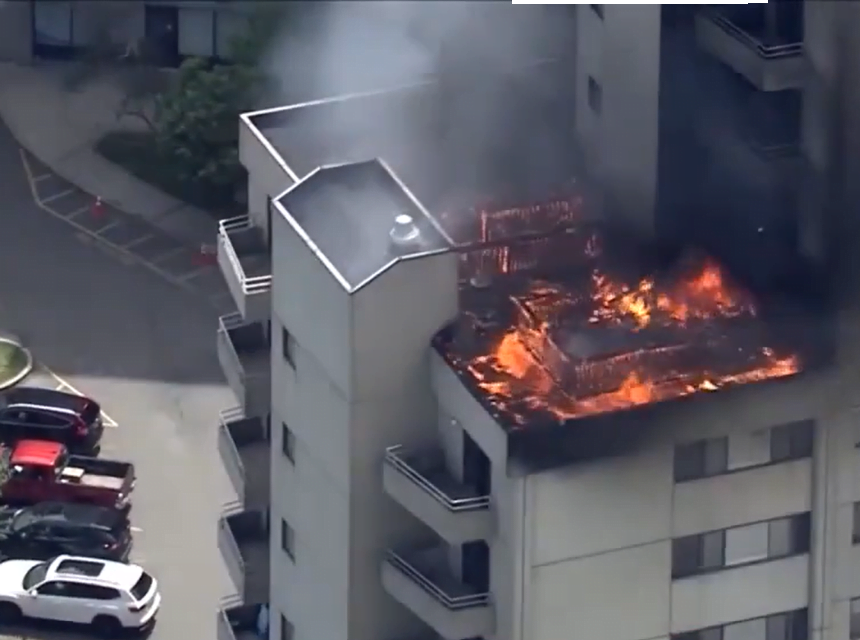 Jun. 22—REVERE — Firefighters knocked down a blaze at 370 Ocean Ave. in Revere Tuesday that prompted the evacuation of several floors of a high-rise apartment building in the city.

State Police troopers from the Revere barracks responded to the scene at 2:01 p.m. Tuesday to assist Revere police and fire evacuate residents from the high-rise apartment building, according to David Procopio, a spokesman for State Police.

Two troopers raced into the building to help evacuate residents, Procopio said, and as they were being “checked out” by Revere firefighters learned an elderly man with an oxygen tank was still in the building. The troopers then ran back into the burning building and were able to locate the man and bring him out of the building.

The troopers are “probably” going to be taken to Whidden hospital for evaluation, he said.

State Police shut down Ocean Avenue at Chester Avenue and Beach Street, according to Procopio.

Investigators assigned to the State Fire Marshal’s office are en route to Ocean Avenue to investigate the cause along with Revere fire, said Jake Wark, a spokesman for the fire marshal’s office.

Across the street, resident Naomi Chavez, 13, stood holding her dog next to her mother, Jennifer, and her grandmother, Ivez. Chavez said that she first thought something was wrong when she noticed something falling on her porch, and told her mother.

“I saw little pieces of I think the window or something. It was burnt and it was falling and it fell on our porch, so that’s how we found out. I told my mom that something fell and she went out and checked, and it was burnt and a little bit on fire,” Chavez said.

Resident Alice Hall, 77, was at the Senior Center when her coworker asked her for her address, and confirmed that her home was on fire.

“We were at the senior center, and we were coming out, and someone says ‘Alice, what’s your address?’ I told them, and they said ‘there’s fire in there’ so the bus drove us straight here,” Hall said.

Hall, who is physically disabled and wheelchair-bound, said she was worried that if the elevators weren’t working, she would not be able to access her 14th floor apartment. She said her cat, Sebastian, was in her home when the fire broke.

“I am [worried] because if the elevators don’t work I can’t get in there and check on my cat. Poor cat,” Hall said. “He gets nervous, he’s a rescue cat.”

Check itemlive.com for updates to this breaking news story.

Charlie McKenna and Anthony Cammalleri Jun. 22—REVERE — Firefighters knocked down a blaze at 370 Ocean Ave. in Revere Tuesday that prompted the evacuation of several floors of a high-rise apartment building in the city. State Police troopers from the Revere barracks responded to the scene at 2:01 p.m. Tuesday to assist Revere police and […]
