Shelter in Place Under Scrutiny After London Fire
 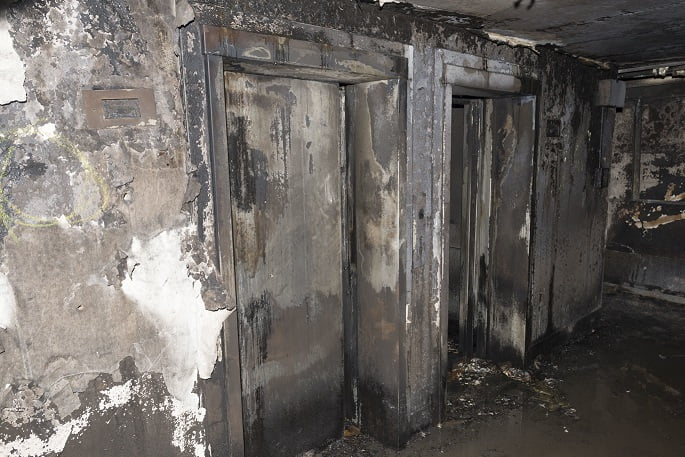 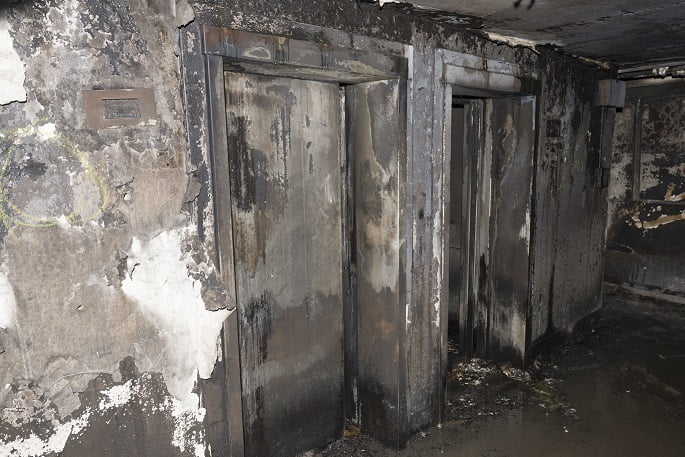 In this photo released by the Metropolitan Police on Sunday, June 18, 2017, burnt out lifts on an undisclosed floor, in the Grenfell Tower after fire engulfed the 24-storey building, in London. Experts believe the exterior cladding, which contained insulation, helped spread the flames quickly up the outside of the public housing tower early Wednesday morning. Some said they had never seen a building fire advance so quickly. The 24-story tower that once housed up to 600 people in 120 apartments is now a charred ruin. (Metropolitan Police via AP)

NEW YORK (AP) — A catastrophic blaze at a London apartment tower has brought new scrutiny to a long-accepted, counterintuitive rule for people in tall buildings: If the blaze breaks out elsewhere in the structure, don’t automatically run for the stairs. Stay put and wait for instructions.

That’s what residents of London’s 24-story Grenfell Tower had been told to do, but the strategy failed early Wednesday when flames that began on a lower floor spread shockingly fast and quickly engulfed the entire building.

Many residents were trapped, forcing some on higher floors to jump to their deaths rather than face the flames or throw their children to bystanders below. By Saturday, officials counted 58 people missing and presumed dead, including 30 deaths previously confirmed.

Despite that outcome, fire experts say “stay put” is still the best advice — as long as the building has proper fire-suppression protections, such as multiple stairwells, sprinkler systems, fireproof doors and flame-resistant construction materials, some of which were lacking in the London blaze.

“It is human nature for most of us — if we know there’s a fire, start moving and get out,” said Robert Solomon of the National Fire Protection Association, a U.S.-based organization that studies fire safety globally. “But we try to make sure people know there are features and redundancies in buildings that you can count on, and you can stay put.”

Most major cities with many high-rise buildings have detailed building codes and fire safety rules requiring several layers of protections in tall buildings. The rules vary from place to place, as does advice about when to evacuate, but fire experts say the “shelter-in-place” directive is usually applied to buildings of 15 stories or more.

Floors directly above and below the reported fire are usually evacuated, but others are to stay and use damp towels to block cracks beneath the door unless told otherwise, and call 911 if they have questions.

That’s partly to avoid repeated, unnecessary evacuations that cause people eventually to ignore such orders when they really matter. And it also avoids panicked and unsafe evacuations down a long stairwell choked with smoke, which can be just as deadly as the licking flames.

Several such high-rise evacuations over the years have resulted in needless deaths. In 2014, a man who fled his apartment on the 38th floor of a New York City apartment building died when he encountered a plume of suffocating smoke in a stairwell as he tried to descend to the street. His apartment remained entirely untouched by the flames.

What makes the London fire maddening for fire experts who believe in the “stay put” rule is that the Grenfell may have lacked many of the safety redundancies necessary to make it work.

For example, the Grenfell building had only one stairwell. A lawmaker says it didn’t have working sprinklers. And Britain’s Guardian newspaper reported that cladding used on the high-rise structure was made of the cheaper, more flammable material of two types offered by the manufacturer. 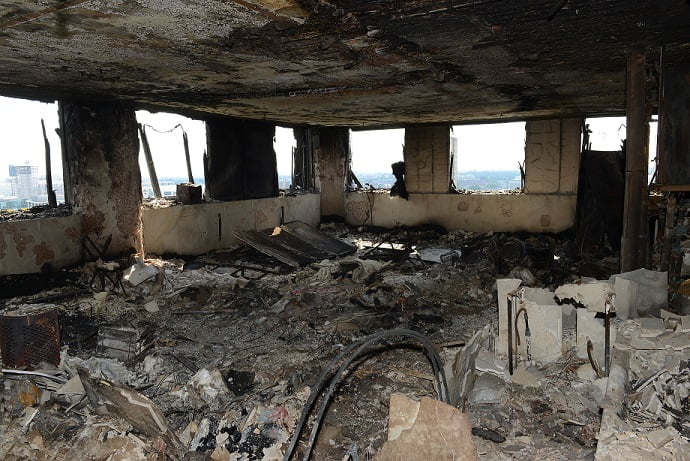 In this photo released by the Metropolitan Police on Sunday, June 18, 2017, a view of an apartment in the Grenfell Tower after fire engulfed the 24-storey building, in London. Experts believe the exterior cladding, which contained insulation, helped spread the flames quickly up the outside of the public housing tower early Wednesday morning. Some said they had never seen a building fire advance so quickly. The 24-story tower that once housed up to 600 people in 120 apartments is now a charred ruin. (Metropolitan Police via AP)

New York City Fire Commissioner Daniel Nigro, whose department is among the most practiced in the world at fighting fires in tall buildings, says he believes in the stay-put policy but “what happened in London, in which a fire went from the fourth floor to the 21st floor in what we understand was in 17 minutes, is unprecedented.”

The sister of a man still missing in the London blaze told reporters that when she phoned him on the 21st floor as the fire spread, he said he hadn’t evacuated with his wife and three children because fire officials told him to “stay inside, stay in one room together and put towels under the door.” Hana Wahabi said she begged her brother, Abdulaziz Wahabi, to leave but he told her “there was too much smoke.”

One question now is whether people will heed that guidance with the Grenfell disaster fresh in their minds.

“There is no way I am waiting to die in a building. I am getting out to safety,” said Jennifer Lopez, who works in a high-rise building a short walk from the World Trade Center in New York City.

Any move away from the shelter in place tactic would put lives at risk, said Simon Lay, a fire safety expert and fellow at the Council on Tall Buildings and Urban Habitat.

“Statistics tell us that defend in place remains the best policy and is based on sound principles as it enables firefighters to work unhindered and protects against the apathy that can develop from exposure to false alarms,” he said.

Jonathan Lum, an advertising executive who lives on the 57th floor of a glittering Manhattan tower designed by Frank Gehry, said if a fire breaks out there, he will heed the wisdom of the fire department and stay in his apartment, but partly because he lives in a building constructed in the past decade.

“If I were in a different, less modern building with less obvious fire safety, I’m not sure how I would feel, honestly,” he said.

One question now is whether people will heed that guidance with the Grenfell disaster fresh in their minds.
