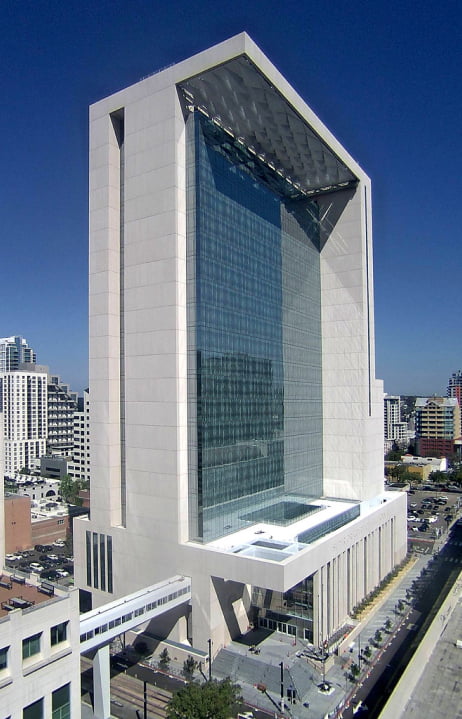 On three separate occasions since May, tempered glass panels at the downtown state courthouse have shattered, forcing court officials to construct a canopy around the high-rise building to protect people on the sidewalks below.

The unexplained breaks occurred both on the interior and exterior of the 22-story building, which occupies the square block defined by B Street, Union Street, State Street and C Street.

The state Judicial Council, the policymaking arm of the judicial branch that constructed and owns the building, is investigating what caused the breaks. In the email, Smyth and Roddy wrote there could be several possible causes, such as “impacts, impurities in the glass, high temperatures or other causes.”

The breaks have occurred on different sides and different floors of the building. Windows on the 10th, 12th and 14th floors have shattered or broken since May, according to court spokesperson Emily Cox. No one has been injured.

Blaine Corren, a spokesman for the Judicial Council, said the first incident occurred on May 16 when an exterior glass pane shattered in place — meaning it was not dislodged — on the 14th floor of the north, or B Street, side of the structure.

On July 5 an interior pane on the 10th floor shattered, also in place, on the west, or State Street, side.

The most recent shattering incident occurred on Aug. 4 on the opposite side of the building when an exterior pane on the 12th floor facing Union Street broke, Corren said.

The window fell out sometime before Aug. 8, with the glass falling eight floors to what he described as an interior rooftop service area courtyard on the fourth floor. No glass landed on the street or sidewalk below in any of the incidents.

Nonetheless, the state has decided to construct an 8-foot high sidewalk canopy around the perimeter of the building until it can determine what is causing the problem. Construction was intended to begin Tuesday but the state has not yet hired a contractor to do the work, Corren said.

Meanwhile, the state will try to figure out what’s causing the breaks. “The council is in the process of retaining experts to evaluate the window conditions,” Corren wrote in an email. “We do not know how long the investigation will take at this point but expect to have additional information soon.”

This is not the first problem with the windows at the building, which opened to the public in December 2017. A broken window on an upper floor along the north, or B Street, side of the building shut down the sidewalk there for weeks in early 2018 while awaiting a repair.

Then less than nine months after the opening, in September 2018, the court had to replace windows in 22 judges’ chambers because of a “crazing,” or extensive cracking, defect. The cost of those repairs was covered by the construction warranty of the contractor, Rudolph & Sletten.

Corren said there is no cost estimate yet for the window repair and canopy work but said the state will work to recover the repair cost and other related expenses from the contractor.

It is not known how long the canopies will have to remain in place. The two court executives said in the email that the effort to fix the broken glass panels is being affected by global supply chain problems that have delayed delivery of the replacement glass.

When the courthouse opened at the end of 2017, it was a year later than court officials had wanted due to a balky smoke control system that delayed approval by the state fire marshal. At the time it was the largest and most expensive courthouse built by the state.

Greg Moran – The San Diego Union-Tribune (MCT) On three separate occasions since May, tempered glass panels at the downtown state courthouse have shattered, forcing court officials to construct a canopy around the high-rise building to protect people on the sidewalks below. In an email sent Monday to judges and court staff, San Diego Superior Court Presiding […]
