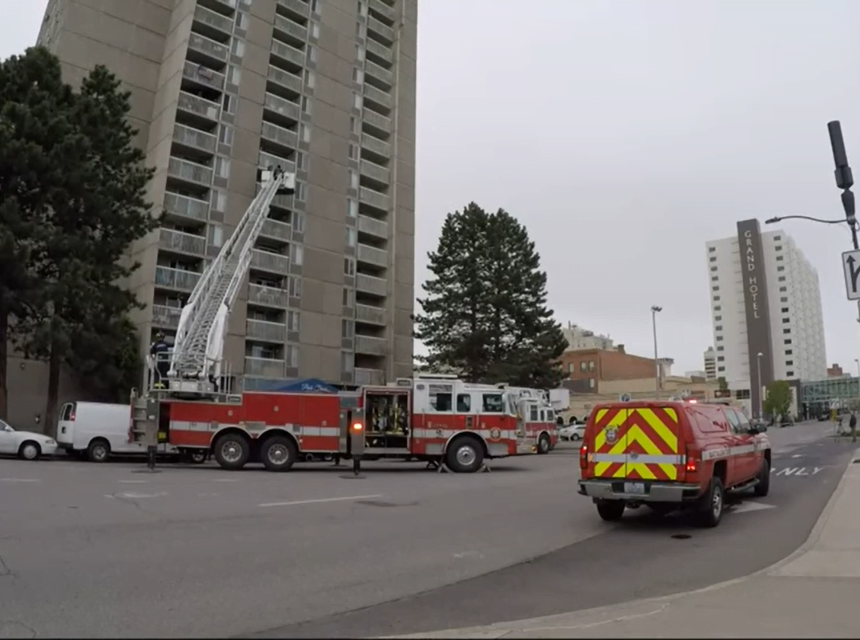 May 19—For the second time in two months, Spokane firefighters extinguished a fire on the ninth floor of the Park Tower apartments in downtown Spokane.

Two people were treated in the lobby of the 20-story tower at 217 W. Spokane Falls Blvd. after Thursday morning’s blaze, Fire Chief Brian Schaeffer said. He said one person was taken to the hospital with complications of smoke inhalation.

The occupant from the unit on fire reported seeing fire beneath a desk, according to a Spokane Fire Department news release. A caregiver was coincidentally at her door for an appointment and helped her escape.

Heat and smoke damaged one unit, and caused slight damage to the floor the unit was on, the release said. The cause of the fire is under investigation.

Roger Weatherford lives on the second floor and evacuated.

“I leaned out over my balcony and I looked up and I could see smoke coming out of one of the floors,” Weatherford said. “I didn’t know which floor at that time.”

Spokane Fire Station 1 is two blocks away from the tower, so firefighters were on scene quickly and climbed up to the ninth floor carrying heavy hose , Schaeffer said.

“All of that work plus carrying all the equipment, they did that in less than 10 minutes,” Schaeffer said. “So it’s pretty outstanding.”

Firefighters climbed all 20 floors to control the fire, search for residents and control the building’s utilities, according to the release. Firefighters assisted several occupants.

The tower has 184 units for residents 62 and over or those who have disabilities. The building is subsidized by the U.S. Department of Housing and Urban Development.

“This is one of our most high-hazard occupancies, lots of vulnerable people,” Schaeffer said.

Schaeffer expressed concerns last month that the building doesn’t have sprinklers, leaving the tower and its residents vulnerable. He repeated those worries Thursday.

“It’s only alarm (protected), which has always been my concern,” he said.

Firefighters rescued the man by bringing him out of his window, then down to the ground in a ladder truck basket, Schaeffer said at the time. Schaeffer said Thursday the man has since been released from the hospital. That fire started in a ninth-floor apartment and brought more than 70 firefighters to the building.

Garrett Cabeza  – The Spokesman-Review, Spokane, Wash. May 19—For the second time in two months, Spokane firefighters extinguished a fire on the ninth floor of the Park Tower apartments in downtown Spokane. Two people were treated in the lobby of the 20-story tower at 217 W. Spokane Falls Blvd. after Thursday morning’s blaze, Fire Chief Brian Schaeffer said. He said one person was taken […]
 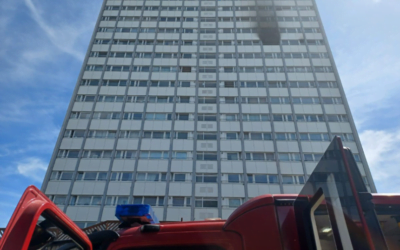 Fire Breaks Out at High-Rise Block in West London 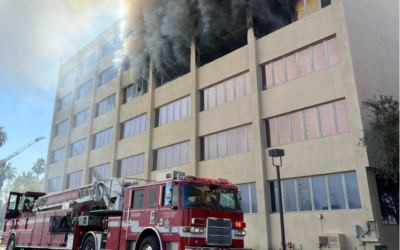 Josh Cain - The Press-Enterprise A three-alarm fire engulfed the fourth floor of the San Bernardino County Code Enforcement building on 3rd Street in San Bernardino on Sunday morning. Firefighters were summoned by an alarm triggered at 172 W. 3rd Street at about 9:30... 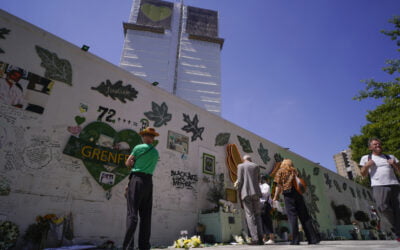 By SYLVIA HUI Associated Press LONDON (AP) — The names of the 72 people who died in a London high-rise tower blaze were read out Tuesday at a memorial service to mark five years since the tragedy, the worst domestic fire on British soil since World War II. Former...