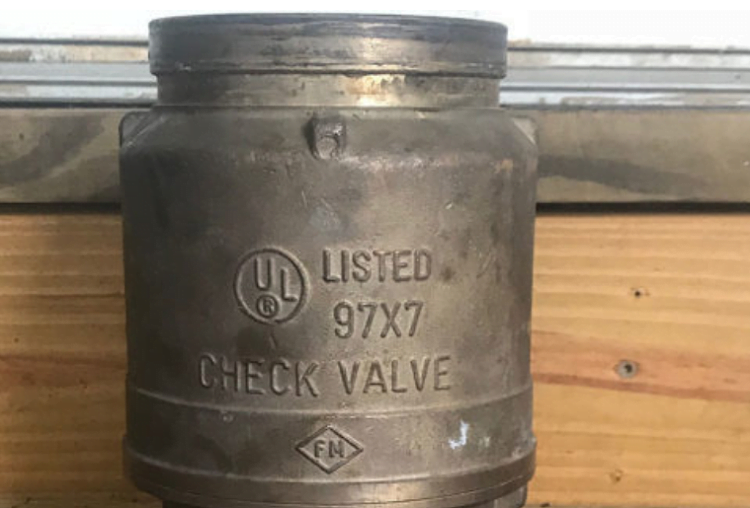 The first three parts to this series dealt mostly with issues for attack crews. However, standpipe systems are not just complicated on the attack end. They are also complex for the pump operator who has to supply the system. The pump operator must have the knowledge to effectively pump these systems under normal circumstances as well as an emergency.

One emergency that is often discussed in pump operator classes is what to do if the fire department connection (FDC) is broken or the female swivel is missing. Drivers are taught that if they cannot pump into the FDC that they should take their supply hose to the first-floor standpipe outlet and, by applying a double female to it, they can now pump the system. This only works if the system does not have pressure reducing valves (PRVs). Remember that PRVs are a one-way valve. Applying pressure from the outlet side will keep the PRV closed indefinitely. If the FDC is broken and PRVs are present, the pump operator should find the fire pump test header and make his connection to it. Someone will have to go to the fire pump room and open a valve to allow water to flow into the system. If building maintenance is on scene, take them along to help you figure out the system. 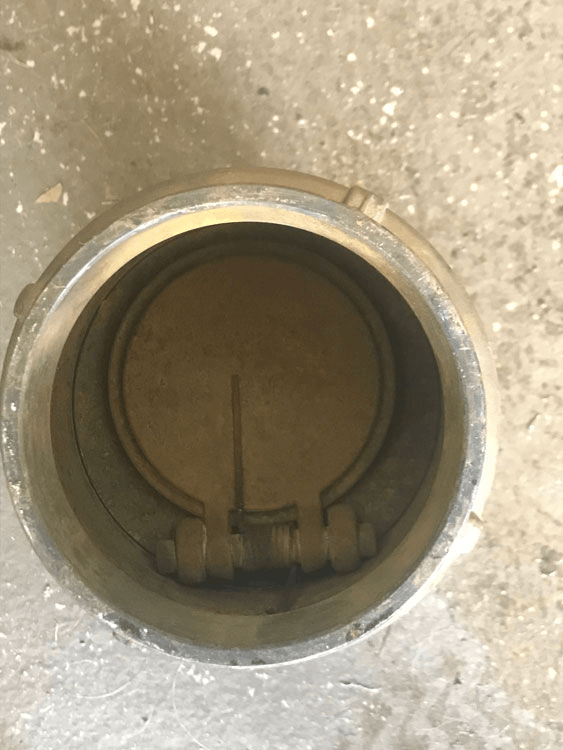 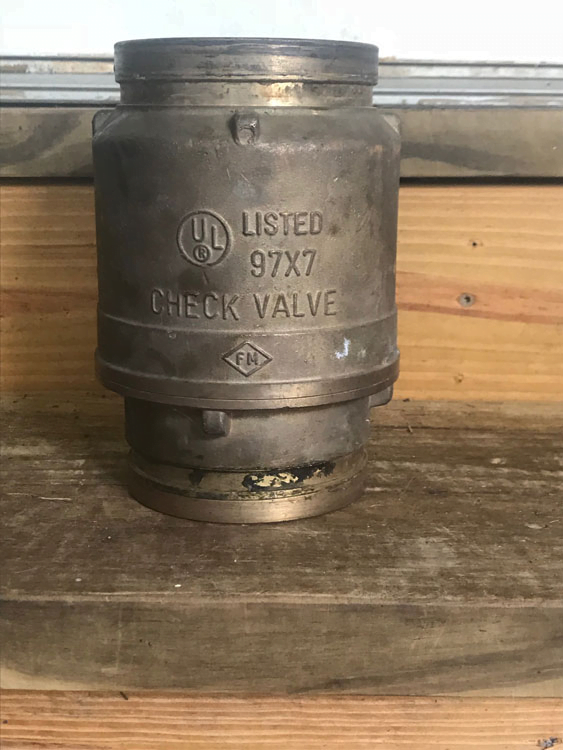 One of the least understood things concerning these systems is obtaining the proper pump pressure. All too often I hear and see these systems oversimplified. When asked what pressure to pump a standpipe system, the two most common answers I hear are the two textbook answers. The first answer is 150 psi. The second is to obtain needed pump pressure for your hoseline plus (the number fire floor – 1) x 5 psi. This is necessary to overcome the head pressure exterted on a check valve at the base of the riser (the height of the rise in feet x .434, usually rounded to 5 psi. Unfortunately, pumping these systems is much more complicated. Standpipe systems and combination systems that have PRVs require what is called “system demand pressure,” the pressure required to meet the requirements of providing the minimum outlet pressure at the most remote standpipe outlet. The pump operator must supply the system demand pressure for the system to work right. The fire pump doesn’t know what floor the fire is on. It has two speeds, “off” and “on.” When the pump kicks in, it is supplying the pressure needed for the most remote outlet. Each PRV along the system is set to operate properly with the system demand pressure. If the fire pump went out and you were not pumping the system demand pressure, then the PRVs will not operate at their set outlet pressures. Another fallacy that is often stated is that the pump operator should pump into the system to support it. This is not possible. You are either providing the pressure for the system or the fire pump is. There is a check valve (photos 1 and 2) where the FDC enters the system. If the building’s fire pump is providing more pressure than your engine, the valve will remain closed. Only when you pump more than the fire pump will the valve open.

How do we know the system demand pressure? There are four ways to obtain the pressure. The first way is from preplans. When doing preplans of your buildings, ask the building engineer. Fire pumps are required to be tested periodically. Ask when a scheduled testing is and attend it with your company. You will be able to see the pump discharge pressure during the test. The second is from placards at the FDC that state the system demand pressure. The third way is to send someone in the early stages of the fire to the fire pump room to check the discharge pressure on the pump. 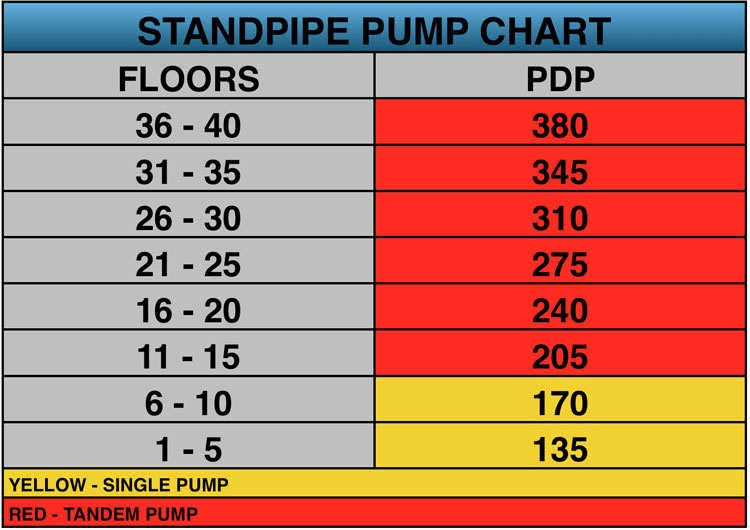 The final way is to develop an FDC pump card for your department. These pump cards are charts that takes the guessing out of your calculation and gives you a ballpark starting pressure that can be increased from there. Many departments keep them handy in the cab or in the driver’s compartment on the engine. To develop one for your department, look at your tallest buildings and find the average floor height on those buildings. In Birmingham, the average is between 13 and 14 feet. Other cities I have seen are consistent with those numbers. Remember that head pressure is 0.5 psi per foot. You multiply 0.5 psi x 14 ft to get 7 psi of head pressure per floor. The chart is divided into five floor sections. Add the minimum required outlet pressure of 100 psi for post 93 to the head pressure and you have a good ballpark pump pressure that can be increased as needed. Photo 3 shows a pump chart developed for Mobile (AL) Fire and Rescue by Captain Anthony Rowett Jr. Notice that it incorporates a color code to let the drivers know when tandem or relay pumping operations are required to boost pressure to meet system demands.

Once developed, use of these cards is quite simple. If the building is 23 stories tall, look for the block for floors 21-25 and pump the pressure in that box, in this case 275 psi. As you can see, this operation requires relay or tandem pumping. These terms seem to be interchangeable in some areas of the country and quite different things in others. In this sense it means having your first pumper pull up to the FDC and connect its 3-inch lines to the FDC. The second pumper connects to the hydrant and then stretches LDH to the FDC pumper. The relay pumper takes the incoming hydrant pressure and boost it to the FDC pumper. The relay pumper would pump 150 psi to the FDC pumper and then the FDC pumper would pump a discharge pressure of 275 psi into the building system.

Standpipe systems are often oversimplified but as you can see they are in fact very complex systems. Fire departments with standpipe systems need to make sure they are prepared to respond to incidents in these buildings. All the topics mentioned in these four parts are just the tip of the operational iceberg. Strategy and tactics to fight fires in these buildings is a whole other topic that departments must look at and be well versed in. Departments should prepare ahead and have proper standing operating procedure or guideline to make sure department personnel are capable of handling an incident in a high-rise or standpipe-equipped building. Training is a priority and recruit schools should incorporate high-rise training into their curriculum. It is my hope that readers can take the knowledge in this article and apply it to their current situation. Some changes can be made right away. such as changing your nozzle from fog to smooth bore, whereas others–such as moving away from 1¾-inch lines to 2- or 2½-inch–may take longer. Be the difference and make the change. Take the time to teach others around you about these systems so everyone will be better prepared when the box comes in.

Clay Magee is an instructor with Magic City Truck Academy and a Firefighter/Paramedic with Birmingham (AL) Fire and Rescue and Chelsea Fire and Rescue. He is currently assigned to Rescue 20 at Birmingham. Clay began his career with the East Oktibbeha Fire Department in 2004 while attending Mississippi State University. He has been with Birmingham Fire since 2013. He has a passion for forcible entry and high-rise operations. He holds a bachelor’s degree in business administration from Mississippi State University, an associate’s degree in Fire Science from Columbia Southern University, and multiple certifications from the Alabama Fire College.

Often oversimplified but in fact very complex     By Clay Magee | Fire Engineering The first three parts to this series dealt mostly with issues for attack crews. However, standpipe systems are not just complicated on the attack end. They are also complex for the pump operator who has to supply the system. The […]
