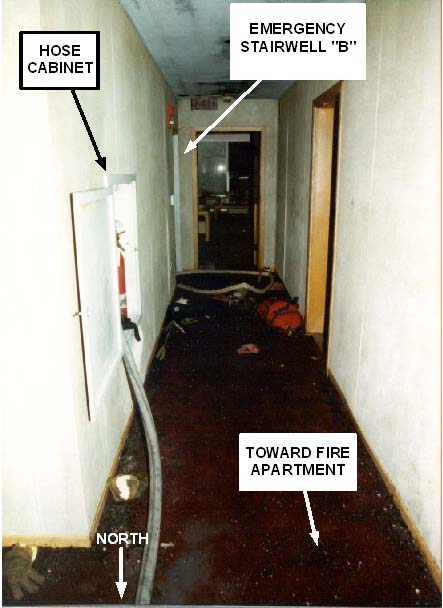 Exceptions to the rule are rare 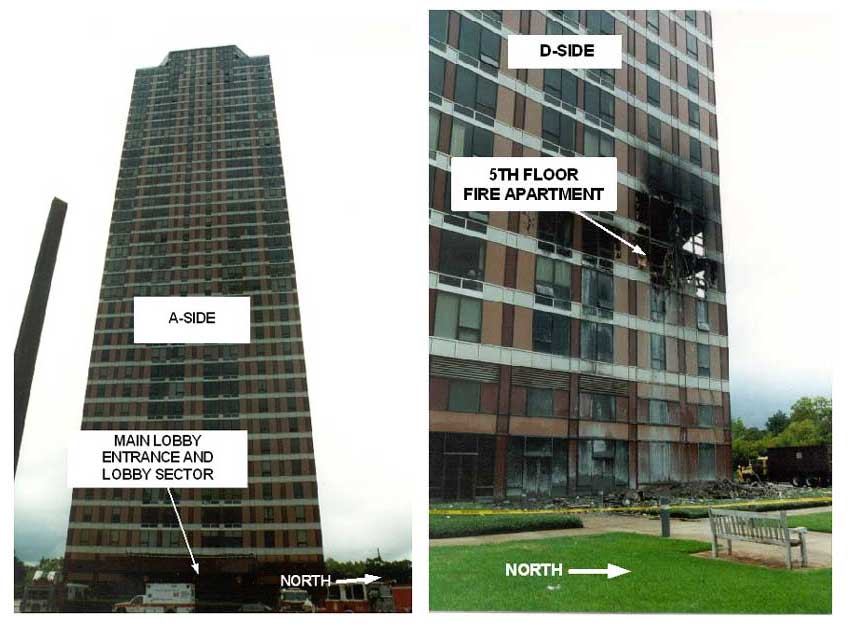 There is no “never” and “always” in the world of firefighting, but there are some pretty hard and fast rules, one of them being the location of standpipe hose connections in high-rise buildings. With very few exceptions, makes connections to standpipe hose outlets below the fire. Some exceptions include fires on lower floors or basements in standpipe-equipped buildings. In these circumstances, firefighters should stretch directly from fire apparatus. When stretching from the pumper, you have control of the unknowns that come with operating from a standpipe. When stretching from the pumper, you have a more reliable pump supplying the water (a fire department pumper) and you have a direct line to the outside.

Other exceptions to the rule of stretching from the floor below are fires in nursing homes and hospitals. For instance, if a fire starts in a linen storage room, firefighters can connect to a hose outlet on the fire floor nearest the fire to limit the spread of smoke to the smallest area possible because they will not have to wedge open smoke barrier doors to advance their hoseline. In this case, the risk to firefighters is worth the benefit of limiting the number of patients (who may be on respirators) who will have to be relocated.

Conversely, connecting to a standpipe outlet in a “big box” building is not worth the risk to firefighters for two reasons. First, often, these hose outlets are supplied by small-diameter pipe connected to sprinkler systems. These outlets are commonly connected to a rack of small-diameter and highly unreliable hose intended for occupant use, which can result in a delayed alarm while occupants put themselves at risk attempting to fight the fire. The second—and more important—reason not to use these outlets is if firefighters run low on air or get themselves in trouble, they will follow their way back to a hose outlet, not to a path of escape. Large structures where the distance of travel exceeds the “200-foot” rule. National Fire Protection Association (NFPA) 14, Standard for the Installation of Standpipes and Hose Systems, requires that all areas of the building be within 200 feet of a standpipe outlet in a sprinklered building. In non-sprinklered buildings, the distance is 130 feet. If the distance exceeds these numbers, outlets are required to be placed in the hallway. Excellent examples of this include schools and hospitals. Generally, these hallway cabinets are located near fire doors. It may be necessary to operate off of these hallway cabinets in these larger occupancies.

Firefighters may see no problem with hooking into the standpipe outlet on the fire floor and may have been successful doing so at previous fires. Unfortunately, someday, their luck may run out because they find a standpipe system in an older building that has outlets outside of stairwells such as in a hallway cabinet. Additionally, their plan of stretching uncharged hose in a stairwell may be thwarted by smoke because of the reverse stack effect.

Another consequence of connecting to an outlet on the fire floor is that the stairwell can become an area of low pressure, especially in wind-driven fire conditions. This can result in smoke and heat being drawn into the stairway, potentially placing the firefighter who is controlling the hose outlet on the fire floor landing directly in the flow path. At times, this tactic is also seen as a shortcut, not requiring as much work to flake hose out of and up the stairs or moving a charged hoseline up the stairs for advancement. In actuality, it creates more work because you have to flake your hose back down the stairs to still be in a safe position if heat and smoke have taken over the hallway of the fire floor.

The next option is flaking all of the hose up the stairs to the next floor, which will place the hose and the firefighters “humping” it in the flow path once they open the door to the hallway. The final option is to flake the hose out down a smoke- and heat-filled hallway before it is charged. I hope that anyone reading this can see the negative impacts of all these options.

One might say that all the previous examples include a smoke- and heat-filled hallways, and that it would be safe to make a connection if the hallway is clear and the fire is contained to an apartment behind a closed door. Although firefighters may maintain control of the door to the fire compartment, there are no guarantees that a tenant, security, or maintenance personnel will not open the door or police officers will kick it in while firefighters are stretching dry hose to the fire. Although your initial stretch could go well with no problems, once the fire apartment door is opened, smoke and heat will fill the hallway and travel to the attack stairwell, where the control firefighter is standing, monitoring the standpipe connection, requiring him to be on air, and (possibly) submitting him to excessive heat as well.

Another reason that firefighters often “hook in” on the fire floor is because they did not bring enough hose. Many departments have standpipe packs containing just 100 feet of hose. When hooking in from the floor below, as one should, firefighters can face stretches of up to 250 feet in length because of the 200-foot distance of travel not including a length of hose in the stairwell coming from the floor below. It is imperative that companies enter the building with a minimum of 150 feet hose and that subsequent engine companies bring 150 feet of hose as well. Don’t attempt a fire attack with insufficient hose or personnel; you will fail, and probably make conditions worse. Even on the largest, big-city fire departments advancing a charged hoseline from a standpipe require that companies “team up” to maneuver hose up the stairs and around corners.

Two fires come to mind when I think about this topic: The Four Leaf Towers Fire and the Vandalia Avenue Fire.

The Four Leaf Towers Fire occurred in Houston, Texas, on October 13, 2001, at around 0450 hours in the morning (photo 1). This incident led to the death of Houston (TX) Fire Department Captain Jay Jahnke.

First-arriving crews hooked their hose into a standpipe hallway cabinet on the fire floor (photo 2). During the attack, Jahnke became low on air and was attempting to follow the hoseline out and exit the floor. Jahnke and another captain followed the hoseline out, but Jahnke believed they were going the wrong way. The hose was flaked out in large loops by the elevator bank. The other captain advised him that they were going the right way, but Jahnke turned and headed back toward the fire. Jahnke’s body was eventually found near the elevator lobby.

The Vandalia Avenue Fire occurred in Brooklyn, New York, on December 18th, 1998, at around 0500 hours. The fire is a famous case study of a wind-driven fire that led to the deaths of three of the Fire Department of New York’s Bravest from Ladder 170. One of the key recommendations in the National Institute for Occupational Safety and Health’s Line-of-Duty Death report was that fire departments make sure to hook into the standpipe on the floor below the fire. One engine company attempted to make its connection on the fire floor stairwell landing and had to abandon its efforts because of the intense heat and conditions faced because the stairwell door had been opened at one point.

Each of these fires taught us to stretch from the floor below standpipe outlet. It keeps us in a safe location as we make our standpipe connection and allows us to flake out hose where we won’t have too much hose on the fire floor, which could cause confusion when attempting to follow the line out. We also learned that hose stretched from the floor below creates a lifeline straight to the safety of the stairwell.

Departments must have standard operating guidelines (SOGs) written and enforced. In most high-rise buildings, it is best practice to hook in on the floor below the fire when it is the safest option possible. Remember, the exceptions to the rule are rare and are specific to certain types of occupancies.

Exceptions to the rule are rare     By Clay Magee | Fire Engineering There is no “never” and “always” in the world of firefighting, but there are some pretty hard and fast rules, one of them being the location of standpipe hose connections in high-rise buildings. With very few exceptions, makes connections to standpipe […]
 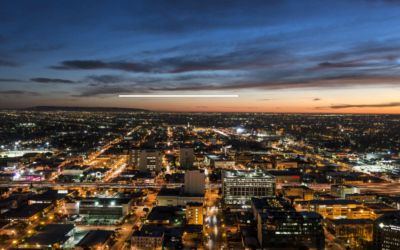 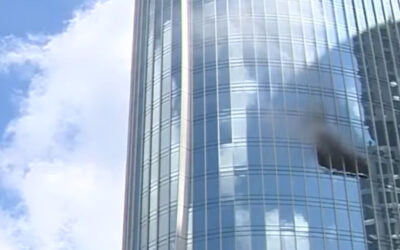 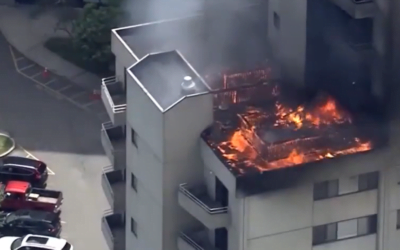