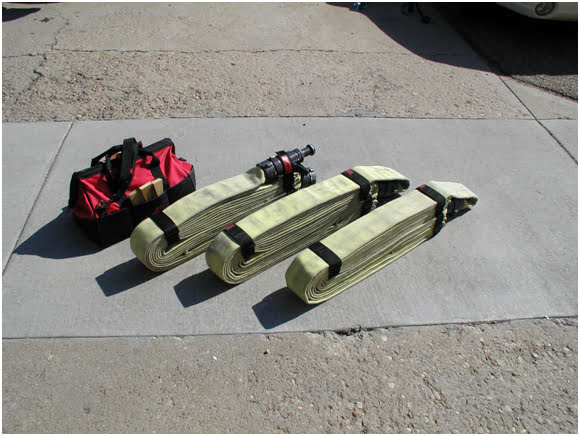 Welcome back, and thanks for staying engaged!

What you see showing from the street upon arrival might just be the “tip of the iceberg.” Because of significant reflex time at a high-rise fire, conditions on the fire floor could be much more significant by the time you get up there. Photo courtesy Eric Hurst, 5280fire.com

The fire conditions showing upon arrival may in fact be fire conditions that can be quickly and safely controlled by a properly supplied 1¾-inch attack line—if that 1¾-inch attack line is supplied by your pumper and pump operator (engineer), and within immediate reach of the fire area. Our most frequent type of fire—in a single-family dwelling, on the first floor, easily accessible by a 200-foot pre-connected attack line—is a prime example.

However, we must be multi-dimensional thinkers as we size up a fire problem, and make a conscious decision regarding weapon selection, especially at high-rise fires and other fires that require the use of a standpipe system.

Only when you consider these factors together with the fire conditions showing can you make an accurate assessment about the weapon you need. And, as you look up from the street and see fire showing from a 25th floor apartment window (see photo 1), the logical weapon selection is our high-volume, low-pressure weapon: the 2½-inch attack line.

Let’s consider this scenario with a bit more detail. Given ample oxygen and fuel, the fire is going to grow exponentially, likely doubling in size every half-minute. On your best day (or night), your reflex time to get to the 25th floor, properly stretch a line, get water, and initiate attack, could be 20 or more minutes. What if, at our next single-family dwelling fire, we arrive on scene, the engineer (driver) sets the air brake, but instead of immediately going to work, we stay inside the pumper for 20 minutes. Ridiculous? Yes, I know. But the point is, what’s that dwelling fire going to look like with no fire department intervention for 20 minutes?

Now put it back up on the 25th floor. Not so ridiculous, is it? Don’t forget, your 25th-floor fire problem is obviously going to require a standpipe system, and low system pressure is highly probable.

And that’s why a multi-dimensional approach is necessary for proper weapon selection at fires in high-rise and standpipe-equipped buildings.

Much of our time and work associated with training on 2½-inch hose is spent trying to convince the masses that 1) we need to use it, and 2) we can move it. So, with that said, if you believe it’s a necessary weapon, we must take the steps to make it doable.

In my textbook, I address several keys to success when using 2½-inch attack line. One of those critically important items is to create user-friendly high-rise/standpipe hosepacks.

Specifically, a high-rise / standpipe hosepack should be:

The high-rise/standpipe hosepack used by the Denver Fire Department (DFD), the “Denver Hosepack,” meets all of those criteria. The development of this hosepack started 20 years ago; since that time, the Denver Hosepack has undergone numerous revisions and minor alterations to enhance and improve its efficiency and effectiveness.

The weight of a hosepack is one of its most important characteristics. Historically, many fire departments have employed a one-size-fits-all hosepack. In other words, they carry a very large, bulky, heavy hosepack, usually consisting of several sections of hose and all of the other tools and appliances necessary to mount a fire attack using a standpipe system.

There are countless websites outlining gimmicks and methods for how to carry and deploy a standpipe hosepack; some suggest that we cram everything and the kitchen sink into a large, body-bag-like container and call it a hosepack. Have you ever weighed any of these ridiculous hosepacks? I certainly have, and some of them weigh more than 100 lbs. Who is carrying these gigantic packs up to the 25th floor? Yes, I know, the junior guy. Or we have a dolly for the hosepack. But what happens when the elevators are out of service? Crazy!

Rather than having a one-size-fits-all hosepack design (and one size does not fit all), I recommend that you assemble and utilize a modular equipment package. Specifically, the hosepack is not a single hosepack, but rather several hosepacks combined with a standpipe equipment kit (tool bag). The fire attack group (or team of firefighters), using teamwork, carries all of the equipment up to the point of operation in small, manageable and lightweight pieces. By doing this, we can take all of the necessary and appropriate equipment, but we divide the labor of carrying it up to the 25th floor (see photos 2 and 3).

Specifically, a DFD engine company is equipped with four 50-foot sections (a total of 200 feet) of lightweight 2½-inch hose assembled into Denver Hosepack configurations. In addition, engine companies carry a canvas tool bag with all of the necessary and associated tools and appliances to safely and effectively carry out engine company standpipe operations.

Denver Hosepack Step-by-Step (Check out the Image Gallery Below)


This is a finished Denver Hosepack nozzle section, with two straps on the male coupling/nozzle side of the hosepack, nozzle bail facing down and toward the hosepack. Photo courtesy Dave McGrail

OK, now let me give you the specifics of the Denver Hosepack. First, the DFD has specified and utilizes a lightweight hose for our high-rise/standpipe operations, Niedner Hose XL-800. (Note: I’m not the marketing director for Niedner, but I believe in providing resource information for other firefighters and fire departments in their quest to progress.)

The weight of this hose is approximately 20 lbs. per 50-foot section—and that is light. In addition, the construction of this hose lends itself to folding up tightly, into a very compact hosepack, meeting all of the desired criteria.

To properly assemble the Denver Hosepack, you start 32 inches from the outside of the female coupling. At this point, you bend the hose and start assembling the hosepack into a horseshoe configuration (see photo 4). It’s important to stop your hose folds short of the coupling, and don’t go past the coupling. In addition, the folds should be staggered—one long, one short—similar to the old-style accordion hosebed load. This helps keep the hosepack tight and compact (see photo 5).

When you have made all of the folds and come to the end of the hose, ensure that the male coupling ends up on the opposite side of the hosepack from the female coupling. At this point, you should have enough excess hose to attach the male to the female coupling, and tighten, but only with a couple of turns. This serves primarily to protect the male threads from damage during our day-to-day operations, such as carrying hosepacks numerous times in and out of buildings on fire alarms, burnt food calls, etc.

The company officer and two firefighters from DFD Engine Co. #3 equipped with the modular, standpipe equipment package. They divide the labor of carrying the appropriate equipment up into a high-rise building. Note: The DFD has a staffing of four to an engine; the fourth member (engineer/driver) would complete the standpipe water supply outside at the FDC. Photo courtesy Dave McGrail

The hosepack is held together and finished using three lightweight Velcro straps. Keep it simple here—once again, avoid crazy gimmicks and expensive gadgets. The best lightweight Velcro hosepack strap in the industry was designed and built by a brother firefighter from the DFD, Firefighter Brian Jenkinson. It’s reasonably priced (lower cost than any other straps I’ve seen out there), and very durable. Brian can be contacted at turningoutsolutions@comcast.net. Once again, I’m not the marketing director, but just someone passing out resource information. The strap in question is the 24-inch, red tab strap, designed for use with 2½-inch high-rise/standpipe hose packs (the Denver Hosepack).

The next step is very important. Place three straps on the Denver Hosepack. Two straps should be placed on the male coupling side, one near the top of the hosepack and one at the bottom. The third strap should be placed at the bottom of the hosepack on the female coupling side (see photo 6). The reason behind this procedure will be comprehensively addressed in my next article, which will address how to complete an apartment stretch for fire attack.

When placing the straps, remember to always place the bottom straps as close to the end of the hose as possible. This procedure will keep the hosepack tight and compact, and ensure that hose folds at the bottom don’t come loose and cause the hosepack to start coming apart before deployment. Also, train your firefighters to orient the straps in the same position when placing them on the hosepack. This makes it easier to quickly remove the straps during deployment, thus cutting additional seconds from our overall reflex time. A few seconds might not seem like much, but several seconds here and there add up to perhaps shaving minutes from our reflex time—meaning that we get water on the fire faster.

Of the four recommended hosepacks for an engine company’s high-rise standpipe equipment, three of the hosepacks can and should be assembled as previously described. In addition, I recommend that one of the four hosepacks is assembled into a nozzle section hosepack, with the nozzle pre-attached, thus shaving reflex time.

When assembling this hosepack, it is built in the exact same manner, except the nozzle ends up in a static position, on the opposite side of the hose pack from the female coupling. And, just like the regular hosepacks, any extra hose should be pulled back around to the female coupling side of the hosepack, and then tucked back into the hosepack between folds (see photos 7 and 8).

So there you have it. That’s how to properly assemble a Denver Hosepack. Key points to remember:

Give this a try, and let me know if you have any questions. Next time, we will deploy the hosepacks for an apartment stretch. Stay low!

Dave McGrail is a 30-year veteran of the fire service and assistant chief with the Denver Fire Department (DFD) assigned to District #2 in the heart of Denver’s busy downtown high-rise district. As a captain, Dave served as the company commander of DFD Engine Co. 3, and then Rescue Co. 1, two of the DFD’s busiest fire companies. He instructs internationally on a wide range of fire service topics, specializing in high-rise firefighting and engine company standpipe operations. Dave holds associate’s degrees in fire science technology/fire suppression and fire prevention and bachelor’s degrees in human resource management and fire service administration.