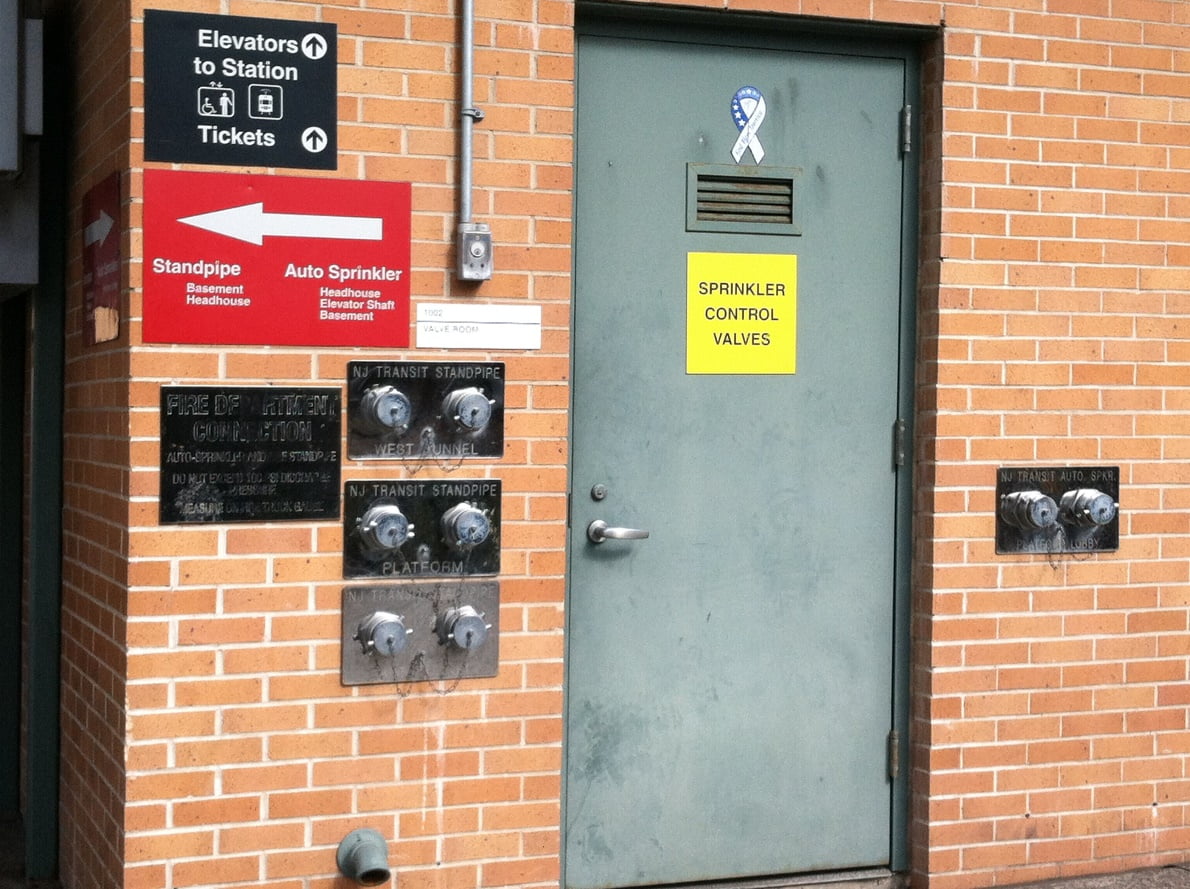 FARS possibilities beyond the high-rise building 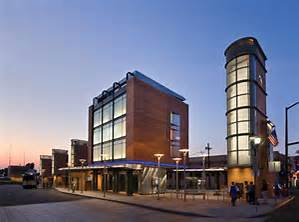 Light rail is very common throughout the country.  Many big cities use these types of systems to conveniently transport a multitude of commuters and visitors while reducing traffic and pollution.  Hudson and Bergen counties in Northern New Jersey are no different.  About ten years ago, the region initiated the Hudson-Bergen Light Rail (HBLR) with a series of developments that eventually brought the HBLR from the city of Bayonne on the southern tip of Hudson County through Jersey City, Hoboken, Weehawken, Union City, and finally to the western side of North Bergen where the line terminates at the Tonnelle Avenue station.  There are plans to connect this station to others that will eventually bring the HBLR to the Meadowlands (Met Life Stadium) and the Vince Lombardi Service Area at the northern termination point of the New Jersey Turnpike.

The HBLR runs along the riverfront area from Bayonne to Weehawken where it turns west toward North Bergen.  Most of Hudson County is built on top of the Palisades Cliffs, providing a spectacular view of Manhattan.  Part of the county sits on the Hudson River.  Another portion on the west side is at sea level.  The cliffs on the east side of North Hudson give way on the west side to steep hills in North Bergen, which lead to the Meadowlands. 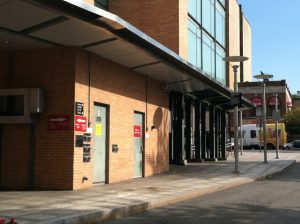 In order to run the HBLR to North Bergen, an old railroad tunnel was used that connects the waterfront in Weehawken with the meadowlands in North Bergen.  The tunnel runs beneath Union City, some 170 feet above the cliffs.  To make the HBLR accessible to the residents on the top of the cliffs, a station was built on Bergenline Avenue in Union City.  A shaft connects the station and the platform.  The shaft consists of three separate high-speed elevators, one stairwell that is 44” wide and the ductwork for the fire protection ventilation system. 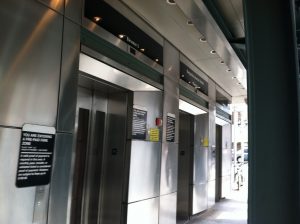 Elevators at the Bergenline Station 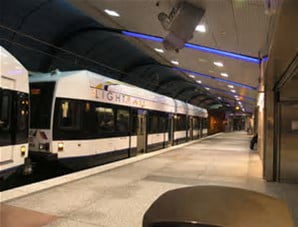 Bergenline Platform, 170’ beneath the bedrock below Union City

This Bergenline elevator shaft was created by boring through 170 feet of solid rock.  The platform is in the middle of the old rail tunnel, where trains stop on each side.  There is a distance of about a 2500’ between the platform and the Weehawken portal at the riverfront and a distance of 1200’ between the platform and the North Bergen portal at the Meadowlands.  Any emergency incident in the tunnel requires personnel to enter either from the portals or use the elevators (in fire service mode) from the Bergenline Station to the platform.

The passenger area of the platform is approximately 160’ long and separated lengthwise by a wall at the center.  This wall operates as a firewall during emergencies and has the capability of isolating the “safe” area from the “hazard” area, depending on which side of the platform the incident occurs.  In an incident, if the distressed train in question was a southbound train heading from North Bergen toward Weehawken, it would be expected that the “safe” side of the platform would be on the north side, while the “hazard” area will be on the south side.  The separating wall has three large openings, which allow the passengers to move from one track area to the other.  The large openings are equipped with fire-rated retractable doors.  These fire-rated doors are designed as a “door in a door.”  Passengers can move from the hazard side to the safe side of the platform when the system is down.  This is a critical life safety control area, provided the doors are working properly.

For suppression, there are standpipes that are supplied from each portal and at the Bergenline Station.  There is a control room where Incident Command is established at the station as well.  The Bergenline Station and the platform are protected by North Hudson Regional Fire and Rescue.  A response to an incident in the tunnel will bring NHRFR task forces to all three locations:  the Bergenline Station and the Weehawken and North Bergen portals.  Each task force consists of two engines, a Ladder, and a Battalion Chief.  Additionally, the Rescue Company responds to the platform along with the duty Deputy Chief, Safety Officer and Mask Service Unit.  There are communication capabilities all along the tunnel and in both the station and platform areas.  It is a very effective system.  It is state-of-the-art. 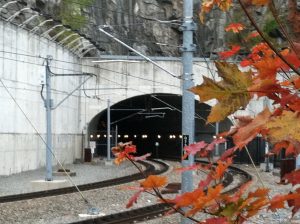 The Weehawken Portal at the Hudson River 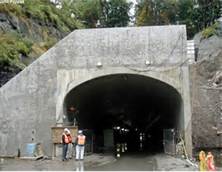 North Hudson Regional Fire and Rescue, which covers five cities along the North Hudson waterfront, has a comprehensive SOP, which includes several agencies in its scope, addressing Unified Command issues.  The plan calls for mountains of equipment to be brought to the platform and each portal.  There is even Nolan rail carts at each portal to move equipment and passengers out more easily if need be.  In fact, the plan for any evacuation is not through the elevators at the Platform, but via one or both of the portals.  The elevators are strictly for Fire Department use. 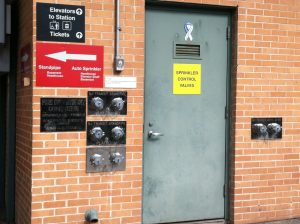 Standpipes at the Bergenline Station. A FARS air standpipe would be an ideal additional to the auxiliary appliances here.

The state-of-the-art system is designed with all the bells and whistles, but it is lacking in one area:  the ability to effectively deliver a continuous supply of breathing air to the working companies.  This structure is basically a high rise turned upside-down, with no windows and only one narrow stairwell that runs adjacent to the three elevators.  A FARS system located at the platform and at each portal throughout the tunnel would allow firefighters to replenish breathing air supplies without having to lug a bunch of air cylinders to the operational areas.  In fact, the primary fill mechanism at the track level would be provided by the air standpipe system that runs the length of the tunnel, allowing firefighters to refill their cylinders from an emergency fill panel without even having to take them off.  How cool!!  I cannot think of a better way to address the logistical needs required for SCBA than strategically placed FARS air replenishment stations in all areas.  This is just another example of the ways in which FARS can transform the significant challenges of getting air where it is needed to firefighters who are battling the biggest fires of their life. Someday, everyone will get it. 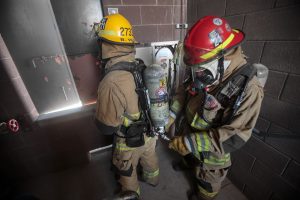 Firefighters refill cylinders via an Emergency Fill Panel, and are ready to continue operations without having to remove their SCBA or go “off air.”

This structure is basically a high rise turned upside-down
