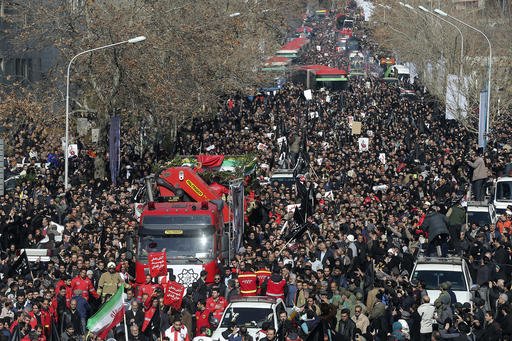 Iranian top officials pray before the flag draped coffins in the funeral of 16 firefighters killed in the collapse of a burning building on Jan. 19, in Tehran, Iran, Jan. 30, 2017. Tens of thousands of mourners gathered Monday at the Imam Khomeini grand mosque in northern Tehran before the bodies of the firefighters were transported to Tehran’s main cemetery. (AP Photo/Ebrahim Noroozi)

TEHRAN,Iran (AP) — Tens of thousands of mourners have attended the funeral of 16 firefighters killed in the collapse of a burning building in the Iranian capital earlier this month.

The crowds gathered Monday at the Mosalla mosque in northern Tehran before the bodies of the firefighters were transported to Tehran’s main cemetery.

Authorities say that 10 civilians were also killed in the disaster; the blaze was blamed on an electrical short-circuit.

The fire and subsequent collapse was the worst such disaster in Tehran since 2005, when a blaze at a historic mosque killed 59 people.

Tens of thousands in Tehran for firefighters’ funeral, euronews

The bodies of the firefighters were transported to Tehran's main cemetery.
