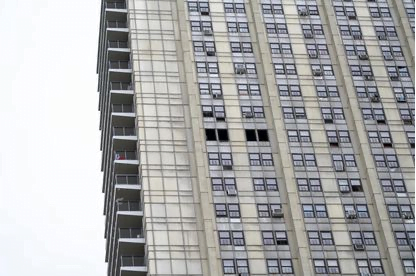 Fire on the 24th floor

The fire was reported shortly after midnight on the 24th floor of a 32-story building in Washington Heights, a Fire Department spokesperson said. More than 75 firefighters responded and brought the blaze under control in about an hour, the department said.

A 78-year-old woman and a 37-year-old woman were taken to hospitals suffering from smoke inhalation. Both were pronounced dead, police said. Their names were not immediately released.

A blaze erupted in the kitchen of a 24th floor of high rise apartment, just after midnight Sunday morning. Around 50 firefighters battled the blaze, bringing it under control just after 1 a.m. Tragically 2 civilians lost their lives because in the fire. pic.twitter.com/Xe54HRomPq

The fire was confined to one apartment, the Fire Department said. The cause is under investigation.

Fire on the 24th floor     NEW YORK (AP) — Two women died Sunday in a high-rise fire in upper Manhattan, police said. The fire was reported shortly after midnight on the 24th floor of a 32-story building in Washington Heights, a Fire Department spokesperson said. More than 75 firefighters responded and brought the […]
