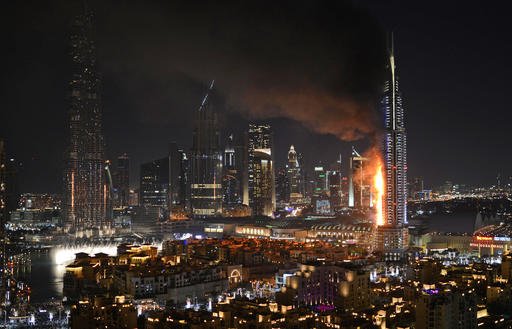 In this Thursday, Dec. 31, 2015 file photo, smoke and flames pouring from the Address Downtown Hotel in Dubai, United Arab Emirates. Officials in the United Arab Emirates are pondering how to change the country’s fire safety laws after a series of skyscraper fires, including a dramatic New Year’s Eve blaze seen around the world. (Sina Bahrami/@dearsina via AP, File)

DUBAI, United Arab Emirates (AP) — Dubai will supervise construction crews more strictly and monitor the material they use after a series of skyscraper fires, including a New Year’s Eve blaze that made headlines around the world, a top civil defense official said Wednesday.

Speaking to The Associated Press, the director-general of Dubai Civil Defense said authorities in the United Arab Emirates have been working on new fire safety regulations following the Dec. 31 inferno at the 63-story The Address Downtown Dubai.

While trying to downplay the danger, Maj. Gen. Rashid Thani al-Matrooshi acknowledged that at least 30,000 buildings across the nation have cladding or paneling similar to the kind that safety and construction experts have blamed for the rapid spread of the fires.

“There won’t be any radical changes, but instead we’ll come up with simple solutions that won’t affect the owners or traders,” al-Matrooshi said, speaking outside a fire safety technology seminar. “We’re finding solutions with the lowest costs on people, so that everyone benefits.”

While some types of cladding can be made with fire-resistant material, experts say those that have caught fire in Dubai and elsewhere around the world weren’t designed to meet stricter safety standards and often were put onto buildings without any breaks to slow or halt a possible blaze.

Since 2012, a spate of fires has struck Dubai and other emirates in the UAE. Though some ignited differently, the infernos all behaved the same way, rushing up and down the sides of the buildings, fueled by the external panels.

Police said that faulty wiring sparked the blaze at The Address Downtown Dubai fire, which happened as onlookers awaited a New Year’s Eve fireworks show on the towering Burj Khalifa. However, the cladding on the building provided kindling for the fire.

Dubai’s rapid growth, corner-cutting builders and regulators unaware of the danger the paneling posed made it “an unfortunate victim” for the fires, said Thomas Bell-Wright, the CEO and chief technical officer at the Dubai-based fire-safety tester Thomas Bell-Wright International Consultants.

“This was a collision of a massive building boom that was going on here and at the same time an attractive architectural finished product … came on to the market,” he said. “I’m sure there was some taking advantage of the absence or the lack of regulation and the regulators were not familiar with this product.”

Under the yet-to-be formalized fire safety laws, Dubai would work with builders to test construction material and supervise to make sure the same material went up on buildings, al-Matrooshi said. Officials will also work with owners of buildings already standing to mitigate the danger, though it’s unclear what that will mean, as retrofitting the structures could prove expensive.

But the danger of doing nothing always looms large among firefighters. Stephen Little, a battalion chief with the Chicago Fire Department who spoke at the seminar, offered the 1871 Great Chicago Fire as an example.

“We didn’t have really strict fire codes and as a result, we burned the city down,” he said.