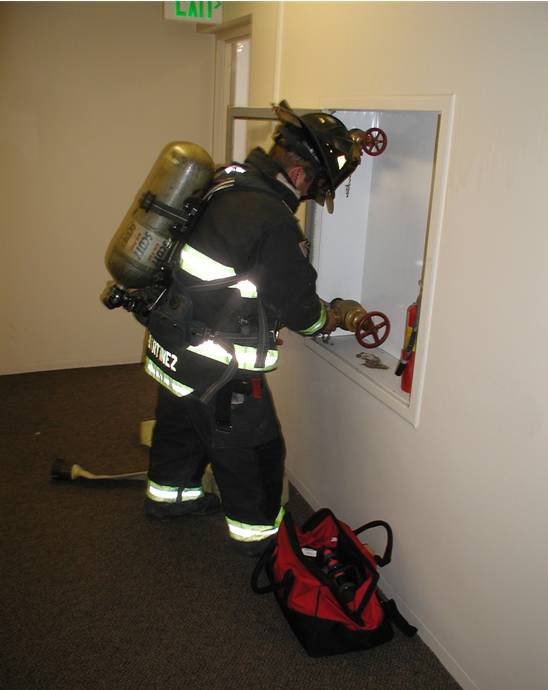 Unless you have flow tested a specific hose valve outlet, you simply have no idea what the flow pressure and volume are going to be. That’s why we must be prepared to face low volume and pressure. Photo courtesy Dave McGrail

There’s a long list of strategic and tactical priorities for firefighting operations in high-rise buildings. However, as with all fires, the need to get water on the fire, and control the fire, as quickly as possible, is by far the most critical component to a successful operation.

Don’t Trust the Standpipe System
My first piece of advice for firefighters, company officers and chief officers who respond to and operate at high-rises and standpipe-equipped buildings: Be very skeptical of the buildings’ built-in fire protection systems, most specifically, the standpipe system.

Upon arrival at a high-rise fire, or any fire in a multi-story building that will require a standpipe system for fire attack, there should be a huge question mark at the forefront of our fireground size-up analysis. That question is: Will this standpipe system perform as required to aide and assist us with fire attack, or will there be system failures, which might lead to operational failure? (Note: In many cases, part of the failure involves the size of hose that is brought into the building, on the false assumption that it will work in conjunction with the standpipe system.)

Take just one moment to do a quantitative analysis of the potential problem. Let me use my city as an example. In the city and county of Denver, there are more than 400 high-rise buildings (75 feet or greater above the lowest fire department access). In addition, there are hundreds of other standpipe-equipped low-rise buildings. All totaled, this represents a significant number of standpipe-equipped buildings, similar to what might be found in many jurisdictions across the fire service.

Unless you have flow tested a specific hose valve outlet, you simply have no idea what the flow pressure and volume are going to be, usually only discovering the facts of flow and pressure on the night you have a fire in that building. It would simply be impractical to conduct a thorough analysis of each and every hose valve outlet within each and every standpipe-equipped building in most cities. That’s why we must be prepared to face low system pressure.

The bottom line: The pressure of any standpipe system may or may not be sufficient enough to combat a serious fire.

Understanding Pressure
Although we cannot conduct a flow test of each individual hose valve outlet, we can utilize several pieces of reliable information to make an educated guess regarding the likely hose valve outlet pressure and volume.

We can begin to understand the low-pressure design of standpipe systems by taking a closer look at NFPA #14, which has for years has served as a guide for fire protection engineers when designing and installing standpipe systems. In a nutshell, NFPA #14 requires:

One need not be a hydraulics expert to clearly understand that there’s a finite amount of pressure, and that limited amount of pressure might not be enough to overcome the friction loss in small- and medium-diameter hoseline (1½” and 1¾”) and achieve the needed nozzle pressure to produce a safe and effective fire stream.

At the base of the triangle, serving as the foundation, is Standpipe System Pressure. Once again, this should be a huge question mark. We simply don’t have the precise and accurate information regarding pressure and volume at a specific hose valve outlet, unless we have previously flow tested it.

Forming the right-hand leg of the triangle: modern Fuel Loads. The dedicated firefighter, who spends time studying and learning how to do the job is keenly aware of the fact that the fires we fight today are more dangerous and complicated due primarily to modern fuels. Specifically, the increasing quantities of plastics and hydrocarbons that make up much of the modern fire environment create a situation where there is a higher probability of rapid fire development and a much more rapid heat release rate than ever before.

The last component of the triangle is time, or specifically, Reflex Time—the time needed to get a handline in position and in service, delivering water, in the form of a safe and effective fire stream, onto a fire on an upper floor of a high-rise building. How long does that take? Ask yourself the question, and give an honest answer. From the time your engine company engineer/driver sets the air brake at the street level, until the attack team is putting water on the fire on the 20th floor, how long is that? It could be 20 minutes or longer.

Choose the Right Weapon
As I said at the beginning, perhaps part of this overall failure of standpipe systems can and should be addressed by choosing the proper weapon to use when operating off a standpipe system. We’re talking high-volume, low-pressure weapon selection.

Ultimately, my final recommendation for you is this: Due to all of these low-pressure factors, we must equip ourselves properly, with the appropriate weapon, in order to have the greatest chance for success and safety during high-rise fire attack when utilizing a low-pressure standpipe system. Our greatest chance for success and safety requires the use of 2½” attack hoseline. It’s as simple as that.

Yes, we’ve all heard it before from the naysayers who have convinced themselves and others around them that 2½” attack hoseline is too hard to move. They make statements like “This isn’t New York,” or “We don’t have enough manpower to do that.”

Please stay tuned. In my next several articles, I will give you a proven recipe for success with 2½” hose for high-rise/standpipe operations. And yes, you can do it! But first you must believe, and then you must train. Next time I’ll introduce you to the “Denver Hosepack.” Stay low!

Dave McGrail is a 30-year veteran of the fire service and assistant chief with the Denver Fire Department (DFD) assigned to District #2 in the heart of Denver’s busy downtown high-rise district. As a captain, Dave served as the company commander of DFD Engine Co. 3, and then Rescue Co. 1, two of the DFD’s busiest fire companies. He instructs internationally on a wide range of fire service topics, specializing in high-rise firefighting and engine company standpipe operations. Dave holds associate’s degrees in fire science technology/fire suppression and fire prevention and bachelor’s degrees in human resource management and fire service administration.

Many factors contribute to high-rise building standpipe systems delivering less-than-adequate fire flows. Chief Dave McGrail explains some of these factors and why engine companies need to be prepared to overcome low flow pressure and volume from standpipe systems.
