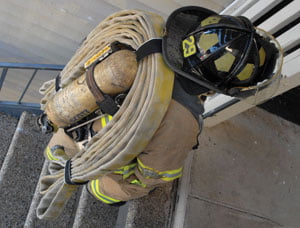 It is not big armies that win battles, it is the good ones.”—Maurice de Saxe

Package each 50' section of hose using DFD's horseshoe load so that it can easily be transported over an SCBA's air cylinder or shoulder. Tip: Use the lightest weight hose available to you. Photo Glen Ellman

Midway through 1944, approximately 3,000 U.S. Army infantry soldiers under the command of Brigadier General Frank D. Merrill joined forces with 20,000 specially trained Burmese jungle fighters to operate a counter offensive deep behind Japanese lines. These light infantry forces were known as “Merrill’s Marauders, ” and they were well trained, lightly armed and capable of independent and quick action. Their training emphasized physical endurance, a high degree of expertise and self-sufficiency, while the tactics they employed stressed the element of surprise, outflanking maneuvers and discipline. They were incredibly effective.

The military’s use of light infantry units has a direct correlation to today’s fire service and the tactics we use on the fireground. Light infantry forces are offensively oriented and provide a screen for the main body of infantry by aggressively finding and engaging the enemy. In the same vein, we sometimes employ a “light and mobile” fire attack where the main objective is to find the fire and hold it in check until reinforcements can arrive to augment the initial attack. To be truly effective, light and mobile fire attack must be combined with “interior recon”—determining the location and extent of the fire prior to committing resources.

In this article, I’ll discuss tactics that allow an engine crew to quickly move through a structure to find and attack the fire using recon and light and mobile attack strategies. You might be wondering, “Aren’t all fire attacks mobile?” Read on to discover how some are more mobile than others.

Before we delve deeper into light and mobile fire attack, we must identify the primary tool that permits a crew to quickly deploy a hoseline to the fire: a 1¾” hose pack.

A recon team should carry forcible entry tools, a thermal imaging camera (TIC) and a water can or two. But the most effective recon operation also dictates that a 1¾” hose pack either replace the water can or be added to the tools a team takes into the structure.

The LAFD has the unenviable task of fighting many of its fires in the city’s numerous center core buildings that have either unreliable interior standpipe connections or none at all. Consequently, the department has developed standard operating procedures (SOPs) designed specifically to address how an engine crew should quickly enter the building find the fire and get a hoseline into operation—a tactic LAFD calls above-ground hose operations.

Upon arrival to the incident, the officer and the nozzle firefighter proceed to the fire floor via the stairwell, taking with them a 2″ hose pack a rope bag and forcible entry tools. Upon reaching the fire floor, they drop the rope bag to the awaiting engineer, who selects the appropriate-size line (1 ½” 1 ¾” or 2 ½”) and extends it to the base of the building for the interior crew to haul up to its location.

The engineer leaves enough slack to allow for at least 100 feet of hose to be available for use on the fire floor. However, if necessary the hose pack initially taken in by the interior crew can be used to extend the attack line. From this point the interior attack crew makes its way to the seat of the fire.

One of the key components for this operation: the hose packs which are carried on all pumping and squad apparatus. They are made from two 50′ sections of 2″ single-jacketed reinforced plastic hose and are generally used to establish or extend lines in multi-story structures.

The DFD has modified this pack for use in its many high-rise structures. Essential in the hose pack’s development and use are five key tactical considerations:

Many departments, including my own, have adopted and used these packs to great benefit. DFD’s 2 ½” packs, however, may not be as suitable for a quick and mobile recon operation. But we can combine these two ideas for greater effect.

The hose pack for a light and mobile fire attack used in recon operations is constructed from three sections of 1¾” lightweight double-jacketed hose configured like the DFD’s high-rise packs (Figure 1).

This pack configuration enables a crew to remain mobile enough to conduct an interior recon operation and still carry enough hose to conduct an attack in the event they encounter fire. When constructing your recon packs, keep these key points in mind:

When to Use Light & Mobile Attack

Now let’s get back to the original question: What’s the distinction between a light and mobile attack and any other fire attack we employ? The answer: the criteria used to define the situations in which it’s used.

The first criteria for light and mobile attack: The location and extent of the fire is unknown. Clearly if we arrive on scene and we know where the fire is located, then we should have a more accurate gauge on the appropriate size line to pull and where to advance it.

The second criteria: The structure is a three- or four-story residential or hotel structure (nearly every community has at least one if not hundreds) like that shown in Figure 4. These buildings share the following characteristics:

These types of buildings lend themselves to crews getting inside quickly determining where the fire is located and coordinating with the engineer to move the rig to a location where a 2 ½” supply line can be hoisted. The other distinct advantage of these buildings: They almost always have at least one side of the building accessible to fire apparatus; therefore, a crew can enter a room on either side of the hallway and quickly get a supply line to the fire floor. More importantly, they can do so in relative safety while they connect the attack hose to the 2 ½” supply line.

Perhaps the best way to illustrate how the pack is used in conjunction with a recon operation is to visualize it in action.

Let’s say prior to returning to quarters after a quick DQ run, your unit gets dispatched to a reported structure fire at a nearby Residence Inn. Upon arrival there’s nothing showing from the structure. The building manager tells you that there’s light smoke on the third floor in the hallway but he can’t give an exact location. To make matters worse, your next-in unit is delayed by rush-hour traffic and is several minutes out. This is where the use of a light and easily deployable hose pack conjoined with a recon operation can be exceptionally beneficial and efficient.

After grabbing the recon pack, the TIC, a set of irons and a water can, you and your firefighter head up to the third floor, leaving the engineer and another member outside. When you arrive on the fire floor and open the door, you discover the corridor is charged with moderately heavy black smoke; you detect only a light heat signature on the TIC.

As you make your way down the hall and around the corner, the TIC picks up a slight heat signature originating from a room about halfway down the hallway, which you estimate to be about 100 feet from your present location. You and your firefighter make entry into a room that’s nearby but remote from the fire close the door radio the engineer to reposition the rig and send up a 2 ½” supply line with a wye so a connection can be made. As the rig is being repositioned the engineer should also locate a water supply; while the engineer assists you with hoisting the hoseline, the second outside firefighter should secure a water supply.

As the hoseline is being hoisted, your firefighter connects and flakes out the recon pack. Once all the connections are made and the hoseline is charged, you and your firefighter can now make entry into the hallway and advance on the fire (Figure 6). If the fire starts to spread and becomes too big for your hoseline, additional crews should now be on scene and can either connect to your 2 ½” supply line or bring in a line of their own to augment your initial attack.

Two safety notes: First, it’s important not to over-commit. Crews making entry must use extreme caution when operating without on-scene backup. Also, once the engineer locates the crew sends up the hose and charges it, they should immediately place a ground ladder to the window in the event a hasty retreat is needed.

This type of fire attack is similar to the LAFD’s above-ground hose operations, with one significant difference: The recon crew takes in enough pre-packed hose to affect a direct attack, leaving the wye in a secured location so that a second-in crew can connect its pack to the line and join the attack.

The main advantage of this type of operation has to do with reaction time. Imagine the same scenario except that the crew, instead of having a pre-assembled hose package at its disposal, either has to select a hose not knowing where the fire is located or has to recon the building find the fire and retreat until a hoseline can be advanced up to the floor by incoming crews.

The second advantage: the relatively large water flow that can be gained without compromising maneuverability. A minimum of six firefighters is needed to maneuver a 2 ½” hoseline down corridors and around corners. By using a 1 ¾” hose pack with the break-apart smooth-bore nozzle, you can achieve a flow rate of 185–200 gpm for your fire attack and still maintain a relatively high degree of maneuverability with fewer personnel.

Just as the Army has embraced the usefulness of light infantry units in combat operations, so too should the fire service adopt tactics that enhance our ability to quickly engage the enemy.

This operation is but one tool we have in our arsenal. By no means is it meant to be all-inclusive or appropriate for every situation or department. In fact, my hope is that this article will be a jumping-off point for us to debate, field test and build upon our operations. So let the debate begin!

One of the key advantages of using a light and mobile attack is that the hoseline is easier to maneuver and advance. For example, 100 feet of charged 2½” hose weighs 212 lbs., which can be difficult, if not impossible, for two or three firefighters to move. By contrast, 100 feet of charged 1¾” hose weighs roughly 104 lbs., making it much easier to move around corners and other obstacles.

Before we delve deeper into light and mobile fire attack, we must identify the primary tool that permits a crew to quickly deploy a hoseline to the fire: a 1¾" hose pack.
