Officials may not be able to identify all victims 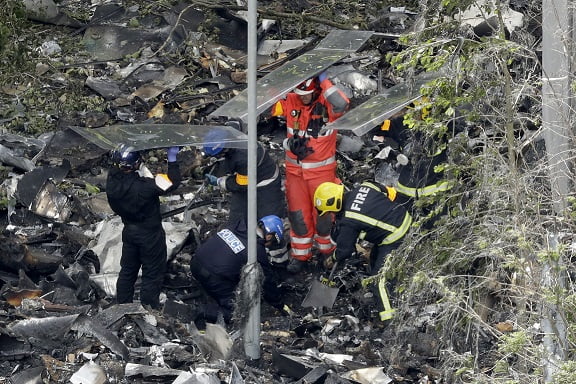 Emergency workers search debris that fell at the base of the fire-gutted Grenfell Tower in London, Friday, June 16, 2017, after a fire engulfed the 24-story building Wednesday morning. London firefighters combed through the burned-out public housing tower Thursday in a grim search for missing people as police and the prime minister launched investigations into the deadly inferno, with pressure building on officials to explain the disaster and assure that similar buildings around the country are safe. (AP Photo/Matt Dunham)
MARIA CHENG, AP Medical Writer

LONDON (AP) — The devastating fire that struck a high-rise tower in London may have been so powerful that it destroyed much of the DNA evidence needed to identify its victims.

As firefighters keep searching the charred ruins of the Grenfell Tower public housing complex with sniffer dogs and drones, Metropolitan Police commander Stuart Cundy said there was “a risk that, sadly, we may not be able to identify everybody.”

Experts said the intensity of Wednesday’s fire at the 24-story building will make naming victims extremely difficult, drawing comparisons to the 2001 World Trade Center terror attacks in New York, where 40 percent of the victims were never identified.

“When you have a fire that takes hold like that, that is literally an inferno. You get a lot of fragmentation of bodies, charring of bones and sometimes all that’s left is ash,” said Peter Vanezis, a professor of forensic medical sciences at Queen Mary University in London.

He said the temperature of the blaze at Grenfell Tower was comparable to a cremation.

“The longer a fire burns, the less chance you have that there will be enough DNA left to test,” Vanezis said. Still, he said if people were protected by any surrounding furniture or debris, it’s possible there might be some viable DNA.

Vanezis said the best chance to identify victims may be if officials find any remaining bits of teeth or bone, which are usually the last parts of the body to be destroyed. He said sophisticated techniques could be used to amplify the DNA, but noted such tests can only identify a person’s family, not the individual.

Vanezis added that medical devices like a pacemaker or any artificial implants could be used to identify people by finding their registration details.

Another complicating factor is that much of the DNA material that would normally be used to help pinpoint victims — like toothbrushes or combs — were probably also incinerated in the blaze.

“Even if we get some DNA, the question will be, do we have anything to compare it to?” said Denise Syndercombe Court, a forensic science expert at King’s College London.

In those cases, Syndercombe Court said experts would need a DNA sample from other family members or need to see if there are any reference samples available elsewhere, like a hospital blood or tissue test.

Syndercombe Court said even tiny fragments of teeth or bone could help, explaining that DNA tests can be run on as few as 10 to 20 cells. She said many identifications would probably be done via dental records, predicting that such samples would be more likely found from people who died of smoke inhalation, rather than those killed by the fire itself.

Syndercombe Court said the testing process would likely take months, as officials scour through remains, search for things like comparison DNA and go through a lengthy verification process.

“People won’t want to give up easily,” she said, adding that officials would likely also encounter other obstacles, like trying to find people who weren’t expected to be at the tower or differentiating between siblings where little DNA remains.

The timing of the fire — after the recent deadly attacks in Manchester and London — also doesn’t help.

“The capacity of labs to do this kind of testing is limited,” Syndercombe Court said. “They’re already working on forensic evidence from Manchester and London. This just adds to the backlog.”

As of Friday, London police said 30 people have died in the Grenfell blaze. Britain’s Press Association has reported that some 70 people are still missing after the fire, based on a compilation of verified reports.

This version corrects the style to World Trade Center.

"People won't want to give up easily,"
