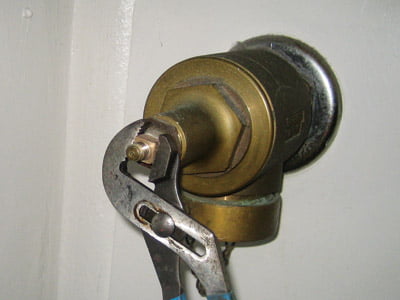 As we get water from the standpipe valves, the valve basically becomes the pump for our hoseline. The person controlling the valve becomes our "pump operator," who will have to adjust pressure and flow to ensure the proper flow of water. Photo Brian Meroney

When using standpipe valves during a fire attack, it doesn’t matter if the valves are in a four-story building or a 40-story building; multiple factors and issues can hamper our operations if we aren’t prepared for them in advance. One reason for this stems from the simple fact that hooking up hoselines to a standpipe outlet is very different than stretching pre-connected lines from the apparatus.

Standpipes 101
When getting water from a standpipe riser and the valve, the water often has to flow through a lot of pipe and across a great distance. This piping can either be dry or wet and is supplied from the local water utility, which may or may not have a fire pump to augment the pressure and flow.

But standpipe systems also have specific valves and fire department connections (FDCs) that enable us to manually augment pressure and flow in the system. As we get water from the standpipe valves, the valve basically becomes the pump for our hoseline. The person controlling the valve becomes our “pump operator,” who will have to adjust pressure and flow to ensure the proper flow of water, just as they would when working with a pumper/tanker. This person must also let us know if we have a pressure problem.

The most important tool when operating standpipe valves is the pressure gauge, which should be lightweight and have a protected face. Photos Mike Kirby

When on scene, prior training should also help us determine whether we have too much or not enough pressure for our standard fire attack lines. On a standard valve, pressure can be manually controlled by how much we open or close a valve, as long as there are no other defects or issues.

Through pre-incident preparation, engine companies can use their gauge on a standard engine company discharge and fine-tune what flow they can expect at various outlet pressures. They can also determine how much pressure they can safely handle from a system.

Valve Position
A second major issue with standpipes involves the valve position. Not every valve comes off the standpipe riser facing the ground; some come out sideways or facing up, while others are located in recessed cabinets. No matter the position, we need to prevent kinking of the hoseline at the valve, because a major kink can greatly restrict flow from the valve.

To help the hoseline make a smooth angle to the ground, you may need to use lightweight elbows, which are used for the same reason we use elbows on the discharges of our engines.

If the control wheel is broken, firefighters can easily remove it with a screwdriver or a pair of large channel-lock-type pliers. Photos Mike Kirby

Removing the Cap
On every valve thread, there should be a protective cap. Sometimes this cap is tightly secured, making it necessary for us to use a spanner or another similar tool to remove it. A standard spanner wrench often works well; however, if additional leverage is needed, an 18″ pipe wrench will also fit on standard 2½” standpipe caps.

After the cap is removed, you may find that the threads have been painted or are covered in built-up gunk. If this is the case, a simple wire brush works well to clean the threads rapidly.

Valve Control Wheel
The valve control wheel opens and closes the valve, but many times, firefighters have to use a great deal of force when opening the valve for the first time or when making adjustments, because it hasn’t been regularly exercised. When excessive force is needed, firefighters can use an 18″ pipe wrench to provide extra leverage.

If the control wheel is broken, firefighters can easily remove it with a screwdriver and replace it with a spare wheel or a pair of large channel-lock type pliers. The 18″ pipe wrench can also be used to open the valve by placing it directly on the valve stem.

Flushing the Valve
In many cases where routine tests/inspections haven’t been conducted, standpipe systems can develop corrosive deposits, which causes the pipes to narrow, much like what happens in human arteries. These corrosive deposits can break loose and move when water is flowing, but they can be flushed through the valve prior to making it to your nozzle. This is why it’s imperative to flush the valve prior to use. Doing this can also expel anything else that may have become lodged in the valve (garbage, cigarettes, etc). Note: Flushing the standpipe valve before connecting your hoseline may create some water issues in the stairway and the floor may become slippery, but ensuring you have an adequate water supply far outweighs these issues.

Remember: You’ll also need to flush dry  standpipes prior to connecting hoselines to expel the air in the system, which is much easier than expelling the air through the hoseline after it’s connected.
To flush out any debris that might break free in the system during operation, consider using a smooth-bore nozzle.

Conclusion
As you can see, there are a multitude of potential issues that can arise when working with standpipe valves, but there are also a multitude of tools we can use to mitigate any problems we encounter. And this holds true for any department; operating hoselines from standpipe valves isn’t just an urban concern. Buildings in many suburban areas and rural towns are also equipped with standpipes, so we need to ensure we’re prepared with the correct training and tools, no matter where we are.

When using standpipe valves during a fire attack, it doesn’t matter if the valves are in a four-story building or a 40-story building; multiple factors and issues can hamper our operations if we aren’t prepared for them in advance. One reason for this stems from the simple fact that hooking up hoselines to a standpipe […]
